Switch to WISH-TV for the Colts postgame show 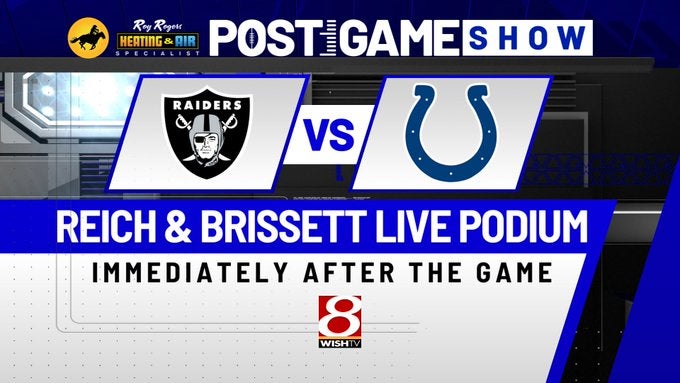 INDIANAPOLIS (WISH) — The Indianapolis Colts on Sunday fell 31-24 to the Oakland Raiders at Lucas Oil Stadium.

Switch to WISH-TV now for highlights, interviews and analysis during our postgame show!

POLL: How would you grade the Colts’ performance so far against the Raiders?

Colts and Raiders. Brissett and Carr. That’s the matchup Sunday for Week 4 at Lucas Oil Stadium.

Open season for Brissett after coming off his best game as a pro and T.Y. Hilton is questionable with a quad injury.

Darius Leonard will sit for a second straight week with a concussion.

The hand-off between Luck and Brissett has been seamless thus far for Frank Reich.

The headsets are working well and Brissett can hear Reich loud and clear.

“No question, Frank (Reich) gives you the free range to talk to him throughout the game,” said Jacoby Brissett. “If I’m telling him I’m not feeling well about this or I want to do this more, he’ll listen. Obviously, we’ll have a dialogue about it, but he’s been pretty good about leaving that range for conversation.”

“‘I like this play. Please call this play.’ ‘Not yet Jacoby (Brissett)… that’s exactly how it is,'” Brissett explained.