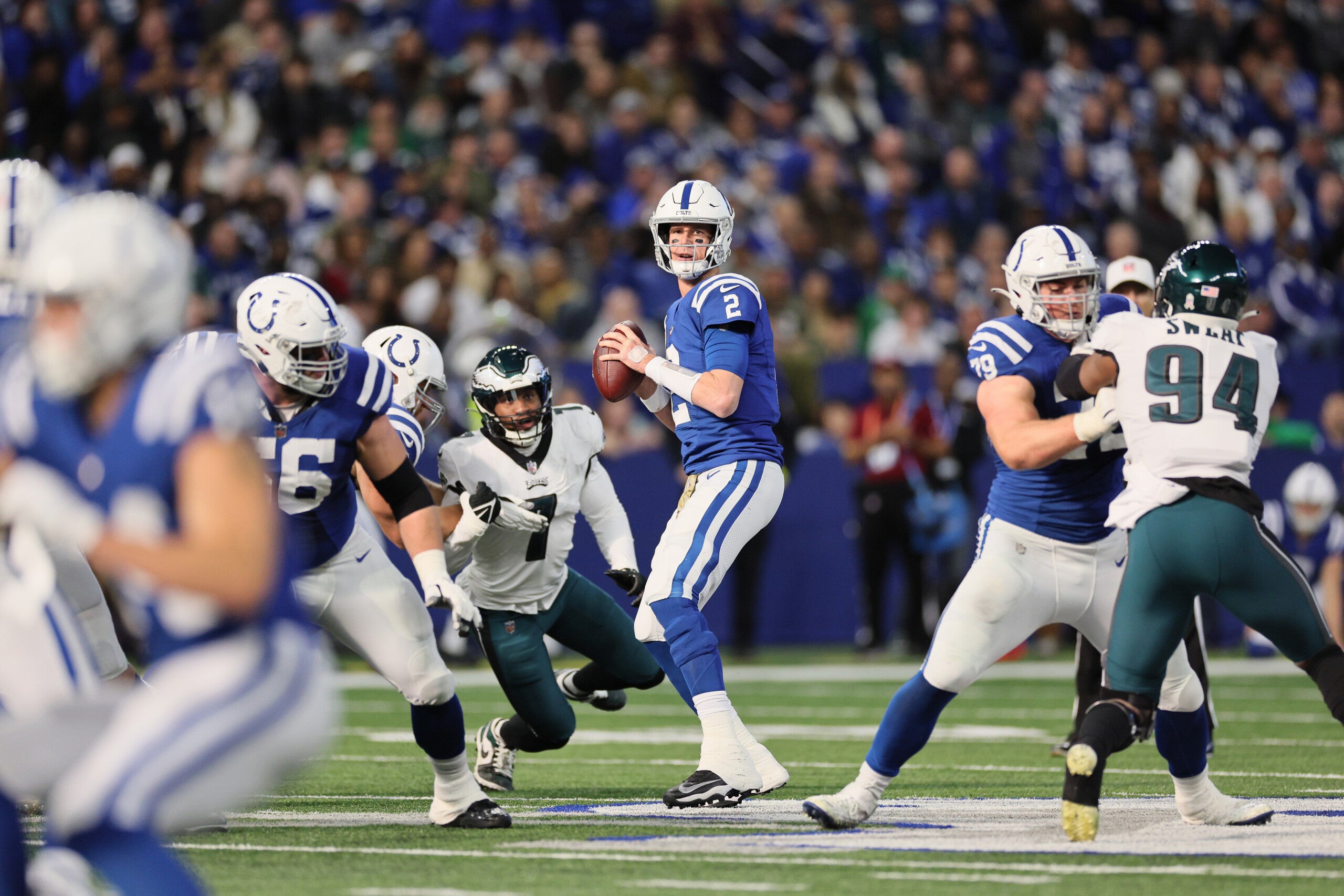 INDIANAPOLIS (AP) — Jalen Hurts ran for an 8-yard touchdown with 1:20 remaining, and the Philadelphia Eagles rallied past the Indianapolis Colts 17-16 on Sunday.

Coming off their first loss of the season, the Eagles (9-1) trailed 13-3 in the fourth quarter. Hurts threw for a touchdown early in the period to get Philly within three.

The third-year quarterback was 18 of 25 with 190 yards through the air and rushed 16 times for 86 yards as the Eagles won their seventh straight road game.

Indianapolis (4-6-1) never trailed until Hurts’ scoring run. Interim coach Jeff Saturday evened his record at 1-1 since taking over for the fired Frank Reich.

Hurts did it all, routinely burning the Colts for big runs. And on third-and-goal from the 8-yard line, he found a seam in the middle and sprinted across the goal line for the decisive score.

Indy had a chance for a game-winning drive, but it stalled before the Colts could get to midfield and they turned it over on downs.

It looked like the Colts would continue their evolution under Saturday when they drove 75 yards on their opening drive and finally scored on Jonathan Taylor’s 1-yard TD. It was Indy’s first touchdown on its first possession since last Dec. 25.

But the Colts could only muster three more field goals by Chase McLaughlin — and his crucial 51-yard attempt that missed to the right, setting up Philadelphia’s first TD. Hurtz hit Quez Watkins for a 22-yard touchdown with 13:31 left in the game.

The Colts made it 16-10 on McLaughlin’s third field goal of the day, a 37-yarder, with 4:37 to play. But a defense that held Philadelphia in check all day — and to fewer than 20 points for the first time in 15 regular-season games — couldn’t get the stop it needed.

Eagles: Miles Sanders had 13 carries for 47 yards. … DeVonta Smith finished with six receptions for 78 yards and A.J. Brown had five catches for 60 yards. … The Eagles sacked Matt Ryan five times including on third-and-9 in the final minute. … Philadelphia has beaten Indy four consecutive times in the series.

Colts: Ryan was 23 of 32 with 213 yards. … Taylor carried 22 times for 84 yards and scored for the second straight week. … Michael Pittman Jr. caught six passes for 75 yards and Parris Campbell had five receptions for 67 yards.