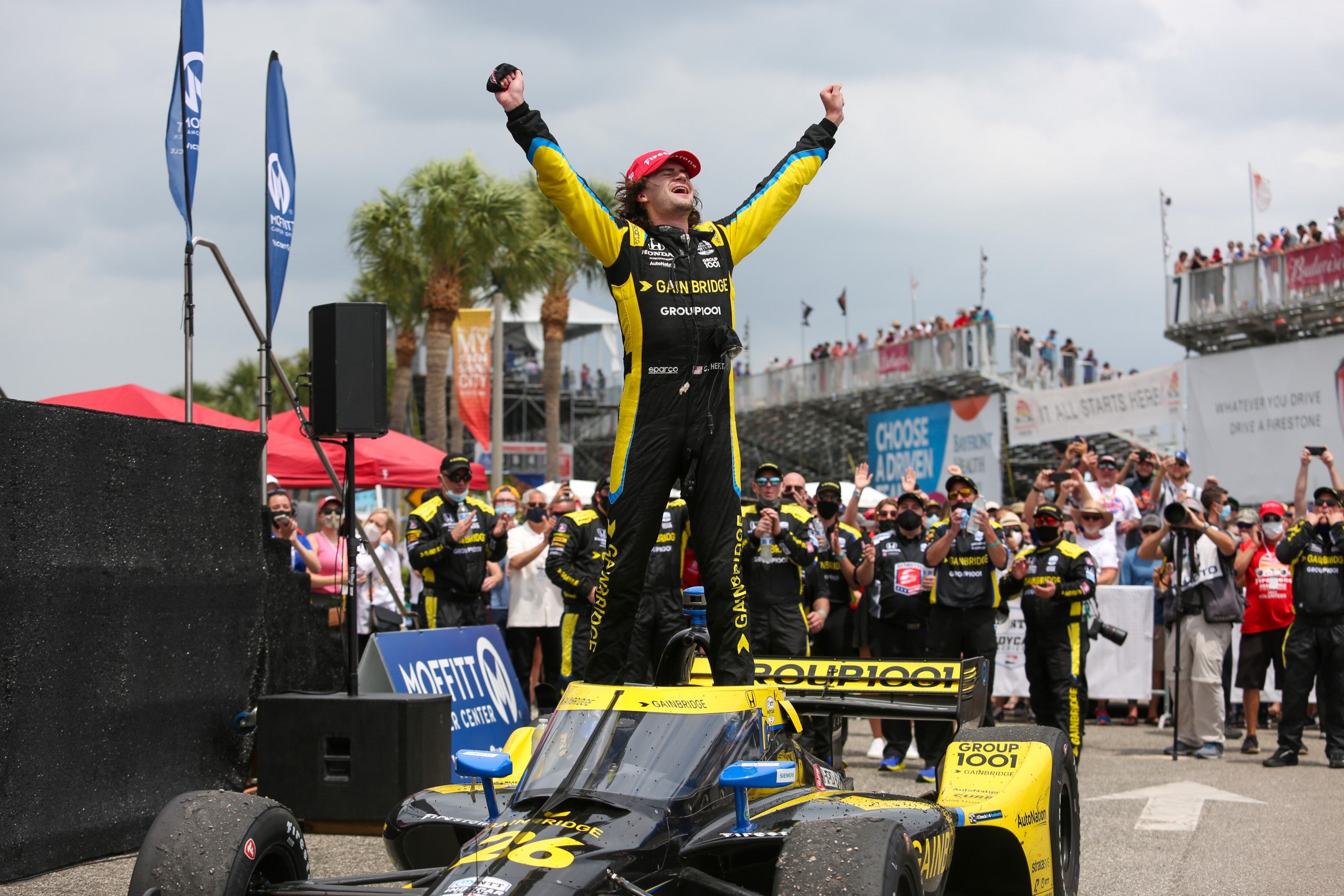 ST. PETERSBURG, Fla. (AP) — Colton Herta followed the sound of his father’s voice around the downtown streets of St. Petersburg, into victory lane and next to him on IndyCar’s win list.

Herta on Sunday scored his fourth IndyCar victory to match the same total his father, Bryan, achieved over his own 12-year career. The son needed just 34 races for his four wins, and at the start of his third full IndyCar season, Colton Herta is already a title contender.

Herta started from the pole and led a race-record 97 of the 100 laps to win his first race with Bryan Herta as his race strategist. Andretti Autosport paired the Hertas for the first time this year, dismissing previous father-son combinations that simply didn’t work in IndyCar.

This one would work, Michael Andretti insisted, because Colton Herta is so calm and so collected, and Bryan Herta had been a master on the radio for both Alexander Rossi and Marco Andretti. So when two cautions created two late restarts for Colton Herta to hold off Josef Newgarden, Bryan Herta was asked if father or son was more nervous about the fate of the race.

“Neither of us,” Bryan Herta said.

The win was the first on a street course for the son, who asked his father for permission to do celebratory burnouts. It was granted, but his dad also reminded his son over the radio “wave to your fans” on the victory lap.

“I tied him for wins today, too, and I just love having him on my radio,” Colton Herta said.

He was exhausted following the drive on a humid day on the 1.8-mile, 14-turn temporary course along the Tampa Bay. Both hands were blistered and he said after climbing from the car that he was winded several times.

But he immediately recognized he’d tied his dad in the win column, and his beaming father acknowledged the kid is for real.

“When he first moved to IndyCar, people asked me if he was better than I was,” Bryan Herta said. “They don’t ask me that anymore.”

Newgarden finished second and was denied a third consecutive victory at St. Petersburg. He was followed by Team Penske teammate Simon Pagenaud.

In last week’s season-opening race at Barber Motorsports Park in Alabama, Newgarden spun on the opening lap in an uncharacteristic mistake that also collected Herta. It knocked both from the race, but Herta climbed from his car and calmly declared he’d bounce back this week in St. Pete.

He’s shown that confidence and maturity since his 2018 rookie season, when he won in his second career start to become the youngest winner in IndyCar history at 18 years old. He turned 21 last month and is now permitted to drink the champagne on the victory podium for the first time in his career.

The victory is a spark for Andretti Autosport, which struggled through 2020 and didn’t score its only win of the season — by Herta — until the 11th event. But Michael Andretti says the team is improved and both Herta and Rossi are title contenders, though it is Herta who has taken the lead.

Rossi finished 21st and was involved in a midrace incident with Graham Rahal in which the two drivers slammed into one another battling for position. Alex Palou, winner of last week’s opener, finished 17th.

Seven-time NASCAR champion Jimmie Johnson finished 22nd out of 24 cars in his second IndyCar race. He brought out two cautions.