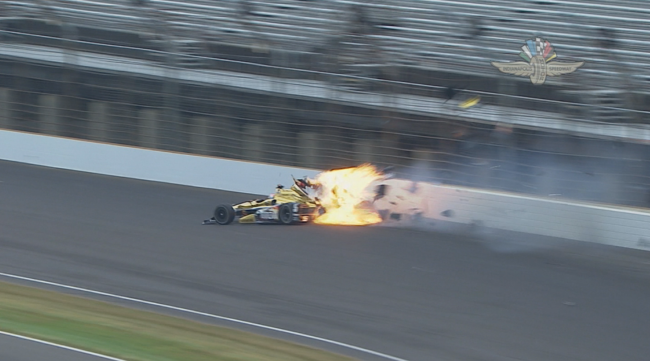 INDIANAPOLIS (WISH) – Every time IndyCars race, the Holmatro safety trucks surround the track. The trucks are at the ready, in case anything happens.

May 18, 2015, the lightning speed and expertise of the crew, very well saved the life of James Hinchcliffe.

“When something like that happens, our fire control person will call yellow, yellow, yellow,” said Mike Yates the Director of Track Safety for Holmatro.

Members of the Hulmatro Safety Crew are ready for anything on race days. Since the 1960s they’ve worked to respond more quickly and efficiently to crashes and to make the sport more safe. They even have their own language that helps them communicate in code for conditions of the track.

“We have codes for driver condition as well,” said Yates.

Yates recalls what he saw the day that Hinchcliffe nearly died.

“Where it’s the closest to the white line down there is where the piece broke on the car, and he did just a little bit of a right hander and then drove straight into right, about where the grandstands ends. That’s when they called the code 05 pretty quick because it was obvious that he was in distress,” said Yates.

It was the first day of Indy 500 practice for 2015 and seconds after Hinchcliffe hit the wall out of turn three the crew knew they were working against the clock.

“He said himself that he felt like he was trapped but he was really hard to move,” said Yates. “We opened the car up and it got to a point, we heard the car crack a little bit, we stopped, and we tried to get him out and it still would not budge. At that point I noticed a lot of bleeding on his left hip.”

Yates said “They weren’t sure where the bleeding was coming from because the suspension went under his seat, so you couldn’t see it at all. There was no visual.”

It was there between his legs that they found a pool of blood and the team knew they had a big problem.

“When I told him that we were going to have to get him out of the car and once we started, he gave me a nod like he understood,” said Yates.

Yates remembers him saying three words, but he couldn’t repeat them.

“We started pulling him out and it was heavy, but when we got him up to the edge of the car onto our backboard. I heard a thump in the cockpit of the car like somebody had dropped a radio,” said Yates.

After he was pulled from the car they could see what was a part of the suspension. Hinchcliffe was then rushed to IU Health Methodist with surgeon Dr. Pullian.

“He got in the ambulance with us as we were leaving the Speedway, so that really saved us a lot of time. He watched what we were doing, he could see what Hinch’s injuries were and I think it gave him time to develop a plan,” Yates said.

When they saw what the injuries were they knew they were in a little bit of trouble. Yates said there was a lot of blood.

“You didn’t want to make it worse, but you had to try to make it better. We packed a lot of packing in the holes, and kind of put a compression diaper with a sheet around his belly and tried to pull it as tightly as we could to try, just to slow the bleeding down as best we could,” Yates said.

Yates and Dr. Pohlman at the time weren’t really sure whether or not he was going to survive. Pohlman said at one time they lost Hinch’s pulse on the way to the ER, but by the time they got to the hospital they were getting a little less responsive.

“You start thinking about it, and these guys are friends of ours. We travel with them all the time, shared Yates. There’s a bond there that makes it kind of personal when you’re at the car there.”

Yates said Hinch’s accident was like the perfect storm because for the suspension part to take the path it took it lined up perfectly. An inch could have cost Hinch his life.

There is some good that comes out of this. Yates said it will make them better in other situations like this. He said that IMS has absolutely the best system developed.

“It’s amazing now, I mean, a year later and the guy’s probably in better shape now, beefier now than he was back then. He’s still from Canada though,” laughed Yates.