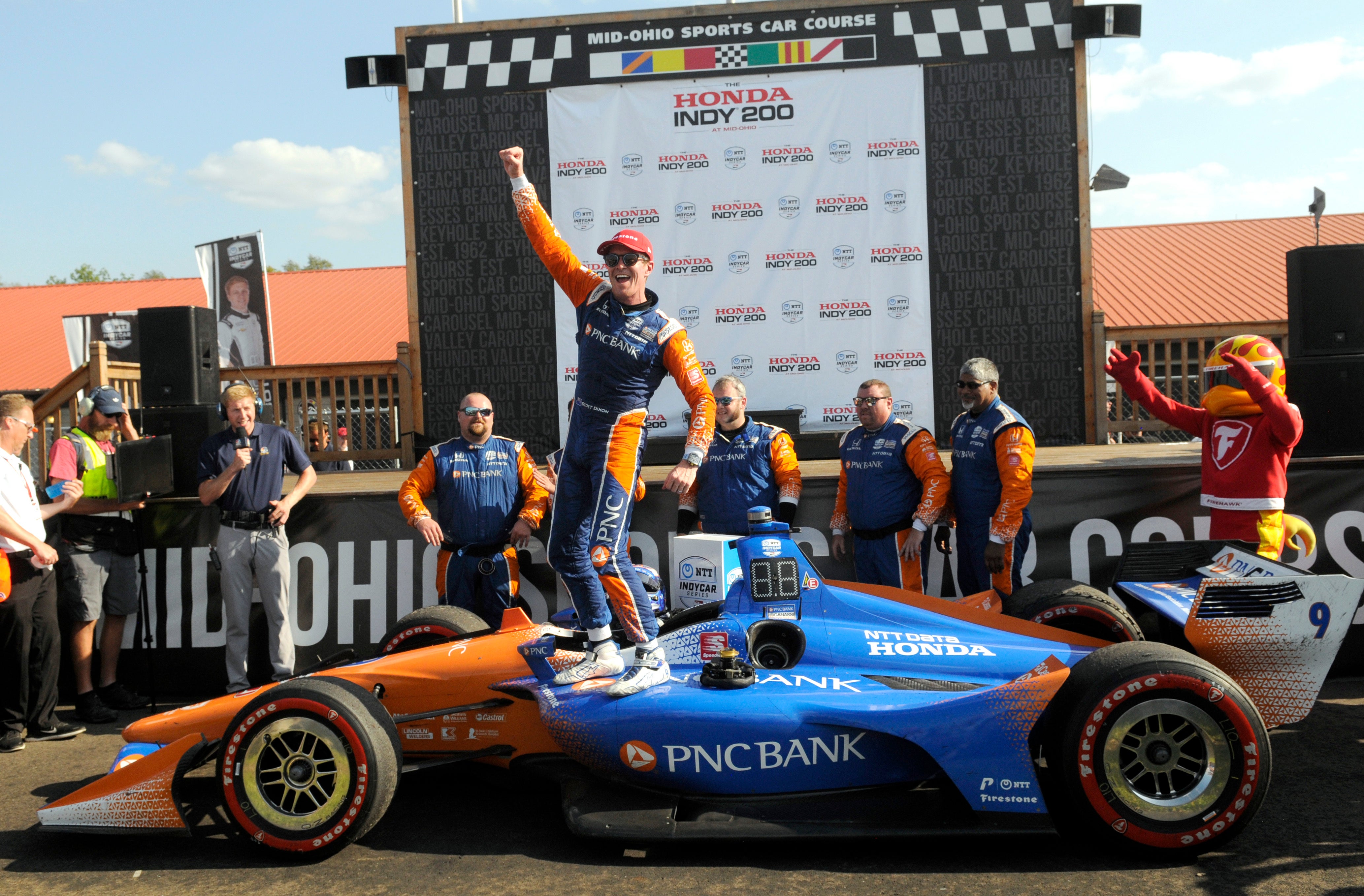 Scott Dixon held off rookie teammate Felix Rosenqvist by 0.0934 seconds in the Honda Indy 200 to put himself back in contention to defend his IndyCar season championship.

It was the closest finish at Mid-Ohio and the third-closest on a road course in IndyCar history. The Chip Ganassi Racing driver from New Zealand is third on the career victory list with 46.

“I would have preferred winning by 10 seconds instead of banging wheels for a few laps,” Dixon said. “It feels really good for the sheer fact we haven’t won here since 2014.”

The final lap on the 13-turn, 2.258-mile road course featured an epic battle with Rosenqvist — and a failed maneuver by points leader Josef Newgarden of Team Penske. Newgarden tried to get around third-place Ryan Hunter-Reay in the keyhole part of the course, but ended up bumping Hunter-Reay and spinning off the track. Hunter-Reay of Andretti Autosport was third, 1.16 seconds behind Dixon.

Newgarden blew a chance to add to his points lead over Alexander Rossi. Rossi struggled to fifth, but still reduced Newgarden’s advantage to 16 points.

Newgarden, who finished 14th, blamed himself for the incident.

“I was trying to get on the podium,” he said. “It was my fault to force the issue.”

Penske’s Simon Pagenaud, who was sixth, is 57 points off the lead. Dixon is 62 back. There are four races left.

“It’s a big shift,” Dixon said. “These are the kind of weekends you need.”

The race to the checkered flag included lapped cars that put some space between Dixon and Rosenqvist, who has not won on the Indy circuit.

Team owner Chip Ganassi gave the go-ahead for the two to race to the finish. Rosenqvist and Dixon bumped but not enough to cause an accident that would have prevented a 1-2 team finish.

“If it was someone else, I’d go a bit harder,” Rosenqvist said. “Being Scott, you know he’s going to be fair. … Chip says the first rule is don’t take out your teammate.”

Dixon finished on the red alternate tires that run faster but are less durable and he was losing seconds off his lead in the closing laps.

“We were closing on them but we came up a little short,” Hunter-Reay said.

Dixon sensed his advantage was slipping away.

Rosenqvist got a closeup look at why Dixon is third in Indy victories.

“He was on poor tires and low on fuel and came out on top,” Rosenqvist said. “If we had another lap, we might have passed him.”

Pagenaud has finished first, fourth and fourth in his past three races and has quietly crept into contention to win his second championship (2016).

Newgarden certainly has made things interesting with his ill-advised pass attempt. “I’m not really sure what Josef was thinking doing that,” Hunter-Reay said.

Those with Ohio connections did not fare well. Graham Rahal, the 2016 winner from New Albany, was ninth; Jack Harvey of the Columbus-based Meyer Shank Racing was 10th and Stockdale’s Zach Veach finished 20th of 23 drivers.

Dixon, fourth in points, knows he will become a father for the third time in December. He also knows offseason surgery on his ailing left elbow is in the offing. “It’s not good. It’s still an issue,” he said.

Rossi will be the defending champion again at the Pocono Raceway 500-mile race 500 on Aug. 19. Two of his seven wins have been on ovals, including the 2016 Indianapolis 500 as a rookie. Newgarden finished second in 2015 and ’17.