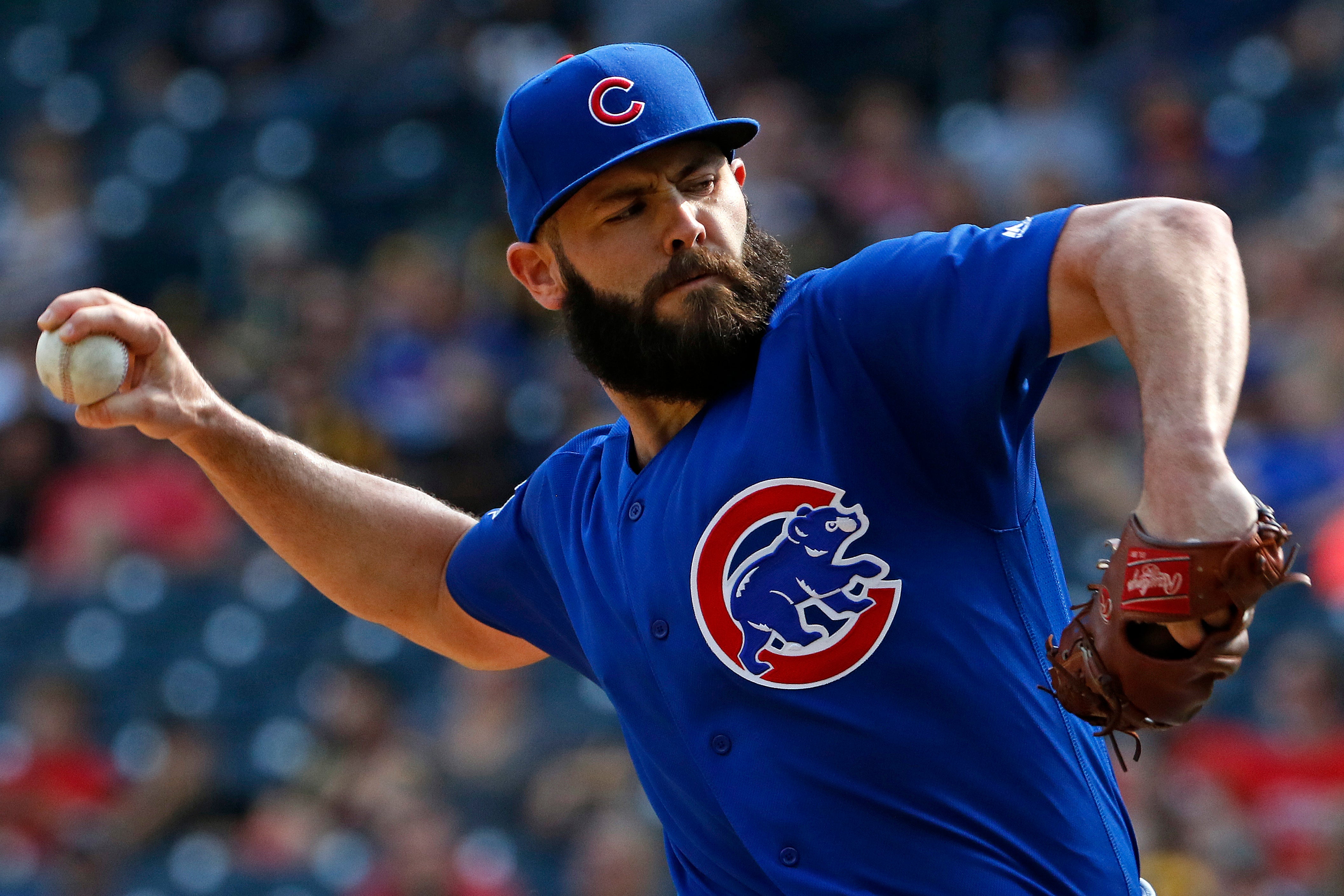 PITTSBURGH (AP) – Jake Arrieta let the ball go and his right leg seized up in pain. And all of a sudden, Arrieta’s sizzling second half came to an abrupt halt.

Just, the Chicago Cubs ace hopes, a temporary one.

Arrieta gave up home runs to Pittsburgh rookies Josh Bell and Max Moroff before exiting in the third inning with a cramp in his right hamstring and the Pirates piled on late in a 12-0 victory over Chicago on Monday.

Arrieta (14-9) was already trailing 3-0 with one out in the third when his first pitch to Bell sailed up and in. The 2015 Cy Young Award winner clutched his leg in obvious pain. He attempted to stretch it out during a visit by manager Joe Maddon and Chicago’s trainers but a test pitch ended with Arrieta unable to let go of the ball and in obvious pain.

“As I started my drive to the plate, it really grabbed pretty good and I tried to throw a warm up pitch and it just wasn’t going to happen,” Arrieta said. “It’s unfortunate but I think it’s going to be OK.”

Arrieta believes he will be able to make his next scheduled start on Saturday against Milwaukee.

“I don’t forsee it being a serious deal,” Arrieta said.

Arrieta began the day in the middle of a blazing second half reminiscent of the tear he put together in 2015 on his way to the Cy Young, coming in 6-1 with a1.59 ERA since the All-Star break to help the World Series champions break out of a funk and move atop the NL Central. Despite the loss, the Cubs maintained a 3½-game lead over the Brewers, who lost to Cincinnati.

Long before the pain arrived, Arrieta’s usual crispness was missing and Bell pounced.

The 25-year-old first baseman is one of the bright spots on an uneven season for Pittsburgh. Bell’s two-run homer to the seats in right field off Arrieta in the first inning gave him 24 on the season, breaking the National League record for most home runs by a rookie switch hitter set by former Atlanta star Chipper Jones in 1995. Bell never hit more than 13 home runs in the minors.

Moroff entered hitting .160 on the season but went 3 for 5 with his third home run and four RBIs. Chad Kuhl (7-10) allowed four hits in seven innings for the Pirates, striking out a career-high eight. Pittsburgh has won three straight following a four-game losing streak.STICKING AROUND

Pirates manager Clint Hurdle turned 60 earlier this season but has no plans on leaving.

The Pittsburgh Post-Gazette reported Hurdle and the team have agreed to a four-year extension through the 2021 season. The team had no official comment. Hurdle indicated he wanted to wait for the club to “get everything they need in place” before making a formal announcement.

“I’ve made it clear from the beginning that a contract would work out when it was meant to work out,” Hurdle said after improving to 575-534 with the Pirates. “I love working here. I love working in this organization.”LEANING ON LEONYS

With things well out of hand in the eighth, the Cubs turned to outfielder Leonys Martin to finish up. Martin, acquired in a trade with Seattle last week, gave up a two-run home run to David Freese while also registering two outs. Maddon didn’t want to overtax his bullpen and Martin, who hit 91 on the radar gun, was up for the challenge.

“He said he’s been trying to do that for a bit but nobody ever put him in,” Maddon said. “He got his opportunity today on national TV.”TRAINER’S ROOM

Cubs: SS Javy Baez was given the day off to give his sore left thumb a rest. Baez jammed the thumb while sliding into second base against Atlanta on Sunday. Baez also experienced blurred vision when his face slammed into Braves second baseman Ozzie Albies on the play, though Baez’s vision had cleared by Monday. … C Wilson Contreras (hamstring), out since Aug. 11, will attempt at minor league rehab assignment “the moment he’s ready to roll,” according to Maddon.ON THE MOVE

The Pirates picked up left-handed reliever Jack Leathersich off waivers from the Cubs and sent him to Triple-A Indianapolis. The 27-year-old Leathersich appeared in one game for Chicago this season. He made 17 appearances for the New York Mets in 2015, posting a 2.31 ERA.UP NEXT

Cubs: Kyle Hendricks (6-4, 3.32 ERA) goes for his third consecutive win on Tuesday. Hendricks, the NL ERA champion in 2016, hasn’t allowed more than three runs in his eight starts since the All-Star break.

Pirates: Steven Brault (0-0, 5.93) will make his first start of the season. Brault is filling in for Ivan Nova. The Pirates are giving Nova a breather. Nova is 2-6 with a 6.38 ERA since the break.