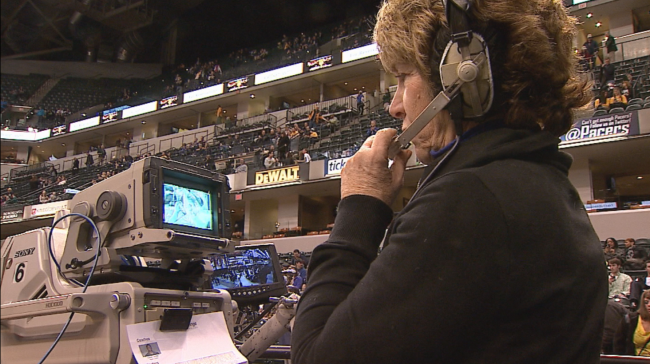 INDIANAPOLIS (WISH) – In 1973, female sports reporters and photographers were a foreign concept. Indianapolis photographer Beth Efroymson helped change all that as one of the early female photographers to shoot sporting events anywhere in the country.

“There were no women. It didn’t matter where you were, what department. Women weren’t in television,” said Efroymson of her early years. “The biggest shock was always walking into an office, a sporting event with my equipment. And the first thing they would say to the men would be, ‘Why aren’t you carrying that?’ The second thing would be, ‘What are you doing here?’ And if it was a sporting event, it would be, ‘Are you sure you know what you’re doing?’”

After begging anyone and everyone to teach her how to use a camera in 1973, she spent over a decade in local TV in Indianapolis. Then, she caught on with the networks including ESPN, becoming one of even fewer women to shoot the games on a handheld camera. She never let the stares or whispers keep her from doing what she wanted to do.

“I think at some point you just keep trying to rise above it, and saying, ‘Ha, I’m going to prove it to you,’” Efroymson said.

Her journey in television has taken her all over the world. She’s shot four Olympics – Athens, Sydney, Sevilla and Torino – two Super Bowls and just about every other sport you can imagine. But, she’s still turning heads.

“Even now at a Colts game this fall, I had a woman come up to me and say, ‘Oh wow, I’ve never seen a woman do this before.’” Efroymson said.

Despite shooting events for the past 40 years, she has no plans on giving it up anytime soon. She said she’ll stop working when they stop calling.