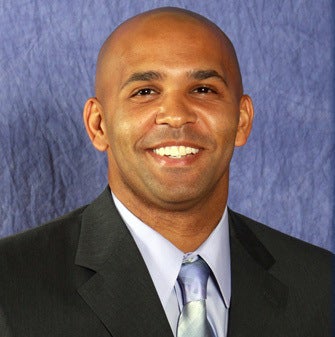 The Lafayette product spent the last six years as an assistant at the University of Evansville with former Hoosier Marty Simmons and the Purple Aces.

Prior to his time with the Aces, Harris was on the staff of DePauw, Earlham, and at Manchester College, his alma mater.

Harris inherits a program that finished 16-15 for Todd Lickliter, and finished 7th in the Crossroads League with a 7-11 mark.

Harris says his first head coaching experience coming at Marian was no accident.

“I was a camper when I was here when I was young with Coach Grimes,” Harris said at his opening news conference. “This isn’t just a place that popped up in the jobs board. This is a place that I’ve thought of in the past. I’ve been here a lot, I’ve followed them in their successes, and it’s a great opportunity. The community of Marian and Indianapolis makes it such a positive job, it’s something I couldn’t turn down.”