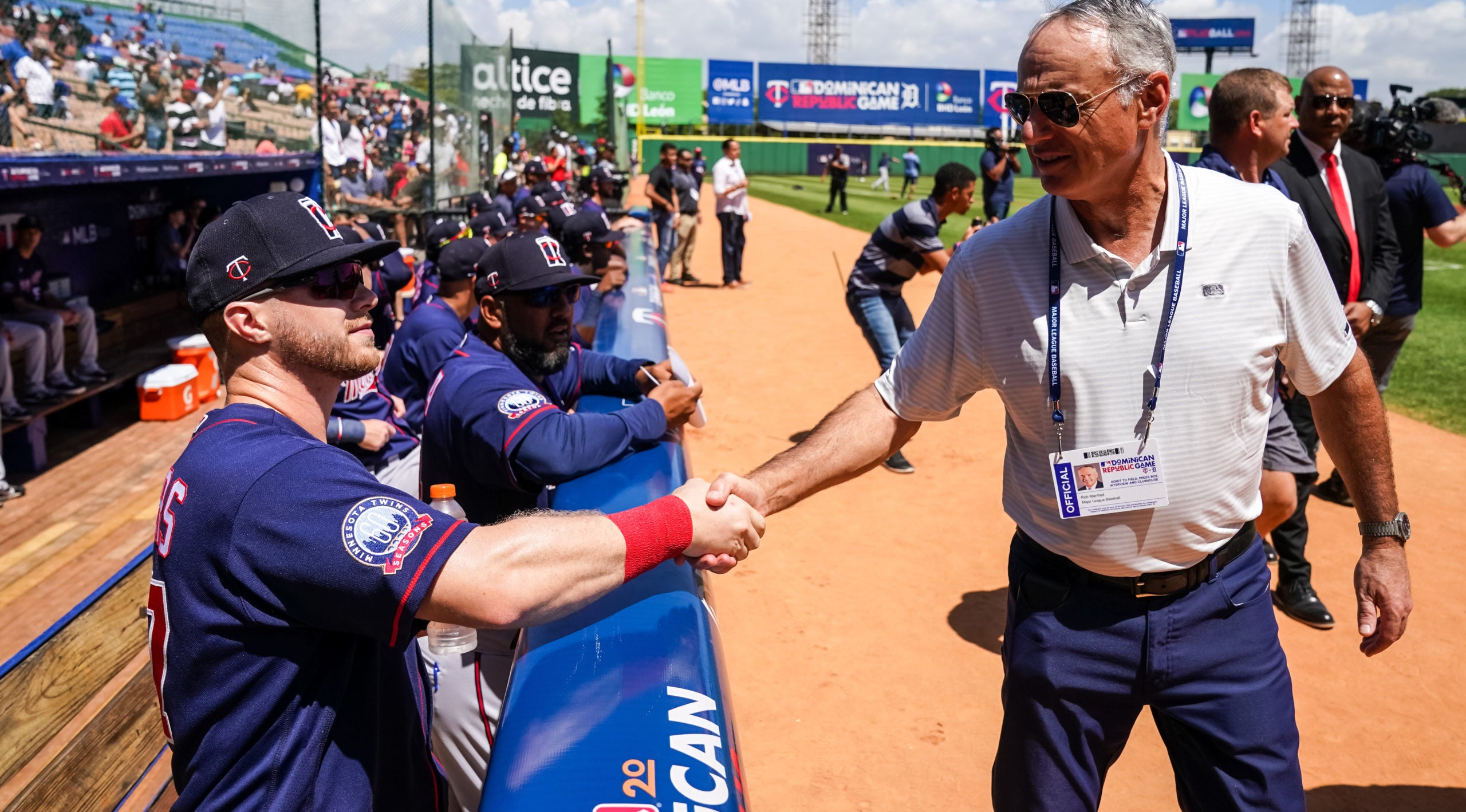 NEW YORK (AP) — Major League Baseball pushed back opening day until mid-May at the earliest on Monday because of the new coronavirus after the federal government recommended restricting events of more than 50 people for the next eight weeks.

Baseball Commissioner Rob Manfred made the announcement following a conference call with executives of the 30 teams.

“The clubs remain committed to playing as many games as possible when the season begins,” the commissioner’s office said in a statement.

The Centers for Disease Control and Prevention recommended Sunday that gatherings of 50 people or more be canceled or postponed across the country for the next eight weeks.

“The opening of the 2020 regular season will be pushed back in accordance with that guidance,” Manfred said.

No telling at this point when games will start. The All-Star Game at Dodger Stadium in Los Angeles on July 14 could be in jeopardy.

“We’re not going to announce an alternate opening day at this point. We’re going to have to see how things develop,” Manfred told the St. Louis Post-Dispatch at Cardinals camp in Jupiter, Florida. He didn’t want to speculate about the possibility of playing in empty stadiums, saying part of that decision would depend on timing.

MLB called off the rest of the spring training schedule on Thursday and said opening day, which had been scheduled for March 26, was postponed for at least two weeks. Teams and players agree that two to four weeks of additional spring training will be needed before the regular season begins.

“I’m just treating this as January of the winter time,” Arizona catcher Stephen Vogt said in a text to The Associated Press. “I am working out with the anticipation of baseball activities ramping up over the next month. But my mentality is back to preparing for the season.”

Under an agreement last week, between MLB and the players’ association, players are allowed to decide whether to stay at spring training or go home, but some teams have ignored that deal and told players to leave.

“There should be no organized activities in the camps,” Manfred told the Post-Dispatch. “We did agree with the MLBPA that spring training sites would remain open, but the thought there is with a skeleton crew, really to give players some place to use a gym, as opposed to being forced out into a public gym and the like. And we’re really encouraging players to make a decision as to where they want to be over an extended period of time and get to that location as soon as possible.”

The players’ association sent an email to agents on Monday saying that for players who went home or to their team’s regular-season city it would pay $1,100 allowances through April 9 to players on 40-man rosters as of March 13. That amount also would go to players with minor league contracts at big league spring training who were on 40-man rosters at the end of last season.

The union is negotiating with MLB over resetting the dates for players with opt-out clauses in their deals, and the sides are likely to agree on a roster freeze. They are discussing the possibility of payments to major league players who have not reached the point of big-money deals to make up for paychecks they won’t be getting in April and May.

This year marked the earliest opening day other than for international games. As it stood, Game 7 of the World Series would have been Oct. 28, and teams and players could push the postseason into November.

Any change to the 162-game schedule would necessitate bargaining over an array of issues, including when and how much players get paid and how much major league service they are credited for. Service time determines eligibility for free agency and salary arbitration.

Clubs also were told to call MLB if they wanted assistance with credit lines, a person familiar with Manfred’s call said, speaking on condition of anonymity because that detail was not announced.

MLB had not had a mass postponement of openers since 1995, when the season was shortened from 162 games to 144 following a 7 1/2-month players’ strike that also wiped out the 1994 World Series. Opening day was pushed back from April 2 to April 26 and player salaries were reduced by 11.1% because the games were lost due to a strike.

After a 32-day spring training lockout in 1990 caused opening day to be delayed a week until April 9, the season was extended by three days to allow each team a full 162-game schedule.

The 1918 season was cut short because of World War I. Provost Marshal Gen. Enoch Crowder announced a regulation on May 23 that men not involved in useful occupations appear before the draft board. The War Department initially did not rule baseball was non-essential under the “work or fight” order but Secretary of War Newton D. Baker announced on July 26 that baseball had to comply by Sept. 1. After some negotiation, the regular season ended Sept. 2 with teams playing 123-131 games, and the Boston Red Sox beat the Chicago Cubs in a World Series played from Sept. 5-11.

Also Monday, MLB and the union announced a joint donation of $1 million to Feeding America and Meals on Wheels America, aimed at fighting hunger resulted from school closures and quarantines.