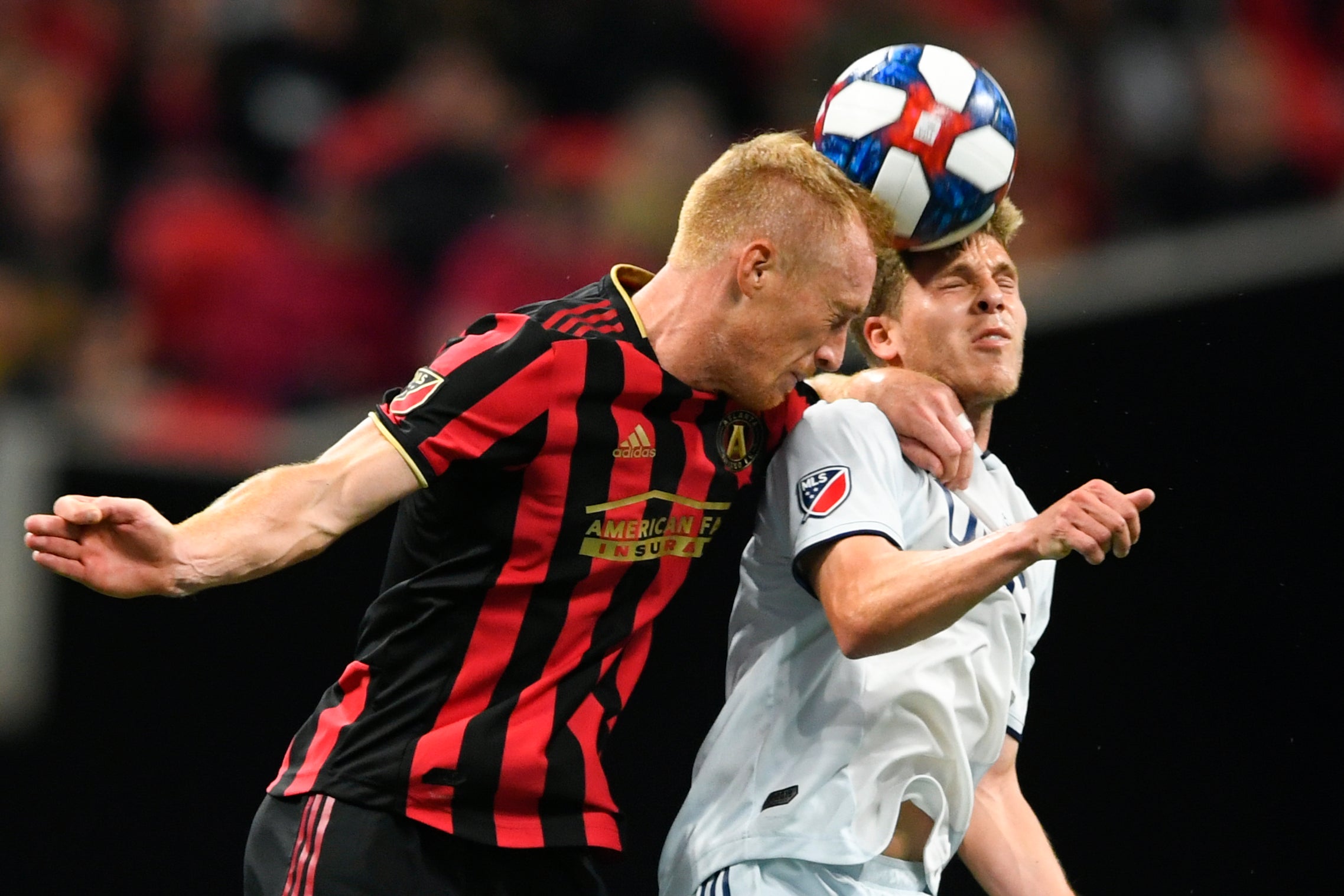 FILE - In this Oct. 19, 2019, file photo, Atlanta United defender Jeff Larentowicz, left, and New England Revolution midfielder Scott Caldwell battle for a header during round one of an MLS Cup playoff soccer game in Atlanta. Atlanta United veteran defender Jeff Larentowicz, who serves as an executive board member for the players union, said Thursday, June 4, 2020, he has safety concerns about an agreement announced Wednesday for a MLS tournament in Orlando in July. He is worried about the ongoing coronavirus pandemic and said "We play a contact sport and the virus is a serious thing that puts us all in danger." (AP Photo/John Amis, File)
by: ANNE M. PETERSON, AP Sports Writer
Posted: Jun 10, 2020 / 04:10 PM EST / Updated: Jun 10, 2020 / 04:19 PM EST

(AP) — Major League Soccer is resuming its season amid the coronavirus pandemic on July 8 with a World Cup-style tournament in Florida that won’t include fans in the stands.

The league’s 26 teams will be divided into six groups for the opening round of the tournament at ESPN’s Wide World of Sports complex at Walt Disney World.

Sixteen teams will advance to the knockout round, with the winner earning a spot in the 2021 CONCACAF Champions League. The group matches will count toward the regular season, the league said.

Teams had played just two games to start the season when the league suspended play March 12 because of the COVID-19 pandemic.

While in Florida, players will be sequestered in a resort and be subject to a rigorous testing protocol. Each team will have three group matches, played over 16 consecutive days with multiple games a day. Games will be played in the morning and the evening to avoid the heat.

Players will be tested for COVID-19 before they leave for Orlando and when they arrive, as well as during the competition. Staffs will also be tested.

Commissioner Don Garber noted on a conference call with reporters Wednesday that it will be impossible to test everyone who might come in contact with players, like hotel staffs.

“We do need to manage social distancing. We will have that in place. We will need to manage facemasks and other PPE. For anybody that is involved in this project, we will have sanitizing and other things like temperature checks and the like for those that are involved in hotels and involved in housekeeping and the like. But those are not our employees,” Garber said. “We’re confident, having gone through this protocol, both with our own infectious disease doctor but also in sharing that with the MLSPA’s infectious disease adviser, and also with the state authorities.”

Garber could not say whether a certain number of positive tests would stop the tournament.

“That’s certainly a question because there’s obviously going to be a lot of hotel staff that are coming and going. The parks are going to be open. You know, somebody can easily be asymptomatic, not realize they have it, and ultimately be what some officials have described as being called the superspreader,” Guzan said. “We don’t know. And so, I guess we’re all taking this leap of faith.”

He also noted that it was hurricane season in Florida and it was unclear whether there were contingency plans for the weather.

The announcement of the tournament comes a week after the league and its players reached an agreement on a contract that runs through 2025, clearing the way for the event.

The prize pool for the MLS Is Back Tournament is $1.1 million, the league said. The title match will be played Aug. 11.

Sporting Kansas City coach Peter Vermes said the tournament was the best option for the league in the short term and players are looking forward to it.

“The whole idea is we have to get ready for them, do the best we can to prepare ourselves, we have to win them,” Vermes said “At the same time, it’s not something we’ve dealt with before, we’re going to be part of history in regards to this, so let’s take advantage of it if we can.”

Following the tournament, teams will likely resume the season in their home markets. It was unclear whether those games would be played with fans in the stadiums.

Teams can begin arriving in Florida for training on June 24. Those that have already been training must arrive no later than seven days before their first match.

The draw for the group stage is set for Thursday. As hosts, Orlando City will be the top seed in Group A.

Nashville will move to the Eastern Conference for the tournament and the rest of the season.

“I mean, obviously, it makes sense for us to be in the Eastern Conference for a variety of reasons. Other than the teams in Florida or Atlanta, we’re the farthest southeast in MLS. So it just makes a lot of sense to do that,” Nashville GM Mike Jacobs said. “The hope is whether it’s rivalries that develop naturally because of proximity I think it’s a good thing for us in general and time will tell where the league determines where we play in the future.”