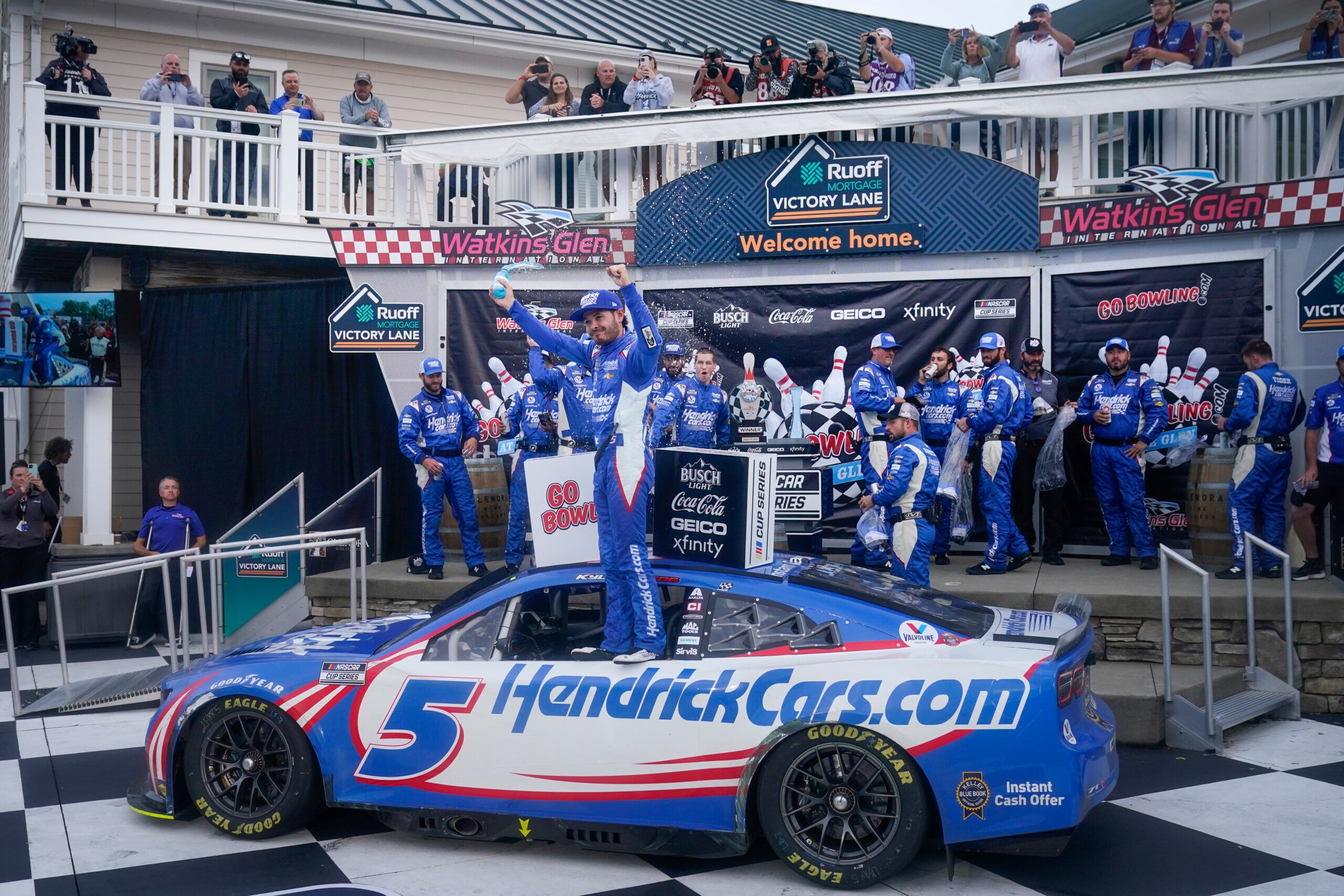 WATKINS GLEN, N.Y. (AP) — Kyle Larson was looking for a jolt of momentum. He got it for the second straight time at Watkins Glen International.

The reigning NASCAR Cup champion, winless since his only victory of the season at Auto Club Speedway in February, beat Hendrick Motorsports teammate Chase Elliott on a restart with five laps to go and won the weather-delayed NASCAR Cup race Sunday.

Elliott was seeking his eighth career road course victory and had control of the race late, but a caution gave Larson a chance and he took advantage, moving Elliott to the left coming out of the first turn, then pulling away for a weekend Xfinity-Cup sweep. It was the 11th straight road course win for Chevrolet.

“I did what I felt I needed to do to get the win. I knew that was my only opportunity to get by him, I’m not proud of it,” said Larson, who won 10 races last season “The restarts kept me in it. It’s good to get another win. Hopefully, it will build some momentum.”

Elliott declined to criticize his teammate when interviewed postrace, but the disappointment was palpable.

“Just a huge congratulations to Kyle and everybody on the 5 team. He did a great job,” said Elliott, who wrapped up the regular-season title. “Seriously, they deserve it.”

The race began on rain tires with a single-file start, the only one of the day, and pole-sitter Elliott was passed early by Michael McDowell, who started third. But strategy played out as the race wore on with Elliott, Larson, and McDowell, all on a two-stop strategy around the 2.45-mile natural terrain layout, holding the upper hand.

Elliott regained the lead with 18 laps to go in the 90-lap race and when the final pit stops were complete he was just over 2 seconds ahead of his teammate. McDowell was more than 10 seconds behind, but a spin by Joey Hand in the first turn brought out a caution and bunched up the field for a restart with eight laps to go.

Elliott picked the outside lane for the restart and held off Larson when the green flag waved, quickly building a half-second lead. But a spin by Loris Hezemans brought out the caution that changed the outcome.

Larson also held off Allmendinger to win the Xfinity race on Saturday at The Glen, taking advantage when teammate William Byron and Ty Gibbs spun out vying for the lead with under five laps to go.

“It’s almost like we were in the same situation as yesterday,” Allmendinger said. “He (Larson) doesn’t really make any mistakes.”

Early in the second stage, Logano passed Todd Gilliland for the lead and Kyle Busch moved in behind him, but as the laps in the stage began to dwindle Elliott was lurking in fourth, backing off near the end of the segment to save fuel. Logano held off Busch for his fourth stage win of the season.

Lightning strikes and rain delayed the start two hours. It was the first time the Next Gen car raced in wet conditions on the grooved tires and Chase Briscoe took advantage. As the track began to dry he was one of the first drivers to pit to put on the faster slicks and the strategy worked as he held on to win the opening 20-lap stage, his fourth stage win of the season.

Fifteen drivers are locked into 16-driver field for the playoffs, with Ryan Blaney and Martin Truex Jr. still battling for points. They entered the race separated by 26 and started side-by-side on Row 13. Truex picked up only one point — finishing one spot ahead of his rival.

Kevin Harvick entered the day fresh off consecutive wins at Michigan and Richmond, but he qualfiied outside the top 20 and never was a factor, finishing 12th.

Former Formula One champ Kimi Raikkonen drove the No. 91 Chevrolet for TrackHouse Racing in his Cup debut. Raikkonen, who qualifed 27th, had veteran crew chief Darian Grubb atop the pit box for guidance. The Finn made it into the top 10 in the second stage but was taken out in the final stage at about the midpont of the the race when he was slammed hard on the right side going through the bus stop, ending his day.

“I had a good line there. Unfortunately, I had no time to react,” Raikkonen said. “That’s how it goes.”

He was one of the record seven drivers from foreign countries competing in a series race and came out of retirement to compete for TrackHouse owner Justin Marks, whose goal is to expand the NASCAR’s international reach by fielding a Cup entry for international racers.