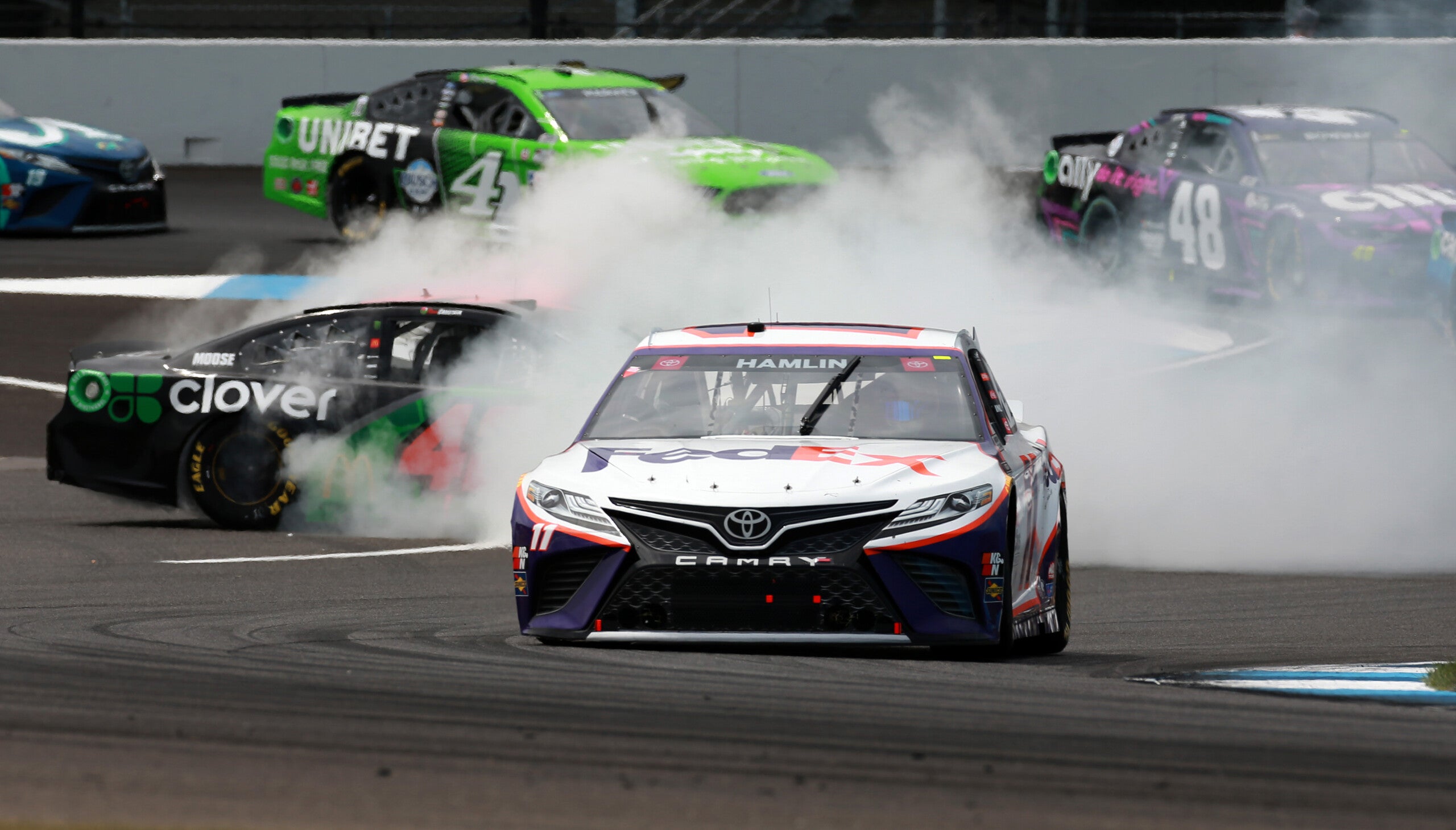 INDIANAPOLIS (AP) — One by one, drivers sped across the deteriorating curbing in the fifth and sixth turns late in the Brickyard 200. One by one, they veered off course.

When the NASCAR Cup Series race restarted after track workers removed the curbing, seven more cars had similar results in the same section of the Indianapolis road course Sunday.

It looked like a demolition derby and race organizers have plenty to reconsider before next year’s race.

“Obviously, we had our problems today,” NASCAR vice president of competition Scott Miller said. “We’ll take a lot of learnings away and come back and put on a better event, obviously avoiding the problems we had today. But I think that we saw some exciting action out there and I think that the course itself puts on a really good show.”

Nine of the 11 cars that didn’t finish were involved in crashes. Many of those running at the end looked like they had been involved in a rough-and-tumble short track or dirt track race rather than a road course.

As a result, most Cup teams will spend this week scrambling to repair and rebuild their cars after a second straight road race. They return to an oval Sunday at Michigan, and for some it can’t come soon enough.

Organizers will likely investigate whether the wear and tear of three days of practice, qualifying and racing on a rare crossover weekend with the IndyCar, NASCAR Xfinity and Cup series played any role in the chaotic finish.

“The curbing is the same style we’ve had since we built it. It’s been replaced, repaired,” Indianapolis Motor Speedway President Doug Boles said. “We’ve not ever really had an issue with those curbs. We looked at that section every session, looked at it every night, every morning there was no indication there was ever anything wrong with it, so it’s a little bit of a surprise to us.”

Drivers were surprised, too.

William Byron, the pole winner and the first to crash, prepared for the first Brickyard on the 14-turn, 2.4-mile course by working on a simulator with IndyCar driver Rinus VeeKay. And yet, Bryon said he’d never experienced anything like it.

Others went public with their complaints.

“I’m missing the oval already,” playoff contender Austin Dillon said after being knocked out in the second melee.

“When you hit them wrong, you pay the price,” he said of the chicanes. “Unfortunately, it was a huge price and we don’t need that. We don’t need to be tearing up cars like that. But at the same time, we have to drive over it the right way. I thought the race track had the right limitations. Unfortunately, the curbing was just starting to come up.”

The wild finish overshadowed what had been a relatively safe, intriguing race. Only 11 of the first 78 laps were run under yellow — two coming at the end of the first two stages and two for debris on the track.

When the curbing came loose, things changed quickly. Series officials debated whether to call the race early but track workers managed to detach the curb. Then the question was whether a second chicane should be removed. NASCAR opted to keep it in.

“As we worked through putting it together for the Xfinity race last year, there was a big ask from the drivers to have something back there because that section was way too fast,” Miller said. “That was not something we were going to sign up for.”

Then just moments after the restart, the wrecking happened again in the same section bringing out a second red flag.

Still, there was a big crowd this weekend along with the intense racing Boles and Miller say they’d prefer keeping the Cup cars on the road course in 2022 — if they can solve Sunday’s problems.

“I think we made the right decision for right now and I think we want to have it back on the road course next year, so we’ll see where we go,” Boles said. “I don’t think it has any impact.”

Miller added: “I don’t either.”