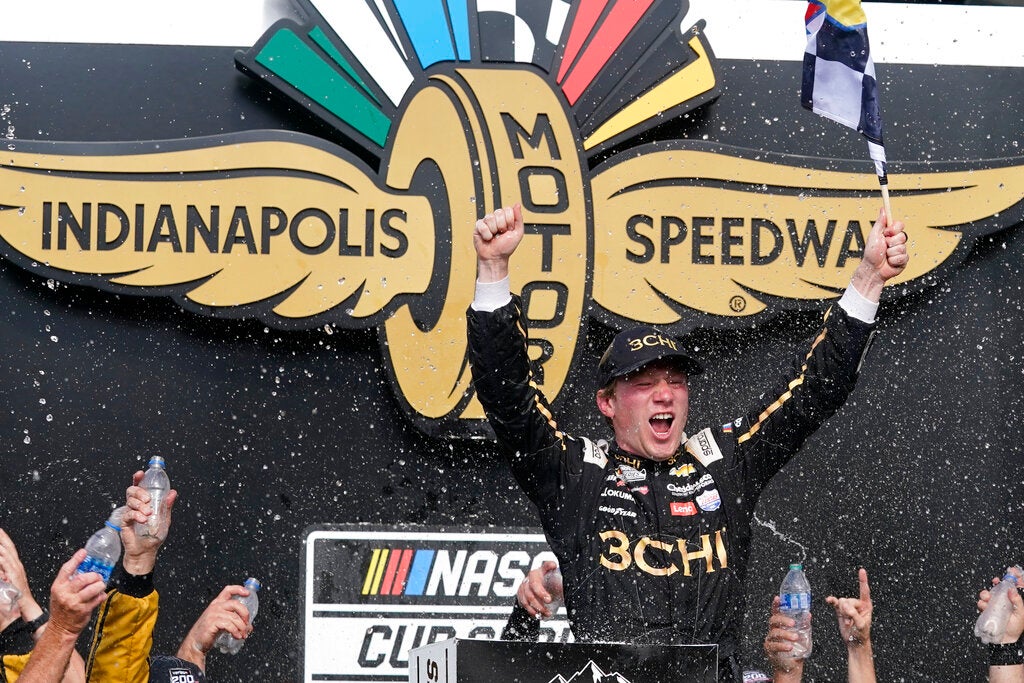 Now he’s got a victory at Indianapolis Motor Speedway.

Reddick closed the best month of his career with an overtime win Sunday on the road course at Indy to give him two victories in the last five Cup races.

“We just know what we’re capable of, and we did that at Road America,” Reddick said. “If we change nothing, we keep working really, really hard, we find a way to victory lane. Really glad to be able to do it here in Indianapolis.

“This is one really special place to race, and really excited to kiss the bricks.”

Reddick broke through for his first career victory on July 3 at Road America in Wisconsin, then announced nine days later he was leaving Richard Childress Racing in 2024 to drive for 23XI, the team owned by Denny Hamlin and Michael Jordan.

Win No. 2 seemed to be easily within reach as Reddick was comfortably out front for 15 late laps when debris from Christopher Bell’s car brought out the fourth caution of the race with only six to go.

It set up a restart with three laps remaining and Reddick lined up alongside road course ace Chase Elliott, who briefly got past Reddick for the lead until he was spun for another caution that sent the race into overtime.

Reddick on the next restart had to hold off defending race winner AJ Allmendinger, who also won Saturday in the Xfinity Series. But Allmendinger was physically exhausted and struggling because his cooling device had not worked the entire race, and he hardly challenged Reddick at all.

Allmendinger collapsed when he climbed from his car. His wife and team personnel were seen draping his head in wet towels and dumping water over him before Allmendinger was taken to the care center.

So it was Ross Chastain who made Reddick claw his way to the Yard of Bricks.

Chastain missed the first turn completely and used the access road to return to the racing course ahead of Reddick and the apparent new leader. Reddick chased him for an entire lap around the 2.439-mile course and finally reclaimed the lead in time to lead the entire final lap.

“I couldn’t believe he got ahead of me,” Reddick said. “I was kind of waiting to see if he was going to have a penalty because I didn’t want to move him out of the way and make his race worse than what it was. But hey, we made it work. Hats off to Ross for trying to do that, but really glad it didn’t end up working out because I’d have been pretty (angry).”

NASCAR after the race penalized Chastain for using the access road, which dropped him to 27th.

“I thought we were four-wide and couldn’t go any farther right,” said Chastain, “and decided to take the NASCAR access lane out there.”

Reddick’s win made him the first RCR driver since Kevin Harvick in 2013 to win multiple races in a season, and multiple victories for RCR in a season for the first time since 2017.

It was RCR’s fourth win at Indianapolis as Reddick joined Dale Earnhardt, Kevin Harvick and Paul Menard as Indy winners for Richard Childress. The previous three wins were on the Brickyard’s oval.

But Childress still seemed chapped by Reddick’s early decision to leave in 18 months, specifically citing his cordial split with Harvick at the end of the 2013 season.

“Well, Kevin and I talked through his whole deal and we made a joint announcement. He won four races that year, and we almost won the championship,” Childress said. “This one didn’t happen like that.”

But the owner said he’d still celebrate with Reddick and his sponsors, and he later was alongside Reddick for the customary celebration of kissing the yard of bricks.

Austin Cindric, who drives for track owner Roger Penske, finished second in a Ford and was followed by fellow rookie Harrison Burton, who was a career-best third for Wood Brothers Racing. The No. 21 Ford that Burton drives is an offshoot of Team Penske.

Todd Gilliland was next in fourth for his career-best finish, and the rookie led his first career Cup laps when he was out front for four laps in the final stage.

Bubba Wallace in a Toyota for 23XI was fifth and followed by Joey Logano of Penske and finally Allmendinger, who dropped to seventh on the overtime restart. Michael McDowell was eighth and followed by Cole Custer of Stewart-Haas Racing and Chris Buescher of RFK Racing as Ford drivers took seven of the top-10 spots in a race won by a Chevy.

Chevrolet has now won 10 straight Cup races on road courses win since the manufacturer’s 2021 milestone 800th win at Circuit of The Americas.

Kyle Larson had a lousy 30th birthday with a long Sunday at Indianapolis that ended with a frightening crash in which the brakes on his Chevrolet appeared to fail.

The reigning NASCAR champion was already five laps down because of an early flat tire. His day ended early when Larson seemed to have no ability to slow his car as he sailed into a turn and directly into the side of Ty Dillon’s car at full speed.

The hit destroyed Dillon’s car. Once Larson was out of his own car, he jogged over to Dillon to check on him.

“All I saw was a blue flash,” Dillon said. “That’s the hardest I’ve ever been hit.”

Larson declined comment as he exited the infield care center.

NASCAR races Sunday at Michigan International Speedway, the opener for the final four-week stretch to finalize the playoff field. Ryan Blaney is the defending race winner.