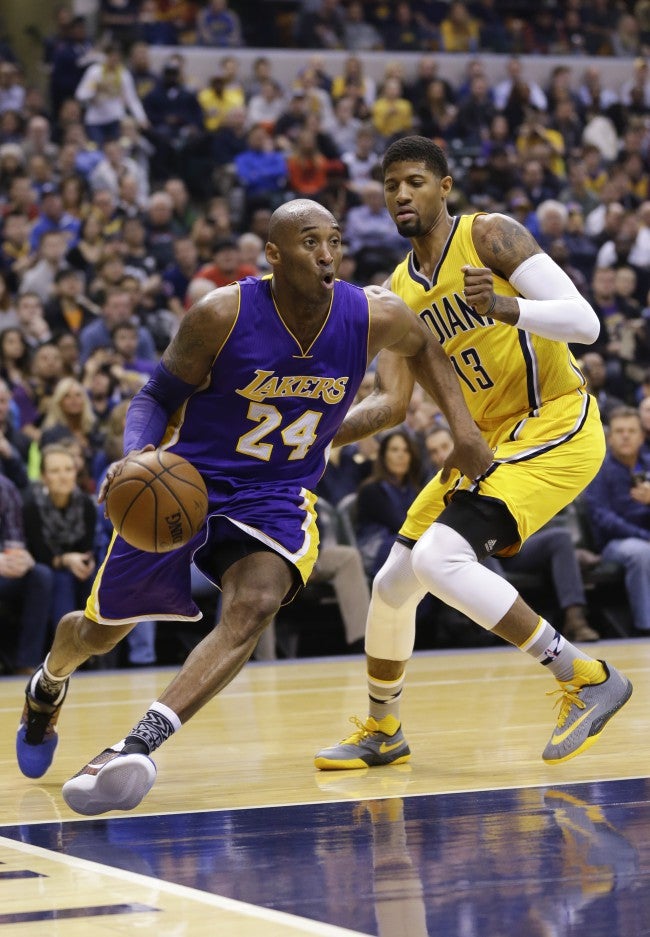 INDIANAPOLIS (AP) – Indiana’s Paul George scored all seven of his second-half points in the final 71 seconds Monday night and Monta Ellis made two free throws with 20.6 seconds left to seal an 89-87 victory over the Los Angeles Lakers.

George finished with 21 points and nine rebounds. Myles Turner added 14 points and 13 rebounds on a night the Pacers (28-24) blew a 17-point second-half lead, then scored nine straight points for the win.

Kobe Bryant scored 19 points in his final appearance in Indianapolis. He made three straight 3-pointers to give the Lakers an 82-79 lead with 2:30 left to play. But he also missed two 3s in the final 20 seconds.

When he was pulled out of the game with 10.8 seconds to go, the Pacers’ crowd serenaded him with chants of “Ko-be, Ko-be.”

It was a rugged night for both teams.

George made only one basket in the second half, a drive past Bryant for a three-point play that gave Indiana an 86-84 lead with 38.3 seconds left. He finished 6 of 18 from the field and 2 of 10 from 3.

Indiana used a 16-4 second-quarter run to take the lead then extended it to 17 late in the third quarter.

The Lakers rallied with a 12-0 spurt to finish the quarter but couldn’t get closer than four until Bryant’s late flurry.

Bryant has fond memories of playing the Pacers. He scored a series-record 45 points in January 2006, and his late tip-in in Game 4 of the 2000 NBA Finals, at Indiana, swung the series as Bryant won his first championship. “This is where it all started,” Bryant said, reminiscing about staying at a hotel two hours away. When he was reminded two hours away would put him in Illinois, Bryant responded: “Well, I may be exaggerating a little bit. But it seemed like a long ways out.”

Lakers: Are 5-25 on road this season including 1-8 in their last nine. … Two-time All-Star Roy Hibbert missed his first game of the season with a sprained left ankle – in his first trip back to Indiana since being traded by the Pacers last summer. … Julius Randle had 15 points and matched his career high with 19 rebounds. … Jordan Clarkson scored 10 points, his 22nd consecutive game in double figures.

Pacers: Pulled off first sweep of Lakers since 2013-14 and only their third ever…. Former Dodgers pitcher Carl Erskine performed the National Anthem on his harmonica. Erskine lives in Anderson, Indiana, about 30 miles north of Indianapolis. … Pacers center Ian Mahinmi sustained a cut above his eye on the first possession of the game, went to the locker room and had eight stitches before returning to the game at the start of the second quarter with a large bandage over the stitches. He finished with 11 points and five rebounds.