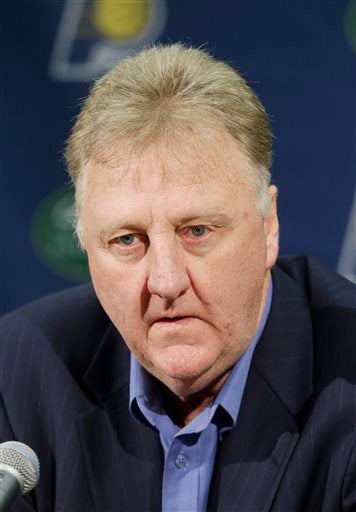 INDIANAPOLIS (AP) – The Indiana Pacers might be getting a new look next season.

Two days after being eliminated from the playoff race, president of basketball operations Larry Bird told reporters he wants the Pacers to follow the NBA’s new trend by playing faster and smaller.

It would be a dramatic style change for a team that built its reputation around old-school basketball. But after an injury-plagued season left Indiana out of the playoffs for the first time in five years, Bird is trying to come up with a blueprint that will put Indiana back in the title conversation.

“What we’d like to do is score more points and to do that, you’ve got to run, you’ve got to play a little smaller,” Bird said, emphasizing the need to do it in a controlled fashion. “I would like to see Paul (George) play some four (power forward), like to play smaller, get up and down the court a little faster. So there’s a lot of work to do this summer, and obviously, it depends on the talent you have.”

The Pacers have seen how well it works.

Miami used that philosophy to beat them in the 2013 and 2014 Eastern Conference finals, Atlanta pushed them to the brink in the first round of last year’s playoffs, and they’ve noticed how teams such as Golden State, San Antonio and Boston have succeeded with it.

Indiana may finally have enough pieces in place to make it work, too.

After George missed 76 games with a broken right leg, George Hill and C.J. Miles emerged as the team’s most consistent scorers. Hill finished with a team best 16.5 points per game, while the 6-foot-6 Miles scored 13.5 points and was the Pacers’ top 3-point threat.

Backup point guard Rodney Stuckey was Indiana’s No. 3 scorer at 12.6 points and can now become a free agent, though Bird and coach Frank Vogel both said they’re hopeful Stuckey will be back.

George also is expected to be much closer to his All-Star form next fall despite sustaining a strained left calf in the season finale. Vogel said an MRI showed nothing more than a strain.

Chris Copeland will be a restricted free agent and having a lottery pick in June’s draft gives the Pacers a chance to choose a player who can help immediately or use the pick as trade bait to get another veteran.

“I’m excited about it,” Vogel said. “Look, we’ve been in the bottom third (of the league) offensively for a couple years now. Our style of play is based on how our roster is set up and playing to our personnel’s strengths, but I really think using Paul at the four spot, some, could A) make us faster and B) give us better spacing to be a better offensive unit.”

That does not mean Indiana’s big men are out of jobs.

If David West returns, the 34-year-old power forward will probably remain the starter though he’s likely to play fewer minutes. West has a player option for $12.6 million, and Bird believes he will be back.

The two-time All-Star is coming off a season in which he averaged 10.1 points and 1.6 blocks, the lowest totals since his rookie season, and he has a $15.5 million player option. The fan base has soured on Hibbert over the past two seasons, and even Bird wasn’t impressed with what he saw from the 7-foot-2, 290-pound rim protector this season.

And while Bird would like to keep most of the Pacers’ roster intact, he knows Indiana’s best shot to win a title is to make some in-house changes.

“It’s a pretty simple game. If you move the basketball to the open player and you cut, you’ll get open shots every time down the court and we don’t do that,” Bird said. “We don’t set our guys up to receive the passes on the wings the way we should. We don’t set good, hard picks. We slip every pick. We don’t set picks. So we’ve got to get back to just basic basketball and doing the things that’s necessary to score points.”

Notes: Vogel said the Pacers would not sacrifice defense for points and that he expected all three of his assistant coaches to be back next season. … Vogel did not have an update on Copeland’s condition. The veteran forward returned to Indianapolis less than a week after having surgery for stab wounds to his left elbow and abdomen. … Bird said he was leaning against re-signing C.J. Watson because of his inability to stay healthy.