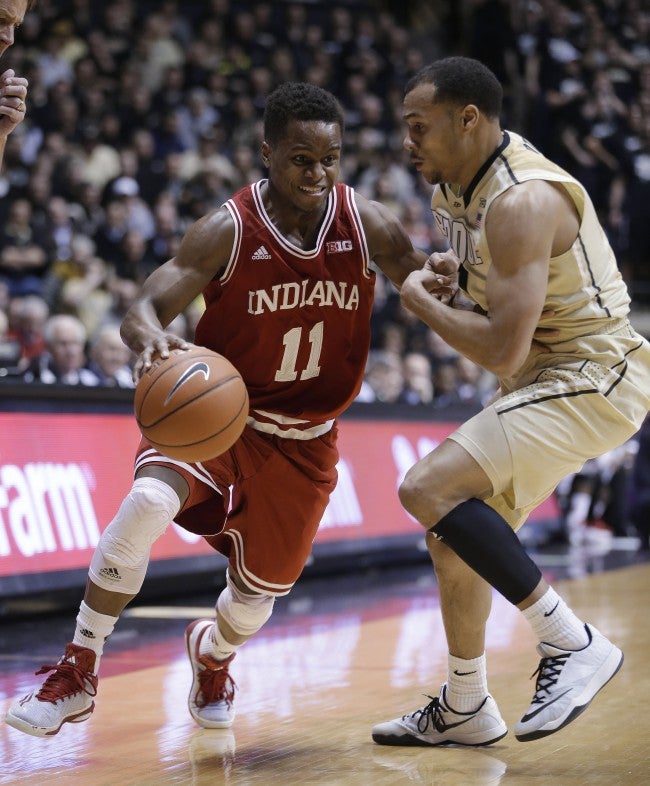 He finally got a glimpse at the result Wednesday night.

The Boilermakers clamped down on the Big Ten’s best scoring team by harassing Indiana’s shooters into tough shots and poor decisions, as Purdue ran away from its biggest rival 83-67.

“We were able to get into those guys and make things tough,” Rapheal Davis said after scoring 19 points. “We limited their open looks, got into them early, and got physical early.”

For Purdue (13-8, 5-3) it was another stunning chapter in a turnaround season.

The Boilermakers have now won three of the last four.

And after ending a 13-game losing streak against ranked teams with Saturday’s win over Iowa, the Boilermakers have pulled off back-to-back upsets. They’re also off to their best conference start since going 6-2 in 2010-11, and they’ve already matched last season’s victory total in league play.

How has Purdue done it? With balanced scoring and a defense that seems to be getting better by the game.

In addition to Davis’ big night, Bryson Scott had 11 points and six rebounds while A.J. Hammons finished with 11 points and a career-high eight blocks — the highest single-game total of any Purdue player other than Joe Barry Carroll, who set the record of 11 in 1977 and had nine in another game in 1978.

“I just thought our attention to detail was really good and never let one of their guys, really get going,” Painter said after an almost picture-perfect performance.

What impressed Painter most was how Purdue played as a unit.

In the first half, Indiana went nearly 5 ½ minutes without a basket. After ending that drought, they managed just one basket in the next five minutes – a drought that put the Hoosiers in a 30-15 hole that it never recovered from.

Kevin “Yogi” Ferrell scored 15 of his game high 21 points in the second half and James Blackmon Jr. added 13, not nearly enough to prevent the Hoosiers from enduring a two-game skid for the first time this season.

“Really, the hole that we built for ourselves was on the offensive end,” coach Tom Crean said. “he hole we built was not moving the ball the way we needed to offensively

With a sellout crowd roaring almost from the moment Mackey Arena filled up, Purdue didn’t disappoint.

Purdue scored the first eight points of the second, and Indiana never got closer than 10 the rest of the way.

“Hopefully getting back-to-back Top 25 wins will give us some confidence that we can compete with teams that I feel that are NCAA tournament teams,” Painter said.

Hoosiers: Indiana came into the game averaging 81.4 points this season. But it’s been a different story in Big Ten play. Indiana has been held to fewer than 80 points six times in eight league games including Wednesday night when they shot just 37.9 percent from the field and had just nine baskets in the first 23 minutes.

Boilermakers: Free throws had been a major problem all season for Purdue – until Wednesday. Purdue put away this victory by going 25 of 33 from the line. It was a stark contrast to their previous six games, when they were just 68 of 117, and their free-throw percentage of 66.8 coming into Wednesday’s game.

Somehow, Purdue has created a winning formula without winning the rebounding battle. Four days after allowing Iowa to grab 24 offensive rebounds, they let Indiana come up with 19 while outscoring the Boilermakers 17-6 on second chance points.

The Hoosiers can’t afford to let Wednesday’s loss linger. After Rutgers, they visit No. 5 Wisconsin, host defending Big Ten champ Michigan and travel to No. 16 Maryland. The good news: Six of their last 10 Big Ten games are at home.