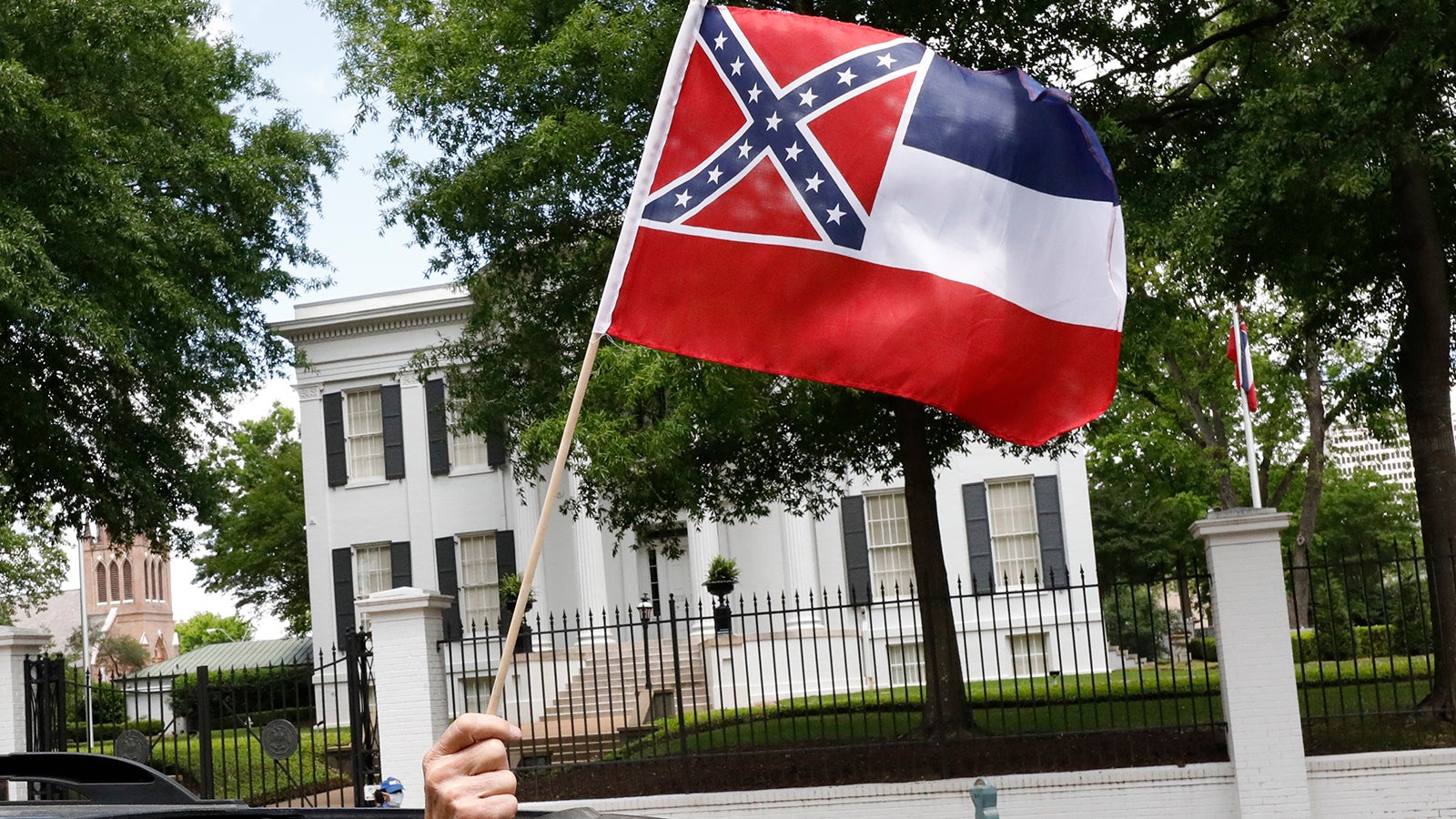 In this April 25, 2020 photograph, a small Mississippi state flag is held by a participant during a drive-by "re-open Mississippi" protest past the Governor's Mansion, in the background, in Jackson, Miss. This current flag has in the canton portion of the banner the design of the Civil War-era Confederate battle flag, that has been the center of a long-simmering debate about its removal or replacement. (AP Photo/Rogelio V. Solis via CNN)
by: Paul P. Murphy, CNN
Posted: Jun 19, 2020 / 11:39 AM EST / Updated: Jun 19, 2020 / 11:39 AM EST

(CNN) — The Southeastern Conference, the preeminent and powerhouse collegiate athletics conference in the South, made their message clear: Mississippi must change their flag or they may not get championship events.

Mississippi is the only state in the South that has yet to remove the Confederate flag from being prominently displayed on their state flag. The campaign to remove it has been ongoing for decades but has received renewed attention as more and more Confederate memorials, monuments and statues around the United States have been taken down.

“It is past time for change to be made to the flag of the State of Mississippi,” SEC commissioner Greg Sankey said in a statement posted to Twitter. “Our students deserve an opportunity to learn and compete in environment that are inclusive and welcoming to all.”

Sankey went on to say that if Mississippi refuses to change their flag this time, they will consider banning championship events from the state until it is.

CNN has reached out to Mississippi Gov. Tate Reeves for comment on the SEC decision. In the past, Gov. Reeves has not taken a side on the issue, only saying that the people of Mississippi should vote on changing the flag.

“I believe that some point people will want to change the flag, but it should be done by a vote of the people,” Gov. Reeves said at a June 10 press conference, reiterating his long held position. “Not by a vote of politicians doing a backroom deal in Jackson.”

“Mississippi needs a flag that represents the qualities about our state that unite us, not those that still divide us,” Ole Miss Chancellor Glenn Boyce and Vice Chancellor for Intercollegiate Athletics Keith Carter said in a joint statement. “We support the SEC’s position for changing the Mississippi state flag to an image that is more welcoming and inclusive for all people.”

Opponents of changing the flag often cite a vote 19 years ago, in which a 2-1 majority of voters in Mississippi wanted to keep the flag.

Since 2019, Mississippi has been selling specialty license plates featuring a re-imagined state flag without Confederate imagery. That flag was created in 2014 by native Mississippian Laurin Stennis.

Georgia was the latest state to remove the Confederate battle emblem from its state flag. It took Georgia two years to ultimately decide on a new flag after a successful legislative vote to change it in 2001.