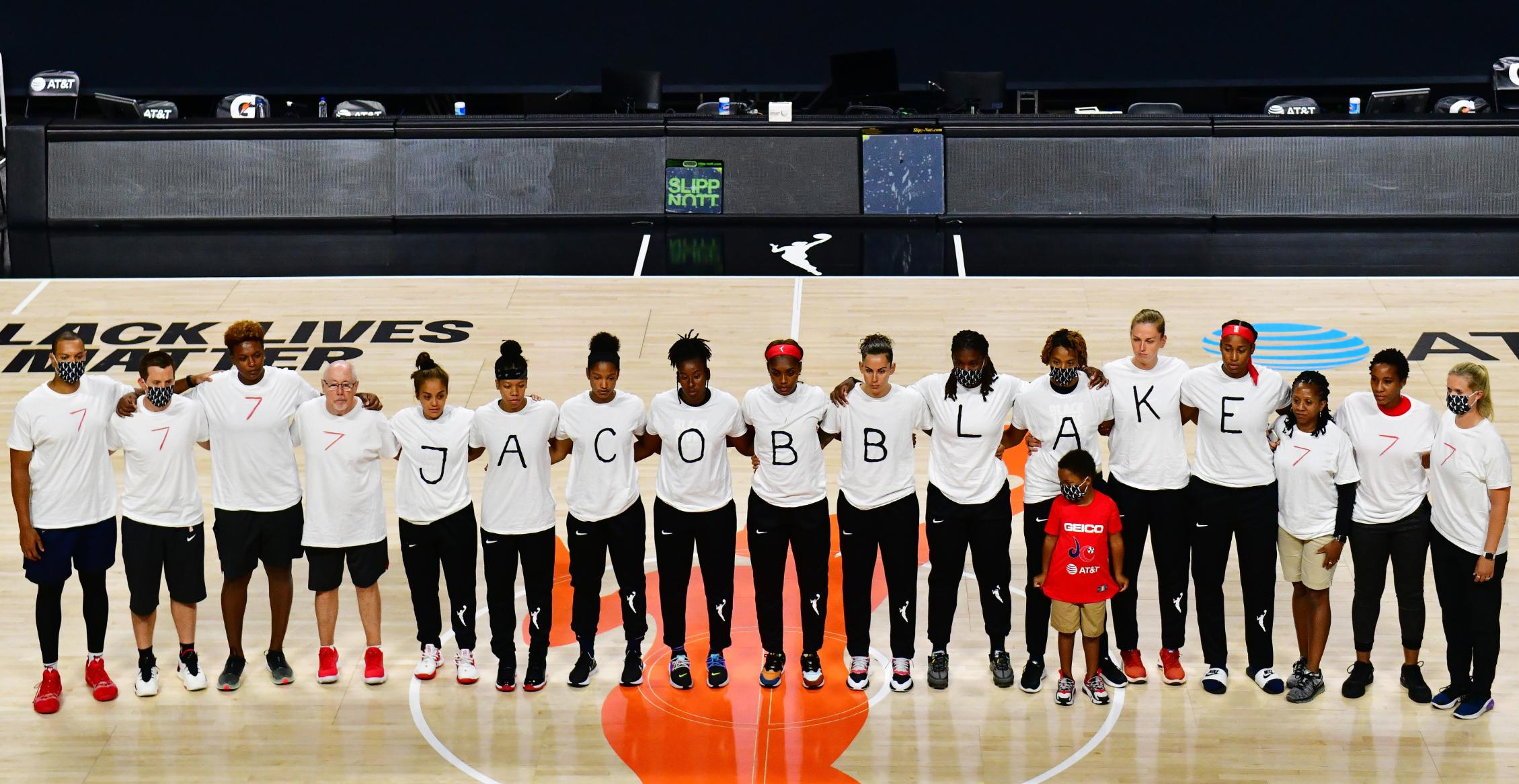 (CNN) — Across the sports world, athletes took a stand for Black Lives Matter on Wednesday night by holding an unprecedentedwildcat strike and refusing to play their regularly scheduled games.

The decision started with the NBA’s Milwaukee Bucks and stemmed from the police shooting of Jacob Blake in Kenosha, Wisconsin, on Sunday. The stand quickly spread across a number of sports — from basketball courts in Florida to baseball diamonds in California to soccer fields in places like Miami and Salt Lake Cityand even into the broadcast booth, where TNT’s “Inside the NBA” analyst Kenny Smith took off his mic and walked off stage.

But the issue is bigger than Jacob Blake or George Floyd or Breonna Taylor. Malcolm Jenkins of the NFL’s New Orleans Saints positioned the protests as a response to the systemic racism baked into America, including police violence, cycles of incarceration, and the plunder of generational wealth.

“Until we continue to demand it, until ‘Black Lives Matter’ goes from just an idea or a goal that we’re trying to attain as a society and is actually realized in the streets, we won’t see any peace,” he said. “And I think we’ll continue to see athletes, entertainers as well as citizens disrupt the status quo until that’s recognized.”

Here’s a look at the teams and athletes who pulled back in order to have their voices be heard.

The Milwaukee Bucks did not emerge from their locker room before the scheduled tip at 4 p.m. Wednesday as they decided to refuse to play their playoff game.

Soon after, the NBA announced it would postpone Game 5 of three different playoff series — the Bucks vs. Orlando Magic, Houston Rockets vs. Oklahoma City Thunder and Los Angeles Lakers vs. Portland Trail Blazers.

The postponed games have not yet been rescheduled.

Three playoff games on Thursday also were postponed but the league said it hoped to resume games Friday or Saturday.

Strikes are banned under the NBA’s collective bargaining agreement, which means the Bucks players broke their own contract to protest racial injustice and police violence.

In a statement issued on Wednesday afternoon, the Bucks players said they are “calling for justice for Jacob Blake and demand the officers be held accountable. “

“The past four months have shed a light on the ongoing racial injustices facing our African American communities. Citizens around the country have used their voices and platforms to speak out against these wrongdoings,” they said in a statement.

“Despite the overwhelming plea for change, there has been no action, so our focus today cannot be on basketball.”

The Los Angeles Lakers also offered a statement in support of the players’ decision.

“Eighty percent of NBA players are Black men. We cannot love them for the joy and entertainment that they bring to the world, yet sit in silence and fail to use our platforms and resources to amplify their voices when they demand the justice and equality that America has promised us all, but denied Black people for too long,” the Lakers said.

Representing the six teams slated to play on Wednesday, Atlanta Dream player Elizabeth Williams announced that WNBA players were standing in solidarity with “our brothers in the NBA” and also would not play.

The ESPN2 broadcast showed players from the six teams scheduled to take the court in locked arms and kneeling while wearing shirts spelling out Jacob Blake’s name.

The WNBA announced that the three games scheduled for Wednesday evening had been postponed. On Thursday, the league announced the postponement of the day’s three scheduled games as well.

Instead of playing Thursday, the entire league of WNBA players stood arm-in-arm in solidarity.

“It is important to note that this is not a strike,” said Women’s National Basketball Players Association (WNBPA) president and Los Angeles Sparks star Nneka Ogwumike, reading a statement from the players, to ESPN’s Holly Rowe. “This is not a boycott. This is affirmatively a day of reflection. A day of informed action and mobilization.”

Ogwumike said players plan to play in games that are scheduled for Friday.

“I feel like as a group we decided last night that we want to play,” Ogwumike said. “There are games scheduled tomorrow. That’s what we’re ready to do, but that doesn’t come without, of course, demands of players to continue to amplify our voices in more ways than when we came here.

“We realize that the work is not easy, but we also understand that the work is never done. There are things that happen that just allow us times to take a moment — that’s fair; we can take a moment — and that moment we came together and we decided we need time for ourselves to come back, regroup and continue to amplify our voices, and be there for our communities and demand change from the leaders that are representing us right now.”

“With our community and our nation in such pain, we wanted to draw as much attention to the issues that really matter, especially racial injustice and systemic oppression,” a joint statement from the Brewers and Reds said.

“Given the pain in the communities of Wisconsin and beyond following the shooting of Jacob Blake, we respect the decisions of a number of players not to play tonight,” a league statement Wednesday said. “Major League Baseball remains united for change in our society and we will be allies in the fight to end racism and injustice.”

Mets player Dominic Smith, who is Black, was driven to tears on Wednesday, telling reporters after the Mets defeated the Marlins, “I think the most difficult part is to see people still don’t care. And for this to continuously happen it just shows just the hate in people’s heart and that just sucks. Being a Black man in America is not easy.”

In a powerful moment Thursday at Citi Field in New York, the Mets starting defense took the field as scheduled, and then the remaining players for both teams came out of their dugouts and a moment of silence was observed, which the SNY television broadcast said lasted 42 seconds, and then walked off the field.

Before he left the field, Miami Marlins player Lewis Brinson laid a “Black Lives Matter” shirt at home plate before leaving the field.

MLB is scheduled to observe Jackie Robinson Day on Friday to honor the color-barrier-breaking Hall of Famer, who wore number 42.

The Denver Broncos joined the Arizona Cardinals, Indianapolis Colts, Washington Football Team and New York Jets in forgoing practice to allow players to weigh in on what they can do to effect change.

The Chicago Bears said in a statement Thursday that the organization had decided to pause football activities “to voice to each other, our coaches and our staff where we stand on the real issues around race and police brutality in our country.”

“We had a productive discussion, but we all agreed that talks and discussions are simply not enough anymore and we need action,” the statement said. “We are putting in plans to take action in our communities and together we believe we can make a real difference. We need action not only today, but in the days to come.”

“The entire Major League Soccer family unequivocally condemns racism and has always stood for equality, but we need to do more to take tangible steps to impact change,” MLS said. “We will continue to work without players, our clubs and the broader soccer community to harness our collective power to fight for equality and social justice.”

Tennis superstar Naomi Osaka announced Wednesday that she would not play in the Western & Southern Open semifinals on Thursday.

“Watching the continued genocide of Black people at the hand of the police is honestly making me sick to my stomach,” she wrote.

Later on Wednesday, after Osaka’s post, it was announced that the Western & Southern Open would pause tournament play on Thursday, resuming on Friday.

By Thursday, a statement by her management team to The Guardian and The New York Times indicated she planned to play Friday instead.

“They offered to postpone all matches until Friday and in my mind that brings more attention to the movement,” Osaka said. She also thanked the WTA and the tournament for their support.

A WTA spokesperson tells CNN that Osaka did not officially withdraw from the Western & Southern Open on Wednesday. She is scheduled to play Elise Mertens in the semifinals on Friday.

The NHL’s Stanley Cup Playoffs continued Wednesday with two games. However, the league opted to postpone two games scheduled for Thursday and two scheduled for Friday.

“After much discussion, NHL Players believe that the best course of action would be to take a step back and not play tonight’s and tomorrow’s games as scheduled,” a Thursday joint statement from the league and the players association said. “The NHL supports the Players’ decision and will reschedule those four games beginning Saturday and adjust the remainder of the Second Round schedule accordingly.

“Black and Brown communities continue to face real, painful experiences. The NHL and NHLPA recognize that much work remains to be done before we can play an appropriate role in a discussion centered on diversity, inclusion and social justice.”

Before the start of Game 3 of the second-round series between the Tampa Bay Lightning and Boston Bruins on Wednesday, there was a moment of reflection for racism in response to the Blake shooting.