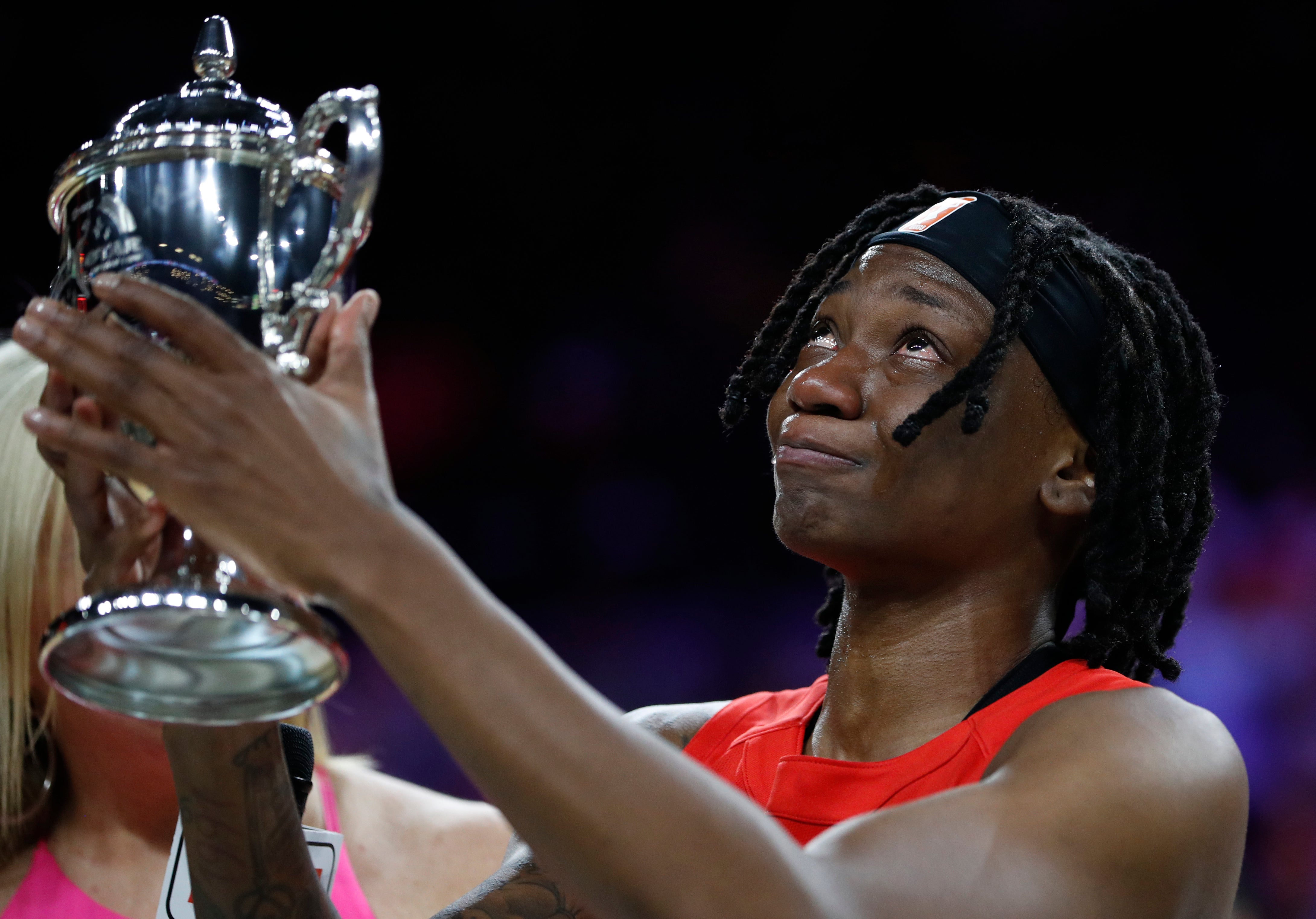 LAS VEGAS (AP) — Erica Wheeler hoped to make her All-Star debut an unforgettable one. She certainly did, walking away with the MVP award.

Wheeler, who was the first undrafted player to debut in the league since 2003 to earn an All-Star spot, scored 25 points and led Team Wilson to a 129-126 victory over Team Delle Donne on Saturday. The Indiana Fever guard got emotional when she accepted the MVP award, tearing up.

“To me it was to make my mark and I think I did that,” said Wheeler, who was one of six first-time All-Stars. “I’m a no-name and left today with a name that everyone can remember.”

Her fellow All-Stars also were nearly as emotional, knowing what Wheeler went through to even make the league.

“I was crying my eyes out,” team captain A’ja Wilson said. “It’s real moments like that that people don’t see. That’s what it’s all about.”

Phoenix’s Brittney Griner had an All-Star record three dunks, including an impressive two-handed jam where she hung on the rim over Aces star Liz Cambage. The Australian 6-foot-8 center had her own fun in the game, playing point guard. She waved off Aces teammate Kayla McBride when she tried to come over and take over the guard position.

The WNBA experimented with two new rules during the contest, having a 20-second shot clock and allowing both teams to sub in one player on offense in a hockey-like move once a quarter. The shot clock barely made a difference as neither team came close to seeing it reach single digits. Team Delle Donne was the first to use the hockey-like sub putting Courtney Vandersloot in late in the first quarter.

DeWanna Bonner rallied Team Delle Donne in the third quarter, scoring 11 points in the period to get it within 10. The team cut it to three with 41.5 seconds left on Nneka Ogwumike’s jumper. Wheeler answered though as the shot clock was winding down, hitting a 3-pointer from the top of the key. She did a dance on the other end to celebrate.

The 255 combined points are the most in All-Star history.

With the event in Las Vegas, it was a star-studded event. NBA player Chris Paul was sitting courtside as well as Kobe Bryant, who got a huge ovation from the crowd when he was introduced. Team Delle Donne member Jewell Loyd came over and gave Bryant’s daughter a hug. Loyd and Bryant go back a long way. The trio took a photo together at the half. Bryant was sitting a few seats over from Sue Bird and her girlfriend Megan Rapinoe, who led the U.S. women’s soccer team to the World Cup title earlier this month. Bird, Rapinoe and Breanna Stewart helped throw T-shirts to the crowd in the fourth quarter.

Las Vegas certainly put on a show with members of Cirque du Soleil performing while the All-Stars were being introduced. Blue Man Group was going throughout the crowd spraying streamers.

POWER COUPLE: Alie Qugiley hit a 3-pointer in the third quarter over her wife Vandersloot. Quigley gave a smile and a glance back to her Chicago Sky teammate as she was running down the court. A few minutes later Vandersloot airballed a 3 and Quigley gave her a hug as they walked down the court. Quigley then hit another turnaround 3-pointer with Vandersloot running by as she fell into the front row. All she could do was put her hands up and laugh.

“She was talking a lot of mess during the week how she would lock me up on defense,” Quigley said. “I had to take the opportunity and show her who’s boss. I said sorry a couple times too.”

STAYING ACTIVE: Team captain A’ja Wilson wasn’t able to play in the game because of an injured right ankle. She thanked the crowd in a heartfelt speech before the tip. Wilson was active on the sidelines during the game cheering on her teammates. She was also live-tweeting on the TwitterSports handle during the game, becoming the first pro athlete to do that from the bench during a league-sanctioned game.

INTRO PRESSER: WNBA Commissioner Cathy Engelbert held her first official press conference since she started her job 10 days ago. The commissioner talked about a variety of subjects including the collective bargaining agreement, domestic violence and potential expansion. Engelbert also introduced a new initiative by USA Basketball that will expand their training over the next yearleading up to the 2020 Olympics.

UP NEXT: The WNBA regular season resumes Tuesday. With next year being an Olympic year it’s unlikely there will be an All-Star Game as the league tends to take a month off in July for the Olympics.