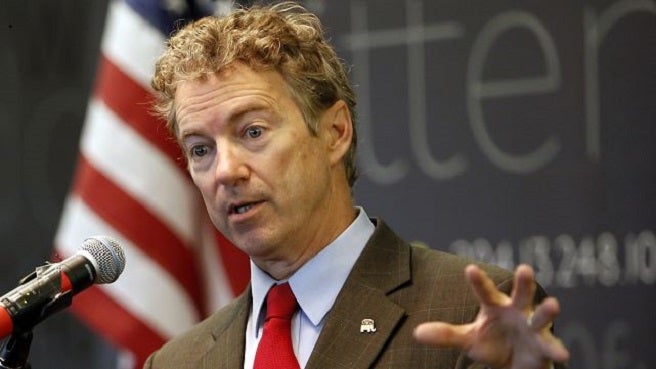 WASHINGTON (NEXSTAR) — President Donald Trump says he should be able to face his accuser – the whistleblower who sparked the impeachment inquiry against him.

The president’s Republican allies in Congress are calling for the whistleblower to come forward and testify as part of the inquiry. Kentucky Sen. Rand Paul is leading the charge, pushing for the person’s identity to be revealed during a campaign event on Monday.

“The whistleblower needs to come before Congress as a material witness,” Paul said. “To the media: Do your jobs and print his name!”

The whistleblower complaint sparked the inquiry into whether Trump pressured Ukraine to investigate former vice president Joe Biden and his son, Hunter. Or, as the president put it, the “deranged, delusional, destructive and hyper-partisan impeachment witch hunt.”

His son, Donald Trump Jr., has already tweeted the name of the person he thinks is the whistleblower.

“He worked for Joe Biden at the same time Hunter Biden was getting money from corrupt oligarchs,” Paul added.

Sen. Bob Casey, D-Pennsylvania, says Congress must uphold the whistleblower laws, which are designed to protect those who come forward with charges of wrongdoing.

“Whistleblowers should never ever be exposed,” he said.

Federal law provides some protection for whistleblowers but it’s unclear if those protections include anonymity.

“The 6th Amendment says very clearly that if you’re accused of a crime, you have a right to confront your accuser,” Paul said.

According to Casey, Congress and the executive branch have the duty to protect the identity of the whistleblower and safeguard them from retaliation.

“We have to call it out if any government official seeks to expose the whistleblower is always wrong,” he said.

Casey says if whistleblowers like this one aren’t safe to come forward, it won’t be possible to hold government accountable.