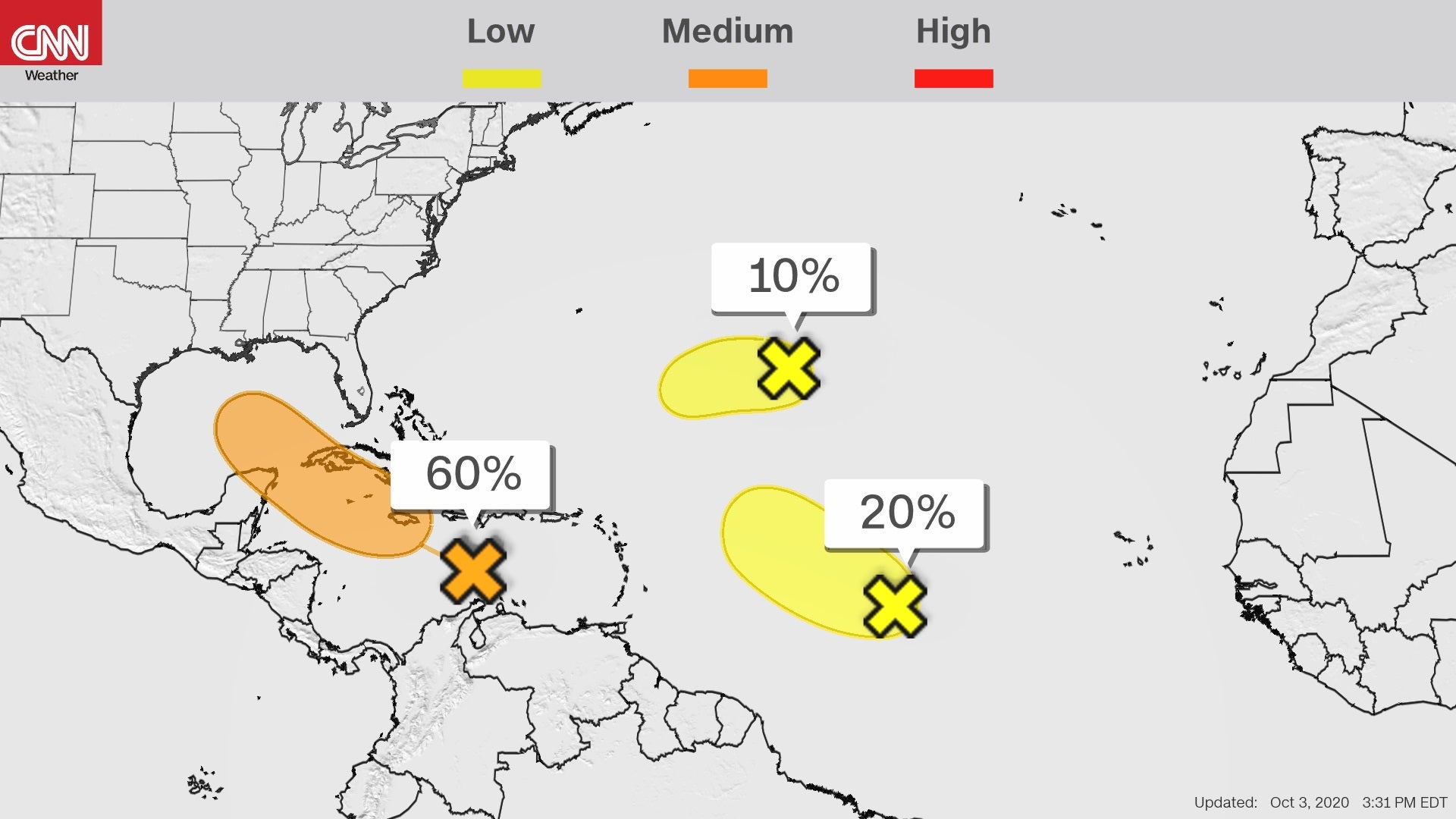 (CNN) — This year’s Atlantic hurricane season is on the verge of becoming the most active since 2005.

The year 2005, which brought us the retired names and memorable destruction of Katrina, Rita and Wilma, ended up with the most number of named storms ever — 28.

It was also the first time the normal list of storm names was exhausted, prompting the use of names beginning with letters from the Greek alphabet.

The 2020 season has about two months left. So far this year, we’ve seen 25 named storms(the average for anentire season is 12), but roughly half as many hurricanes at eight and only two major storms (Category 3 or higher).

We’re up to the name Gamma, so we need three more to reach the 2005 mark in Greek names.

But numbers of storms aren’t everything.

This year a record was set when four storms making landfall underwent the phenomenon known as rapid intensification. That happens when a storm’s maximum speed increases by 35 mph in a 24-hour period.

Hanna was first, jumping from 45 to 80 mph maximum winds in 24 hours on July 25, prior to its landfall on Padre Island, Texas.

In late August, as Laura was bearing down on the Louisiana coast, it’s maximum winds leaped from 65 mph to 110 mph from 5 a.m. August 25 to 5 a.m. August 26. It made landfall near Cameron, Louisiana, early on August 27.

A few weeks later, Sally astounded weather-watchers everywhere when it only took 12 hours for the winds to rocket from 60 mph to 100 mph on September 14. Two days later, it came ashore in Gulf Shores, Alabama.

On Saturday, Gamma made landfall on the Yucatan Peninsula. While not quite a hurricane when doing so, it did intensify from a tropical depression with 35 mph winds Friday to 70 mph when it made landfall 24 hours later.

The season is not over yet

October is the third most active month of the Atlantic hurricane season, behind September (first) and August (second).

During an average season, we see about two named storms in October and one in November. If this were a “normal” hurricane season, we would still likely have a few more storms possible through the end of November.

But this year is not a “normal” season. It has been forecast for months to be very active.

Back in August, the National Oceanic and Atmospheric Administration (NOAA) updated the hurricane season forecast and called for 19 to 25 named storms. Prior to this, the agency had never forecast up to 25 storms in a season.

As of Saturday, the National Hurricane Center (NHC) was tracking three other potential systems in the Atlantic. Two are located in the central Atlantic Ocean, and look the least promising with only a 10-20% chance of intensifying over the next five days.

The more impressive-looking tropical disturbance, currently located near Jamaica, has been given a 60% chance of development by the NHC.

This system, referred to as Invest 92-L, could take aim at the very warm waters of the Gulf of Mexico. Some long-range models are projecting it could land there by the middle of next week and, more importantly, intensify to hurricane strength.

If it earns a name, next on the list is the Greek letter Delta.

Obviously, there is lot of time between now and then so this system will have to be watched very carefully. However, unlike Gamma, whose northward motion is currently being stunted by a stationary front, Invest-92 could have fewer obstacles to clear to be added to this year’s very long list.

While the Atlantic hurricane season has already been very active, it’s not over yet. Technically the season does not end until November 30, but some years storms have continued well after that.