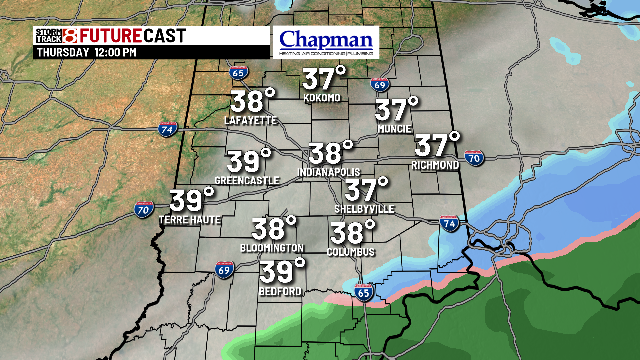 INDIANAPOLIS (WISH) – A damp start to the morning for those that live south of I-70. Otherwise, a lot of moisture will struggle to make it north Thursday morning. Some colder air will push through this morning with gusty winds pushing 20 mph from the north which will cool temperatures to the 30s midmorning.

Any moisture leftover in south and southeastern Indiana could transition to some snow with no accumulation. Clouds will break apart with some sunshine breaking through. That will warm temperatures to the lower 40s.

Thursday night lows will drop to the lower 20s and upper teens with a clear sky!

Friday will be a cold day with daytime highs in the upper 30s with a mainly sunny sky. Improvement in temperatures this weekend with highs in the mid-40s with sunshine and clouds. Even warmer Sunday with highs in the lower 50s with a few light afternoon and evening sprinkles possible.

Early next week harvests some big changes with highs during the afternoon in the lower 30s with snow showers through the afternoon and early evening. We could see some minor accumulations possible through early Tuesday. We could see some record cold early Tuesday morning with morning lows in the lower teens with day time highs in the mid to upper 20s.