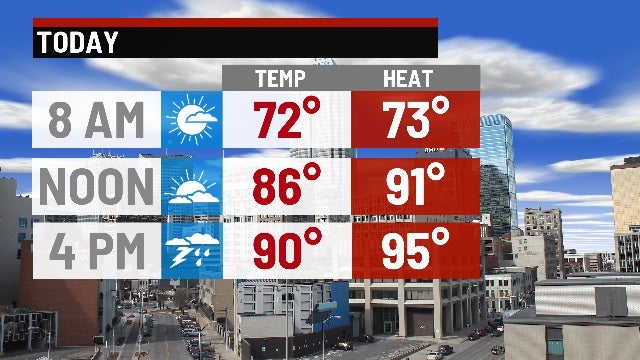 TODAY: We’ll see mostly sunny skies for much of the day Thursday. It’s going to be hot and humid. Highs climb into the upper 80s near 90. Heat index values or feels-like temperatures will be in the low to middle 90s. There’s a slight chance we may see an isolated shower or thunderstorm pop up in the afternoon or early evening.

TONIGHT: Any showers or storms that form will quickly fall apart once the sun sets. It’s going to be mild and muggy with lows falling into the upper 60s near 70.

FRIDAY: Mild and muggy for the end of the workweek. We’ll see partly cloudy skies with highs in the middle 80s. There’s a chance for a few scattered showers and thunderstorms later in the afternoon and early evening as a cold front moves through the state. Some of the thunderstorms may be on the stronger side. The Storm Prediction Center does have much of central Indiana under a marginal risk, the storms may reach severe criteria.

SATURDAY: Look for lots of sunshine to start the weekend with highs in the lower 80s. Less humid air arrives after the cold front moves through on Friday night.