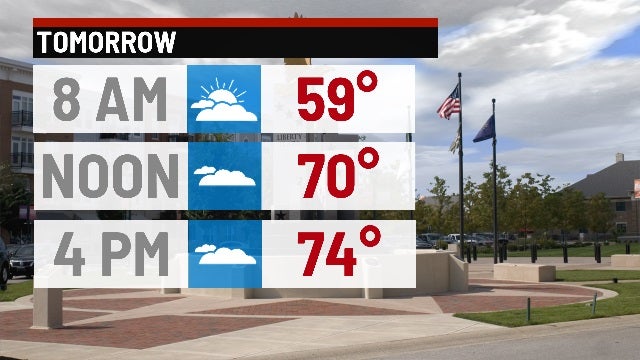 INDIANAPOLIS (WISH) — A clear and cool Saturday evening comes ahead of possible showers for the Brickyard 400 and temperatures as low as the 50s.

SATURDAY NIGHT: We’ll see a few clouds around parts of central Indiana. The evening will be pleasant with temperatures falling into the 60s. It’s going to be cool again early Sunday morning as lows fall into the upper 50s.

SUNDAY: We’ll see lots of clouds as a weak disturbance passes through. It’s going to be cooler, with highs in the low to middle 70s, There’s a chance for a few scattered showers in the afternoon. So if you’re going to be heading to the Brickyard 400, be prepared for a slight chance for a shower.

MONDAY: The rain comes to an end on Monday and we’ll see partly cloudy skies. It’s going to be warmer and a little more humid. Highs climb to around 80, which is near normal for this time of the year.

8-DAY FORECAST: While the calendar may say September, it’s going to feel like summer next week. Highs climb into the upper 80s near 90 on Tuesday and Wednesday. Tuesday looks sunny, but showers and storms are possible for Wednesday. Temperatures stay above normal through the end of the workweek.