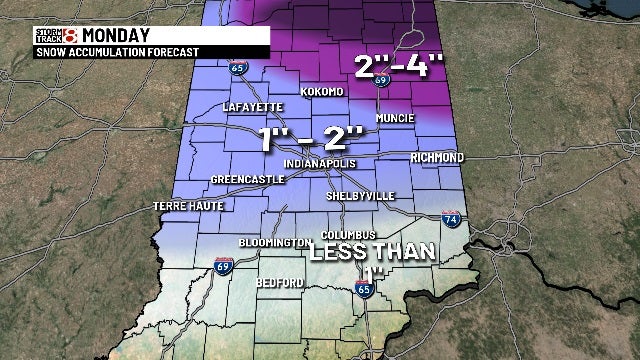 SUNDAY NIGHT: Skies become mostly cloudy Sunday evening with temperatures falling into the lower 40s. It will be dry overnight with lows in the 30s.

MONDAY: The early morning commute will be dry, but scattered rain and snow showers will begin to develop by late morning.

Right around lunch, a swath of rain and snow moves into central Indiana. The best chance of rain will be along and south of I-70. As colder air sinks southwards, everyone see the precipitation change over to snow by the early afternoon.

Total accumulations will be about 1-2 inches for most locations around central Indiana. Areas south of the city will pick up less, while areas north of Indianapolis around Kokomo and Muncie will pick up about 3 inches. Winds gust out of the north at 20-25 mph during the afternoon, which will create some blowing and drifting, reducing visibility at times. Highs will be early in the day in the middle to upper 30s and fall into the lower 30s by the late afternoon.

MONDAY NIGHT: The accumulating snow tapers off by early evening and we’re left with a few flurries. It turns cold with lows falling into the middle teens. Windchill values early Tuesday morning will be near zero in many spots.

TUESDAY: Feels like temperatures will be near zero early Tuesday morning. Look for partly cloudy skies for the afternoon with a little lake effect snow possible north and east of Indianapolis. Temperatures will be about 30 degrees below normal for this time of year. Highs stay in the low to middle 20s. A couple of record lows and a record low maximum may be tied or broken during this bitter blast.

8-DAY FORECAST: We’re in store for another cold start Wednesday morning with lows in the lower teens. Highs Wednesday climb near freezing with some sunshine. Temperatures gradually climb back into the 40s for the end of the workweek and next week. Quiet weather continues with mostly sunny skies.