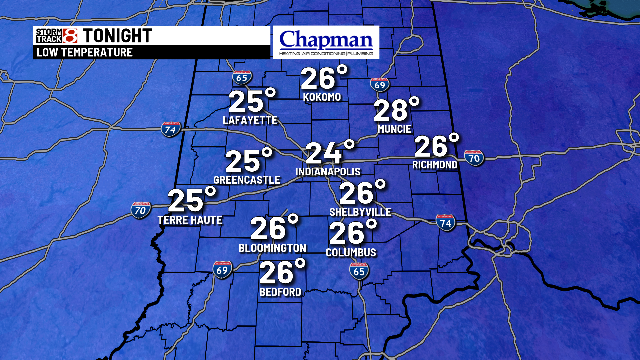 INDIANAPOLIS (WISH) — Temperatures in the 20s Friday morning could lead to some re-freezing on untreated roads.

Storm system responsible for the wintry mess of ice, sleet and snow will slowly move out late tonight.  We’ll still have to deal with some isolated light snow showers or freezing drizzle.  Nothing major, but certainly enough to slick up some roads.

We’ll dry out overnight, with a brief period of clearing skies, before more clouds move in as we head into daybreak, Friday.

Watch for some re-freezing on roads that have left untreated.  Temperatures fall to the middle 20s – which is plenty cold enough for some icy spots leading into Friday morning.

Pretty quiet day on tap.  We’ll be socked in with cloudy conditions for much of the day, and temperatures still running a good 10°-15° below normal for this time of year.

Temperatures remain cool both days this weekend.  A weak frontal system moving through could squeeze out some light rain and/or snow showers Sunday afternoon.  Little to no accumulation is expected.

We’ll get another brief dip in temperatures for Sunday and Monday, before we begin to rebound a bit heading closer to the holiday.  Most importantly, it appears we will settle into a relatively quiet pattern after Sunday afternoon, so weather shouldn’t be an issue for local or regional travelers Tuesday through Friday.  We should see temperatures rebound closer to average by mid-week, with highs near 50° for the Thanksgiving holiday.

by: Annessa Chumbley / 19 mins ago