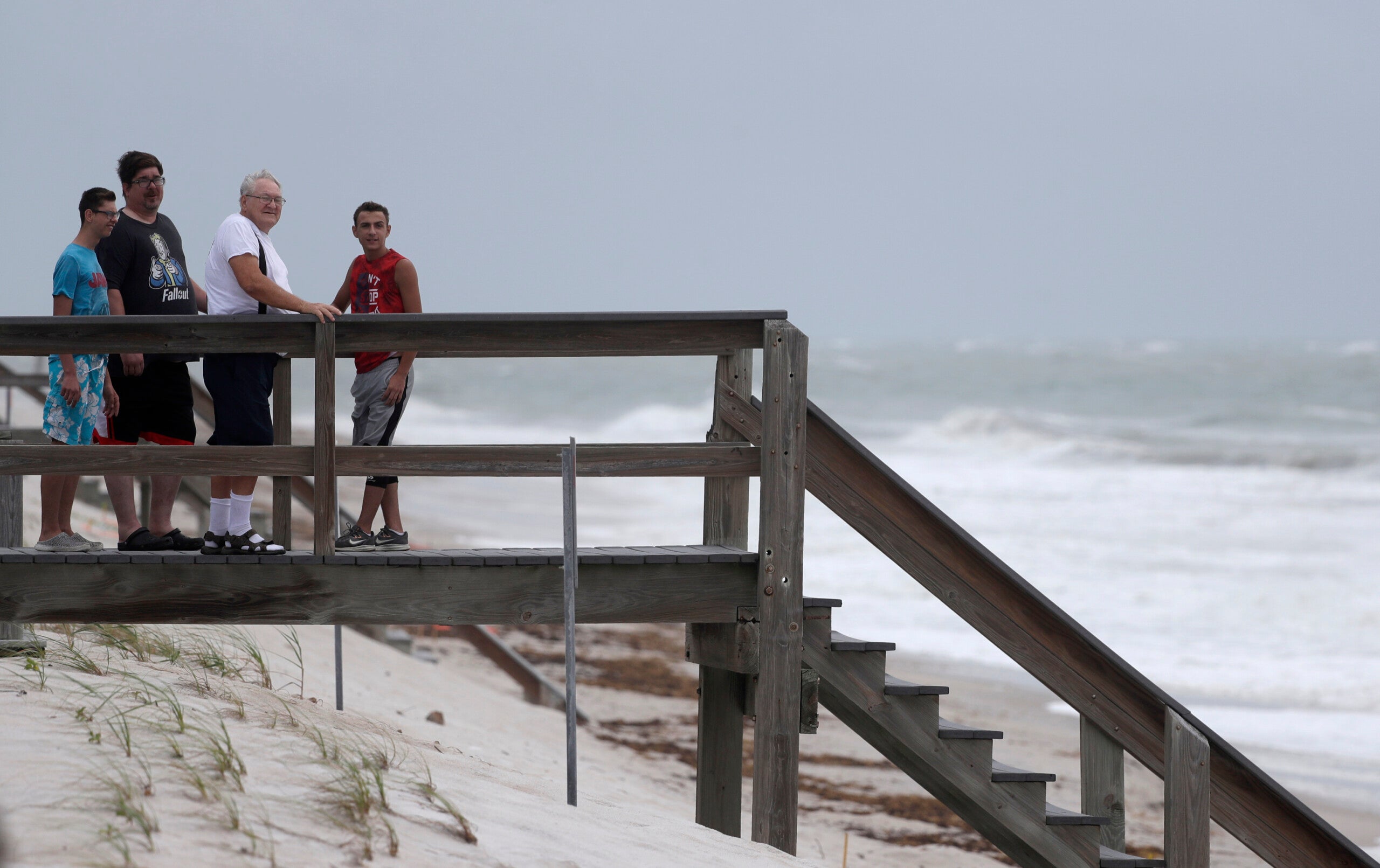 Isaias was downgraded from a hurricane to a tropical storm Saturday afternoon, but was still threatening to bring heavy rain and flooding as it crawled just off Florida’s Atlantic coast.

“Don’t be fooled by the downgrade,” Florida Gov. Ron DeSantis warned at a news conference after the storm — pronounced ees-ah-EE-ahs — spent hours roughing up the Bahamas.

Upper-level winds took much of the strength out of Isaias, said Stacy Stewart, senior hurricane specialist at the National Hurricane Center in Miami. The storm also slowed down considerably.

“We were expecting a hurricane to develop and it didn’t,” Stewart said Sunday. “It’s a tale of two storms. If you live on the west side of the storm, you didn’t get much. If you live east of the storm, there’s a lot of nasty weather there.”

Florida is on the west side of Isaias.

Authorities closed beaches, parks and virus testing sites, lashing signs to palm trees so they wouldn’t blow away. DeSantis said the state is anticipating power outages and asked residents to have a week’s supply of water, food and medicine on hand. Officials wrestled with how to prepare shelters where people can seek refuge from the storm if necessary, while also safely social distancing to prevent the spread of the virus.

Isaias put another burden on communities already hit by other storms and sickness.

In Palm Beach County, about 150 people were in shelters, said emergency management spokeswoman Lisa De La Rionda. The county has a voluntary evacuation order for those living in mobile or manufactured homes, or those who feel their home can’t withstand winds.

“We don’t anticipate many more evacuations,” she said, adding that the evacuees are physically distant from each other and are wearing masks, due to the virus.

In Indian River County, north of West Palm Beach, Florida, emergency shelters were clearing out Sunday after Isaias was downgraded to a tropical storm.

Officials told TCPalm newspapers that 38 people registered at three schools used as shelters. Those areas now must be cleaned to ensure no traces of the coronavirus remain as teachers and staff report Monday to prepare for the upcoming school year.

No one checked in with COVID-19 symptoms. Temperature checks were done at the door, officials said, and isolation rooms were designated in case anyone came in with symptoms.

The center of the storm was forecast to travel near the state’s eastern coast throughout the day, and fluctuations in strength are possible into Tuesday, forecasters said.

Heavy rain, flooding and high winds could batter much of the East Coast this week as the system is forecast to track up or just off the Atlantic seaboard.

The storm did not affect the successful return of two astronauts aboard the SpaceX Dragon capsule, which splashed down into calm waters in the Gulf of Mexico off the coast of Pensacola. Test pilots Doug Hurley and Bob Behnken rode the capsule back to Earth less than a day after departing the International Space Station and two months after blasting off from Florida.

Isaias already has caused destruction in the Caribbean: On Thursday, before it became a hurricane, it uprooted trees, destroyed crops and homes and caused widespread flooding and small landslides in the Dominican Republic and Puerto Rico. One man died in the Dominican Republic. In Puerto Rico, the National Guard rescued at least 35 people from floods that swept away one woman, whose body was recovered Saturday.

Isaias snapped trees and knocked out power as it blew through the Bahamas on Saturday.

With coronavirus cases surging in Florida recently, the added menace of a storm ratcheted up the anxiety. State-run virus testing sites closed in areas where the storm might hit because the sites are outdoor tents, which could topple in high winds.

Natalie Betancur, stocking up at a grocery in Palm Beach Gardens, said that the storm itself doesn’t cause her a great amount of concern.

“The hurricane is not that serious, but I feel that the public is really panicking because it’s a hurricane and we’re in the middle of a pandemic,” she said.

Meanwhile, officials in the Bahamas opened shelters for people in Abaco island to help those who have been living in temporary structures since Dorian devastated the area, killing at least 70 people in September 2019.