22 dead, many missing after 17 inches of rain in Tennessee 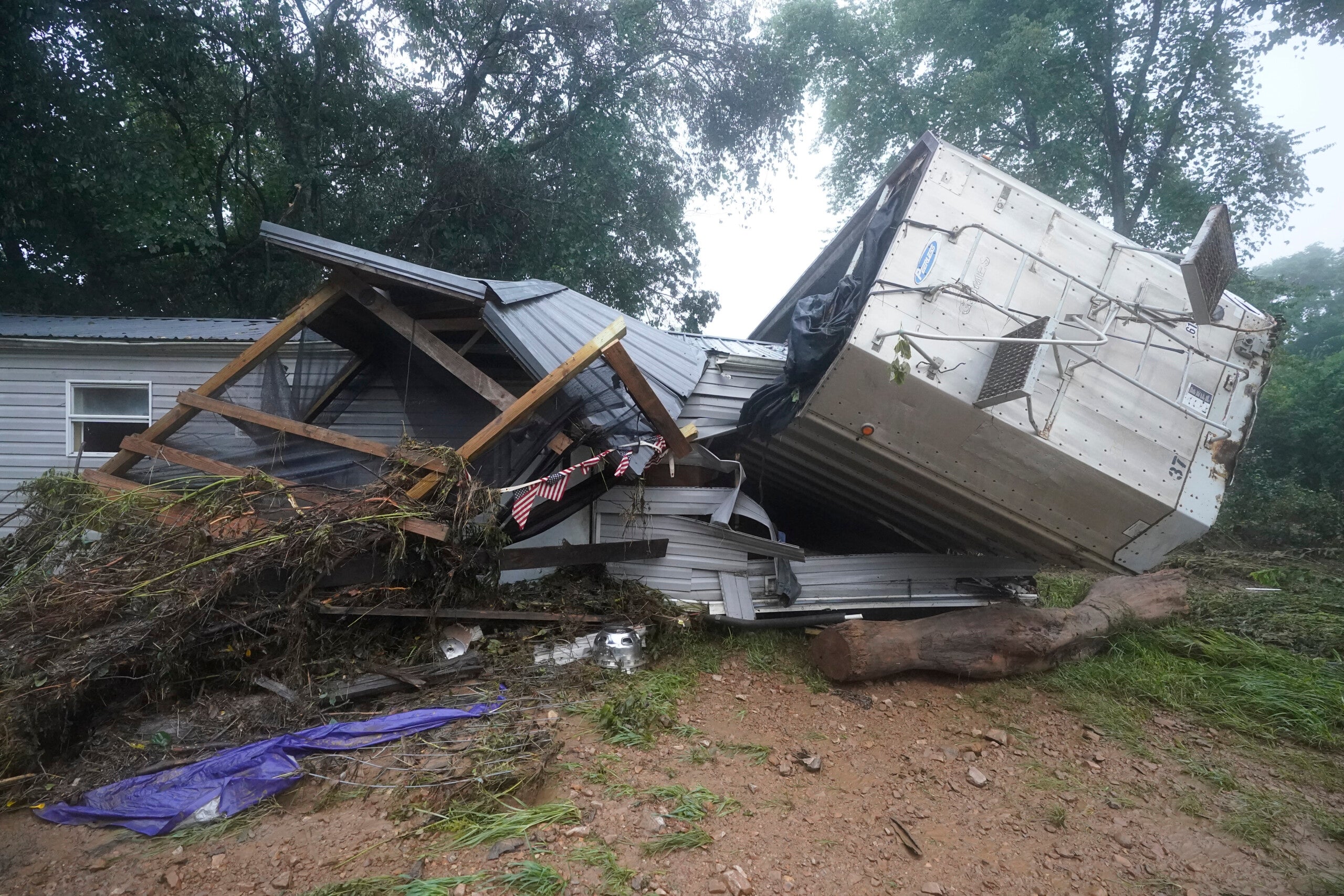 A mobile home and a truck trailer sit near a creek Sunday, Aug. 22, 2021, after they were washed away by flood waters the day before in McEwen, Tenn. Heavy rains caused flooding in Middle Tennessee and have resulted in multiple deaths as homes and rural roads were washed away. (AP Photo/Mark Humphrey)
by: JONATHAN MATTISE and JEFFREY COLLINS Associated Press
Posted: Aug 22, 2021 / 12:05 PM EST / Updated: Aug 22, 2021 / 05:46 PM EST

Saturday’s flooding in rural areas took out roads, cellphone towers and telephone lines, leaving families uncertain about whether their loved ones survived the unprecedented deluge. Emergency workers were searching door to door, said Kristi Brown, a coordinator for health and safety supervisor with Humphreys County Schools.

Many of the missing live in the neighborhoods where the water rose the fastest, Humphreys County Sheriff Chris Davis said. Their names were on a board in the county’s emergency center and listed on a city department’s Facebook page.

The dead included twin toddlers who were swept from their father’s arms, according to surviving family members, and a foreman at county music star Loretta Lynn’s ranch. The sheriff of the county of about 18,000 people some 60 miles (96 kilometers) west of Nashville said he lost one of his best friends.

Up to 17 inches (43 centimeters) of rain fell in Humphreys County in less than 24 hours Saturday, appearing to shatter the Tennessee record for one-day rainfall by more than 3 inches (8 centimeters), the National Weather Service said.

Tennessee Gov. Bill Lee toured the area, stopping on Main Street in Waverly where some homes were washed off their foundations and people were sifting though their water-logged possessions. All around the county were debris from wrecked cars, demolished businesses and homes and a chaotic, tangled mix of the things inside.

Shirley Foster cried as the governor walked up. She said she just learned a friend from her church was dead.

“I thought I was over the shock of all this. I’m just tore up over my friend. My house is nothing, but my friend is gone,” Foster told the governor.

The hardest-hit areas saw double the rain that area of Middle Tennessee had in the previous worst-case scenario for flooding, meteorologists said. Lines of storms moved over the area for hours, wringing out a record amount of moisture — a scenario scientists have warned may be more common because of global warming.

The downpours rapidly turned the creeks that run behind backyards and through downtown Waverly into raging rapids. Business owner Kansas Klein stood on a bridge Saturday in the town of 4,500 people and saw two girls who were holding on to a puppy and clinging to a wooden board sweep past, the current too fast for anyone to grab them. He hadn’t found out what happened to them.

Not far from the bridge, Klein told The Associated Press by phone that dozens of buildings in a low-income housing area known as Brookside appeared to have borne the brunt of the flash flood from Trent Creek.

“It was devastating: buildings were knocked down, half of them were destroyed,” Klein said. “People were pulling out bodies of people who had drowned and didn’t make it out.”

The Humphreys County Sheriff Office Facebook page filled with people looking fo r missing friends and family. GoFundMe pages were made asking for help for funeral expenses for the dead, including 7-month-old twins yanked from their father’s arms as they tried to escape.

“He’s out at his barn and next thing you know, he goes from checking animals in the barn to hanging on in the barn to people seeing him floating down the creek. And that’s how fast it had come up,” the sheriff said.

A photo taken by someone at the ranch showed Spears in a cowboy hat clinging to a pillar in brown, churning water up to his chest.

“Wayne’s just one of those guys, he just does everything for everybody, if there’s a job to do,” said his friend Michael Pate, who met Spears at the ranch 15 years ago.

At the Cash Saver grocery in in Waverly, employees stood on desks, registers and a flower rack as the waters from the creek that’s usually 400 feet (120 meters) from the store rushed in after devastating the low income housing next door. At one point, they tried to break through the celling into the attic and couldn’t, store co-owner David Hensley said.

The flood waters stopped rising as fast just as the situation was getting dire and a rescue boat came by. “We told him that if there’s somebody else out there you can get, go get them, we think we’re OK,” Hensley said.

At the beginning of a news conference on Tropical Storm Henri’s impact on New England, President Joe Biden offered condolences to the people of Tennessee and directed federal disaster officials to talk with the governor and offer assistance.

Just to the east of Waverly, the town of McEwen was pummeled Saturday with 17.02 inches (43.2 centimeters) of rain, smashing the state’s 24-hour record of 13.6 inches (34.5 centimeters) from 1982, according to the National Weather Service in Nashville, though Saturday’s numbers would have to be confirmed.

A flash flood watch was issued for the area before the rain started, with forecasters saying 4 to 6 inches (10 to 15 centimeters) of rain was possible. The worst storm recorded in this area of Middle Tennessee only dropped 9 inches (23 centimeters) of rain, said Krissy Hurley, a weather service meteorologist in Nashville.

“Forecasting almost a record is something we don’t do very often,” Hurley said. “Double the amount we’ve ever seen was almost unfathomable.”

Recent scientific research has determined that extreme rain events will become more frequent because of man-made climate change. Hurley said it is impossible to know its exact role in Saturday’s flood, but noted in the past year her office dealt with floods that used to be expected maybe once every 100 years in September south of Nashville and in March closer to the city.

“We had an incredible amount of water in the atmosphere,” Hurley said of Saturday’s flooding. “Thunderstorms developed and moved across the same area over and over and over.”

The problem isn’t limited to Tennessee. A federal study found man-made climate change doubles the chances of the types of heavy downpours that in August 2016 dumped 26 inches (66 centimeters) of rain around Baton Rouge, Louisiana. Those floods killed at least 13 people and damaged 150,000 homes. 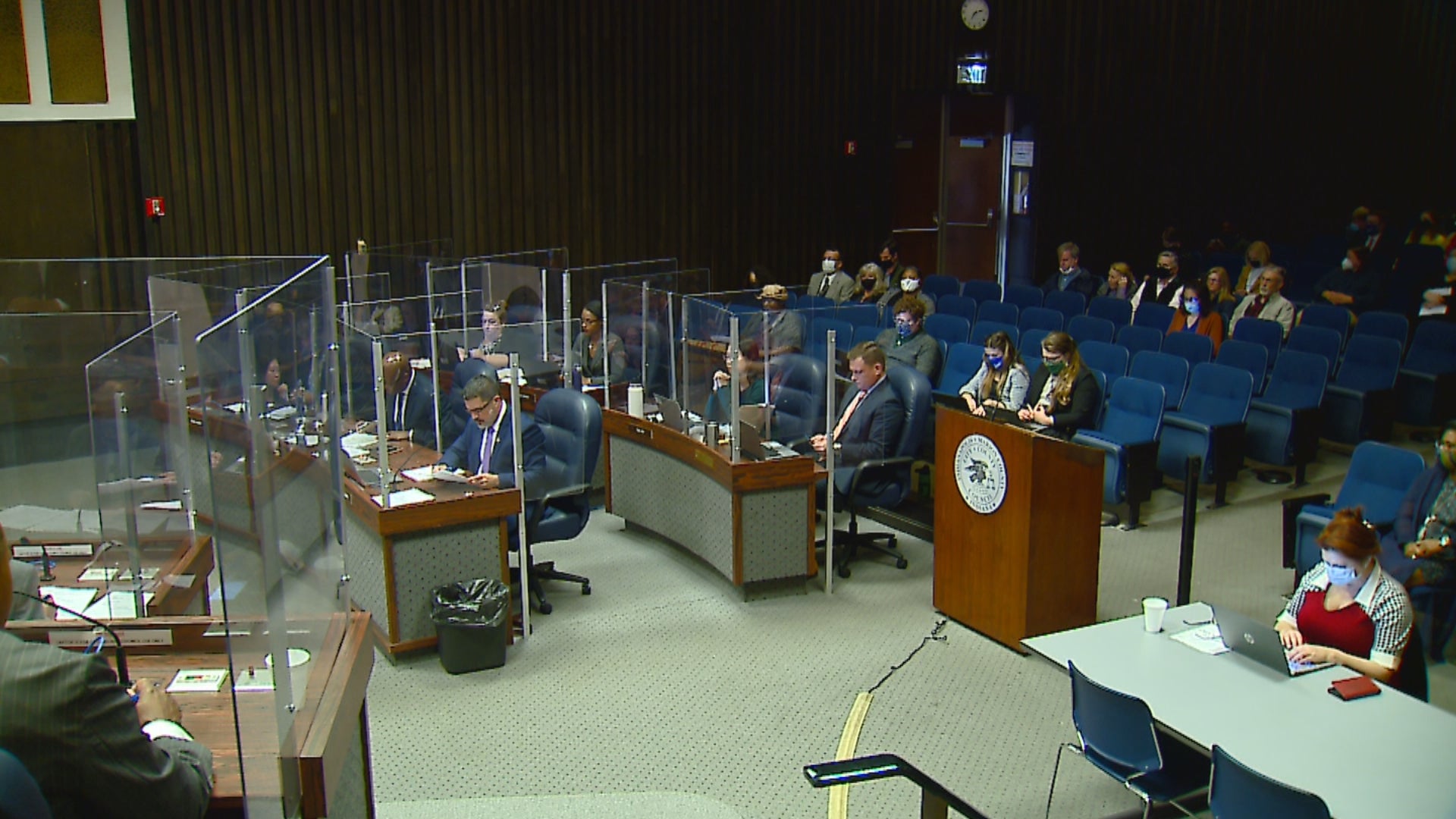