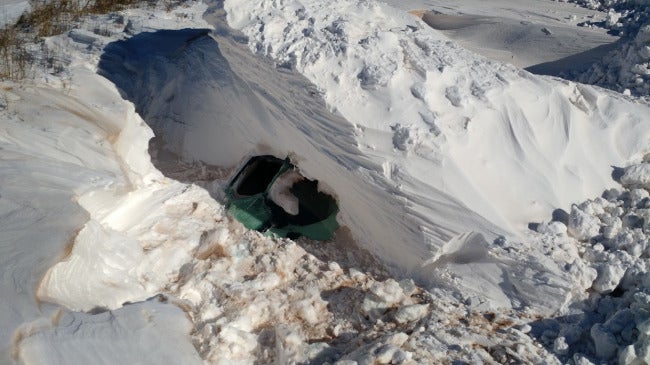 CLOVIS, N.M. (KRQE) – A New Mexico couple, trapped in their car for nearly 20 hours and buried under 12 feet of snow hoped the people on the outside wouldn’t give up.

Betty and Jimmy Anderson said it was a close call.

“We were battling a lot of tough odds,” Jimmy said.

The couple left their Clovis home Saturday morning to make newspaper deliveries, but what they didn’t know is they wouldn’t make it back…at least that day.

“We chose to do our county run and I got maybe five papers out before I decided we were going to turn around and go home,” Jimmy said.

The couple was right in the middle of the storm that slammed most of the counties in eastern New Mexico.

“I got about two-tenths of a mile and we just wound up in a ditch because I couldn’t see nothing,” he said.

The two dialed 911 and were connected with city worker, Bill Kshir, who would stay in contact with them for nearly next 20 hours. Listen to excerpts of the 911 calls:

Kshir let the couple know a crew was on the way, but crews across the county were having trouble making it down county roads. While Kshir was on the phone with the crew out searching for the couple, he also had Jimmy on another line trying to coordinate where to send searchers.

At one point, the bulldozer ends up on top of the Anderson’s car.

“All of a sudden we heard the rumbling of the bulldozer and I’m pretty sure it was the blade that hit the back windshield, Jimmy said. “It seemed as if he was running over us and we looked at each other and said, ‘The snow isn’t going to kill us, this bulldozer is.”

The crew ends up having to leave to get more help and more equipment.

The couple remained calm, but they were starting to worry as the hours grew into the night.

After hours of searching for the second time, Kshir noticed glass on the ground from the broken window. Kshir and another volunteer, Ty Gonser, who works for Ray Lee Equipment, started to clear some of the snow from the car, enough to break a window and get the couple out.

“They looked in and seen both of us huddled together,” Jimmy said. “The rest was just beautiful.”