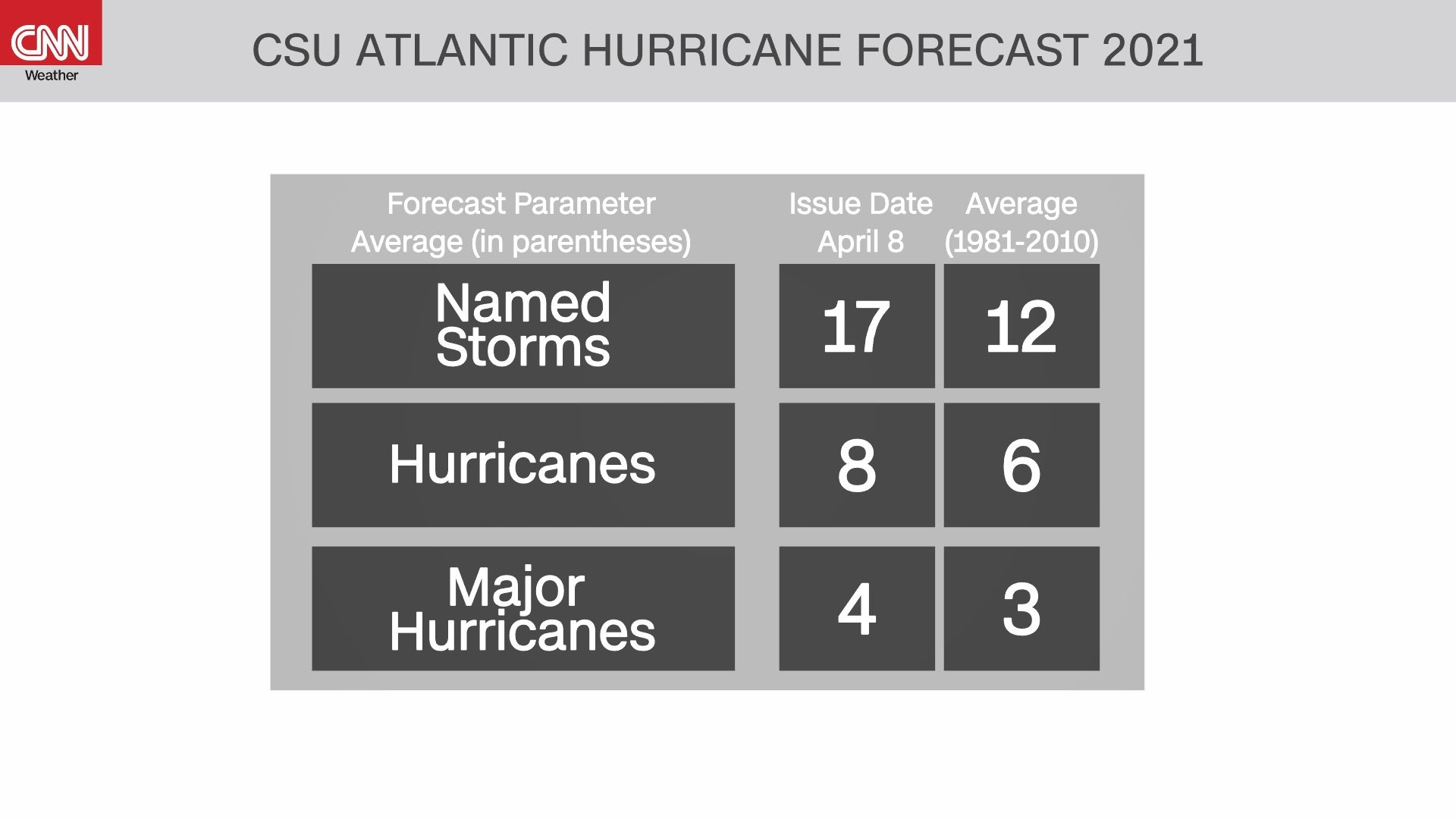 However, seasonal averages are in the process of being updated, according to Ken Graham, director of the National Hurricane Center (NHC).

“We will have those new averages going into the season. In fact, over the next couple of weeks we are going to release that information,” Graham says.

CSU is one of many academic institutions, government agencies and private forecasting companies putting out seasonal projections.

Even though the official forecast from the National Oceanic and Atmospheric Administration (NOAA) won’t come until the end of May, there is already a strong consensus that the Atlantic is headed for yet another active season.

There is considerable warmth across much of the eastern Atlantic where the ocean’s surface temperature is 1-3 degrees Celsius above normal for early April.

“The primary reasons why we’re going above average is the low likelihood of a significant El Niño event and the relative warmth in the tropical (Atlantic) but especially the subtropical eastern Atlantic,” said Phil Klotzbach, a research scientist at CSU.

Sea surface temperatures are one of the ingredients needed to fuel hurricanes, so it makes sense that there would be a correlation between those temperatures and an active season.

Another big factor is El Niño, or the lack thereof. When El Niño is present, it reduces Atlantic hurricane activity due to increased vertical wind shear — changes in wind speed and direction that prevent hurricanes from forming.

Most dynamical and statistical models are currently indicating low chances of El Niño developing between August and October.

“The current odds of El Niño from NOAA are quite low for August-October (10%),” according to Klotzbach.

Average conditions or even La Niña conditions create a more favorable environment for tropical storm development. While we are coming off an active La Niña pattern, according to NOAA it is not entirely over yet.

So, for the moment, El Niño’s calming effect on Atlantic hurricane season does not seem likely for 2021.

Changes to hurricane season are coming

The 2020 Atlantic hurricane season finished with a total of 30 named storms — the most in any year on record. People along the coastline from Texas to Maine were affected by at least one named storm that season. But the post-season brought about some significant changes, including the retirement of three individual storm names, as well as the entire list of back up names.

Before 2021, if the hurricane season used up all the names on the predetermined alphabetical list, the next plan of action was to use the Greek alphabet.

“The Greek alphabet will not be used in the future because it creates a distraction from the communication of hazard and storm warnings and is potentially confusing,” the WMO announced in March.

It was decided that a separate list of names would be used as a backup.

The Greek alphabet will be replaced by a supplemental list of names using the same rules as the main Atlantic hurricane season naming list — a list of names A-Z, but excluding the letters Q, U, X, Y, and Z — for if and when the initial list of names has been exhausted.

This will allow for the supplemental list of names to be more easily retired and replaced when the need arises.

Climatologically, about 30% of all Atlantic hurricanes make U.S. landfall. However, you don’t need to have all of the 17 forecast storms make landfall in the US for it to be an impactful season.

“It doesn’t matter if there’s 30 storms or one … if it impacts you, it’s a busy season,” Graham says.

The National Hurricane Center (NHC) is already beginning its preparations for this year’s season. This year, the center will be releasing their Atlantic outlook products beginning May 15 as opposed to June 1, in order to better serve the communities impacted by early-season tropical systems.

Seven out of the last 10 years have seen tropical systems form prior to the official start of hurricane season, which is June 1.

In the off-season, the NHC has also improved its storm surge modeling.

“We have some new storm surge modeling that we’re really excited about,” says Graham. “I think it’s really going to improve our ability to get that information out for evacuations based on storm surge, even earlier than ever.”

This is very important because Graham points out that historically storm surge is the deadliest part of tropical systems. In addition, storm surge forecasts tend to be the main driver for evacuation plans along the coast.

“The best part, in some cases where we’re real confident, we’re going to go from 48 hours getting that information out, which we do now, we’re going to expand that out to 60 hours,” Graham said. “That is a big deal for decision-makers in helping them make those really tough decisions whether to evacuate or not.”

The NHC’s official hurricane forecast will be released in May and “It looks like we’re trending toward an average to above-average once again,” says Graham.