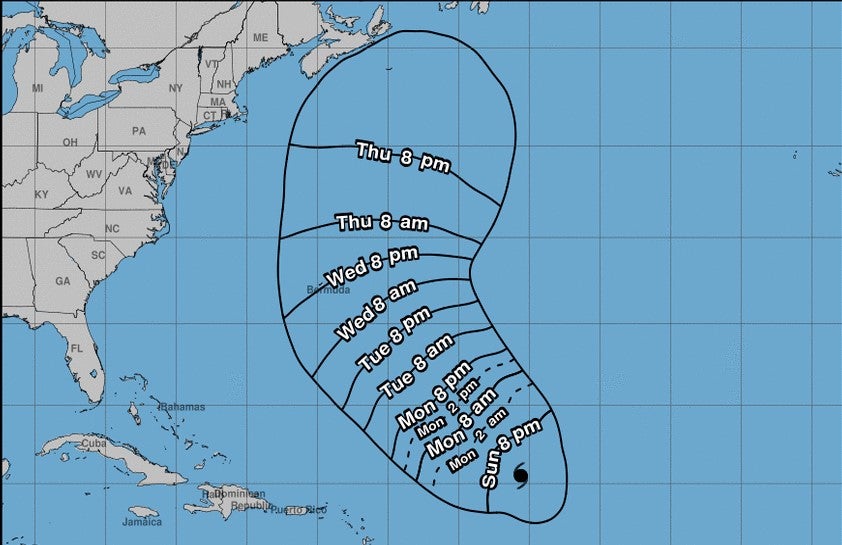 (CNN) — As millions pick up the pieces after Hurricane Ida ravaged the eastern United States from the Gulf Coast to the Northeast, meteorologists are keeping an eye on Hurricane Larry in the Atlantic.

While Ida was generating its 1,500-mile path of destruction, Tropical Storm Julian and Tropical Storm Kate formed and dissipated in the last week. But now, Hurricane Larry is now churning in the central Atlantic.

On Friday night, Larry intensified to a Category 3 hurricane with maximum sustained winds of 115 mph, according to the National Hurricane Center. The storm’s winds were up to 125 mph as of the 5 p.m. ET Sunday update from the center.

That makes Larry the third major hurricane — Category 3 or higher — in the Atlantic basin this hurricane season.

Larry, tracking to the north and west over the open Atlantic, will not be a direct threat to any land for at least the next few days.

As of late Sunday afternoon, the storm was in the eastern Atlantic Ocean about 830 miles east of the Leeward Islands and 1,195 miles southeast of Bermuda.

Larry should gradually turn to the northwest after Labor Day, and the storm could approach Bermuda, still as a major hurricane, by Thursday. However, the forecast track that far out is uncertain.

Larry is not expected to have a direct threat on the United States but could cause large waves and dangerous rip currents along the East Coast by late next week.

“Significant swells will likely reach the eastern United States coastline after Labor Day. These swells are likely to cause life-threatening surf and rip current conditions,” the hurricane center said.

The hurricane center also warns that “swells generated by Larry are expected to reach the Lesser Antilles on Sunday.” The center adds that swells are likely to cause life-threatening surf and rip current conditions.

Long-range forecast models show Larry continuing toward Bermuda and passing east of the island sometime mid to late next week. There was increasing disagreement in the models on how close the storm will get to Bermuda.