Hurricane Larry will produce 2-4 feet of snow in Greenland 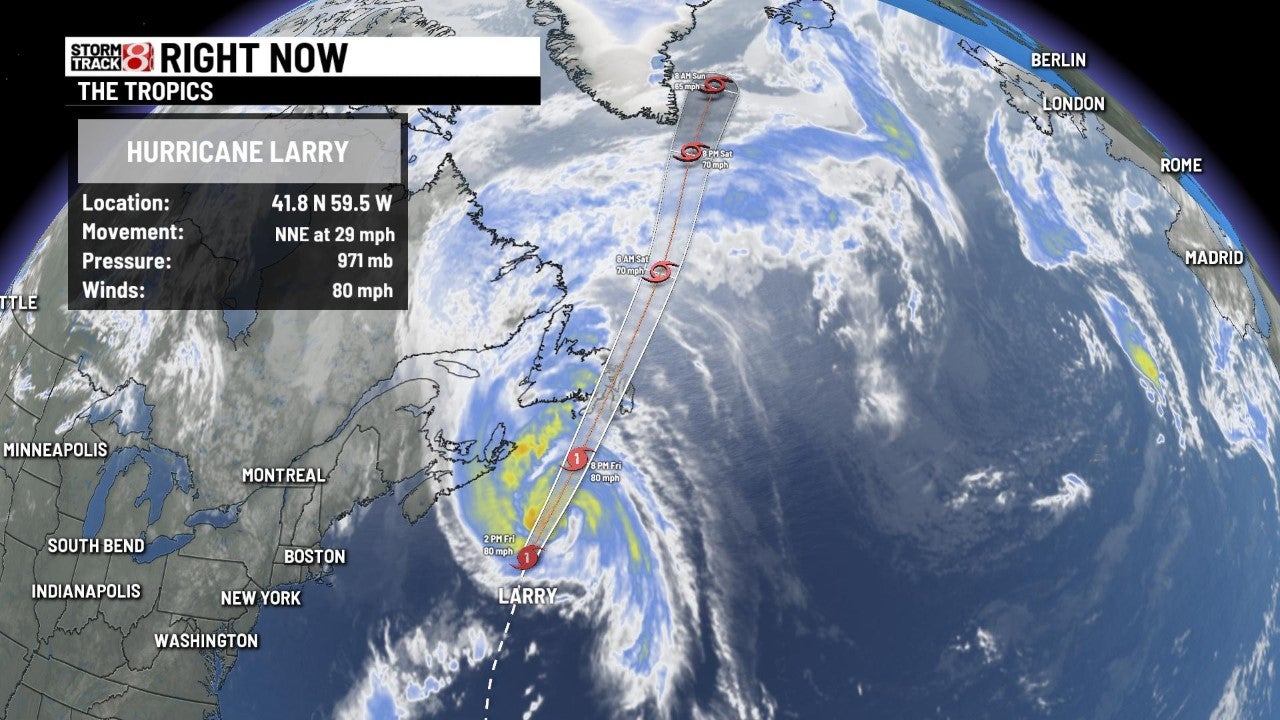 (CNN) — Friday is the statistical peak of hurricane season, yet a monster named Larry is forecast to transform into a winter storm that will deliver feet of snow in Greenland.

Yes, you read that correctly. A hurricane producing feet of snow. It’s been a crazy year for tropical systems already, so why not?

This year is already ahead of pace in terms of storms, with 13 named. On average, we don’t see 13 named storms until the end of the season.

Hurricane-force winds are not uncommon in Greenland, but hurricanes that bring significant snow are.

Feet of snow for Greenland

Hurricane Larry is forecast to slide up the east coast of Greenland this weekend. When it gets there, it will have sustained winds around 60 to 70 mph, with gusts as high as 85 mph. Larry’s hurricane-force wind likely will produce blizzard conditions across Greenland, although Larry might lose the tropical aspects of a hurricane by then.

“Larry should become an extratropical cyclone on Saturday, and is now forecast to be absorbed by a larger extratropical low near Greenland by the end of the weekend,” the National Hurricane Center says.

The term extratropical has to do with the storm’s core. A hurricane has a warm core, while an extratropical (or post-tropical) has a cold core.

As Larry interacts with this other system, it will be able to pull in a tremendous amount of moisture leading to significant snowfall in Greenland.

Widespread totals of 12 to 18 inches are expected in the eastern half of the island nation. Higher elevations along the east coast could get 2 to 4 feet or higher.

While it is rare for tropical systems to help trigger snow, it’s not unheard of. In fact, just last year Hurricane Zeta brought snow to the Northeast US, including several inches to Massachusetts.

What makes Larry a bit more unusual is the timing. Zeta hit in late October. So did Superstorm Sandy, which also helped produce snowfall in October 2012.

Landfall as a hurricane in Canada first

In the short term, Larry will bring affect the US and Canada before Greenland.

“Significant swells from Larry will continue affecting Bermuda, the east coast of the United States, and Atlantic Canada through Saturday. These swells are likely to cause life-threatening surf and rip current conditions.” said the National Hurricane Center.

While Larry is expected to gradually weaken Friday as it moves through the colder waters of the northern Atlantic, it is still expected to retain hurricane strength until it passes Newfoundland.

“These winds will likely topple some trees (leading to downed utility lines), damage signs and cause some property damage to roofing materials, cladding, fences and exterior fixtures,” the Canadian Hurricane Centre cautioned. “Secure loose objects on your property and anticipate power interruptions.”

Canada is no stranger to systems that undergo the post-tropical or extratropical transition but still produce hurricane-force winds. In September 2019, Hurricane Dorian made landfall in the Canadian Maritimes as a Category 1-equivalent extratropical storm.

What makes Larry interesting is that it may be able to make landfall in Canada before transitioning to extratropical. Landfall is expected late Friday night or early Saturday morning in Newfoundland and Labrador. It is forecast to be a Category 1 hurricane.

Larry is a large hurricane with hurricane-force winds extending outward up to 90 miles from the center. Even after it transitions to extratropical, Larry is expected to stay big in size.