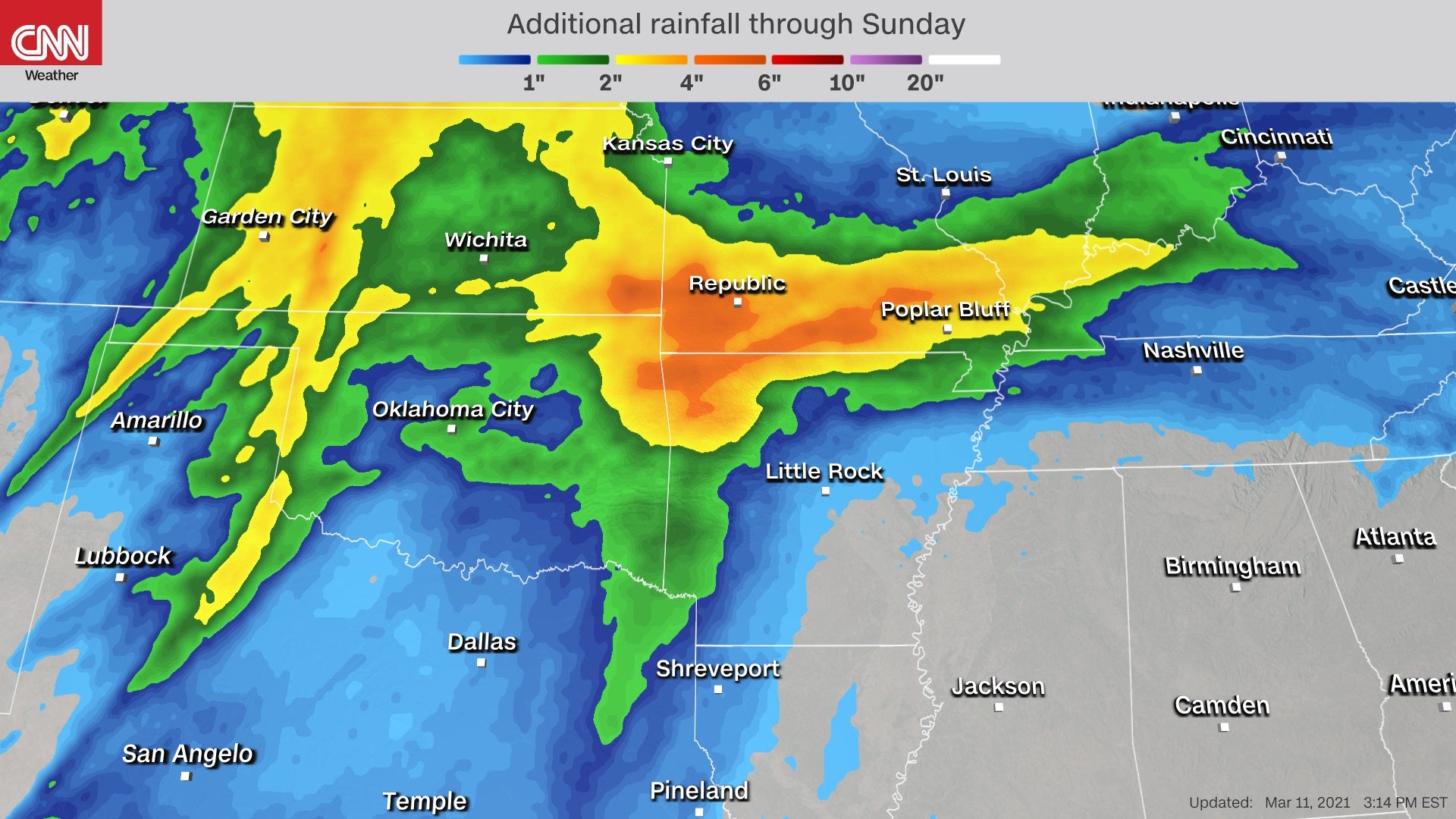 (CNN) — Severe weather, historic snowfall and flash flooding are forecast for the next few days in areas of the central United States, from the Rockies to the Mississippi River Valley.

“The stage is set for a significant winter storm to impact the central Rockies and the central High Plains,” the Weather Prediction Center said Friday morning.

This storm system delivers its first threat over the Rockies, as intense bands of snowfall will dump feet of powder across Colorado and Wyoming.

Dangerous travel conditions will exist across portions of interstates 25, 70, and 80 — so drivers are urged to use extreme caution.

This slow-moving system could produce the biggest snowfall in decades for the eastern Rockies and western Plains through the weekend.

But that’s just one side of the system. Its south and eastern sides — which will be pulling in warm, moist air from the Gulf of Mexico — will be fueling several days of severe storms, with the possibility of tornadoes.

Nearly 20 million people will be under the threat of severe storms at some point Friday through Sunday across half a dozen states with damaging winds, large hail, and tornadoes.

In addition to all that, the cold front will eventually stall across the southern Plains, resulting in heavy rain over much of the same region throughout the next couple of days, leading to flooding.

Here is what to expect and when.

A few snow showers may be possible during the day Friday across parts of Colorado and Wyoming. The snow showers will then become more prevalent Friday night.

Snow bands will become more frequent across Colorado and Wyoming and travel conditions will begin to deteriorate overnight.

While there are still some uncertainties at play, the general message from the NWS office in Boulder, Colorado, is for 1 to 3 feet of snow for much of their forecast area.

Intense snowfall accumulations also are predicted in eastern Wyoming, western Nebraska and parts of southern South Dakota. Those places will likely see over a foot of snow through the weekend.

A severe threat is also expected to develop Friday across parts of western Texas and western Oklahoma.

“A cluster of strong to severe storms with embedded supercells is forecast to move northeastward from the vicinity of Lubbock into the southeastern Texas Panhandle during the early to mid-evening,” said the Storm Prediction Center. “In addition to large hail, wind damage will also be a possibility with the stronger cells within this cluster.

Both the severe and snow sides of this system will intensify further during the weekend.

By Saturday, it will be snowing intensely along the Front Range of the Rockies and moving into the western Plains.

This area is no stranger to March snowfalls. In fact, March is actually the snowiest month of the year for portions of Colorado and Wyoming. In Denver, each of the top 10 March snowstorms totals over a foot of snow. This year could be added to that list.

Travel will also be very difficult Saturday. Whiteout conditions will lead to very low visibility and causing poor driving conditions. People are urged to stay home if they can.

The severe storm threat also begins to increase today. The areas with the greatest threat for severe weather Saturday will be Oklahoma City and Tulsa; Abilene, Texas; and Wichita, Kansas.

The threats factors remain the same as Friday: damaging winds, large hail and isolated tornadoes. The difference is the location and intensity of the storms. The system — slowly — shifts to the east.

The timeline for best severe chances looks to be in the afternoon and early evening. While some of the severe storm threat does decrease overnight, it will not diminish entirely. Power outages are possible.

There is still some uncertainty over whether all necessary ingredients will be present for robust severe weather, particularly across Texas, Oklahoma and Arkansas on Saturday and Sunday.

Dangerous weather will continue into Sunday, with heavy snow and potential blizzard conditions forecast across portions of the Rocky Mountains and central Plains.

“In addition, increasingly strong and gusty winds are expected to accompany the heavy snow by Sunday as the storm system is forecast to intensify more rapidly,” the WPC says.

Drivers are still urged to take caution as roadways are still expected to be very dangerous.

See if your area could see severe weather

While the snow may begin to slow towards the end of the day, the severe threat certainly does not — it just changes locations.

One thing that could limit severe potential would be cloud cover. That’s because sunshine heats the atmosphere, which helps storms intensify.

The other growing concern for Sunday will be the threat for flooding, particularly across portions of Missouri, Kansas and Illinois, where flood watches already exist.

Other states — such as Arkansas, Oklahoma, Kentucky and Indiana — also could see flooding, especially if multiple storms pass over the same locations.

Widespread rainfall totals through Sunday are expected to be in the 2 to 4 inch range, but some isolated spots could exceed 6 inches.