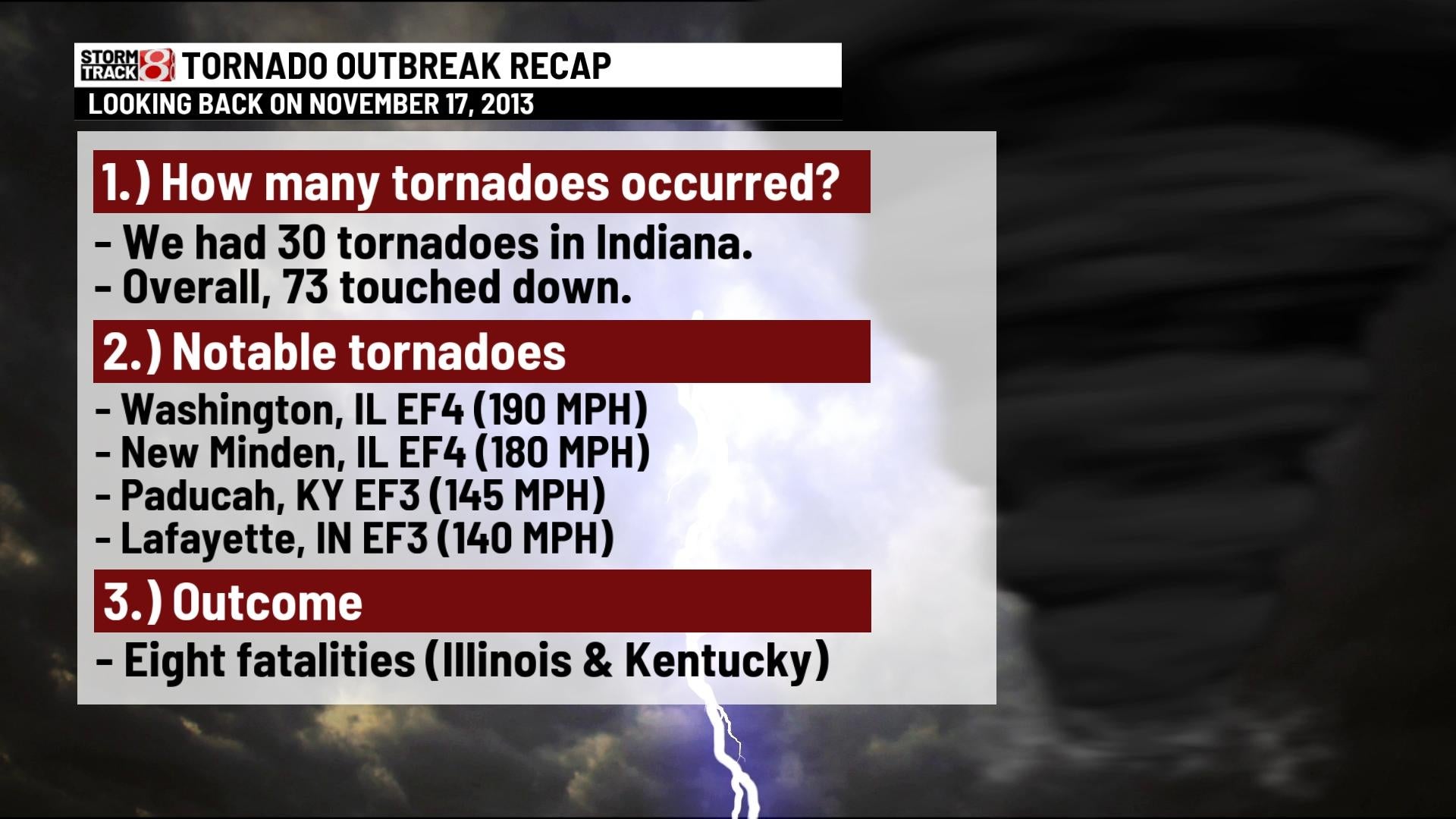 INDIANAPOLIS (WISH) — On this day in 2013, an intense and rare tornado outbreak took place across the midwest and Ohio Valley regions. States such as Illinois and Indiana were hit hard by several significant tornadoes. This day still lives fresh in the minds of those who were heavily impacted on November 17, 2013.

The Fall season is a time in which we make our transition towards colder and more snowy weather as we approach the end of the year. We don’t typically think about how the weather can change on a dime in this season. However, the glaring fact with this is that we have a decent track record of significant severe weather in the fall. November especially can see wild changes in the weather and we always have to be on guard whenever things quickly develop.

Sunday, November 17, 2013 proved to be one of those days in which conditions quickly deteriorated and made a historical mark on the midwest and Ohio Valley.

The overall setup for this event was well anticipated by forecaster days in advance. We had a powerful system that was pulling in warm and moist air, and the winds aloft were exceptionally intense. Temperatures would rise into the upper 60s across portions of Indiana before a strong cold front steered in. Once this front progressed into the region, things took off in a hurry.

Indiana was under a High risk for severe weather, which is the highest severe risk you can get. At 11:20 AM EST, all of central and much of northern Indiana was placed under a rare “Particularly Dangerous Situation” Tornado Watch. The watch mentioned that several intense tornadoes were likely.

The first tornado in Indiana touched down just before 2:30 PM EST and would hit portions of Vermillion and Warren counties. Tornadic activity would quickly ramp up over the next two hours. The strongest tornado of the day would touch down before 3 PM EST southeast of Lafayette. This tornado would produce EF3 damage near Lafayette and travel through parts of Carroll and Cass counties. Additional strong tornadoes in Indiana would occur near Veedersburg, Otterbein, Vincennes, Kokomo, and Washington. Thankfully, there were no fatalities in Indiana.

Other areas were not as lucky unfortunately. The strongest tornadoes of the entire outbreak would take place in Washington, IL and New Mindon, IL. Both of these tornadoes were rated EF4 in which they caused absolute devastation and a few fatalities. Another damaging and deadly tornado would form in far southern Illinois and hovered around the Ohio river during its life span. The northern sections of Paducah, KY took a significant hit from this EF3 tornado as it was heavily rain-wrapped.

By the end of the day, a total of 73 tornadoes touched down across the midwest and Ohio Valley. Indiana saw 30 of these tornadoes in what is still the state’s second largest tornado outbreak on record. This is also Indiana’s largest November outbreak on record as well.

This outbreak is an important reminder that severe weather can happen at any point in the year. We don’t usually think about it when it is the fall or winter season especially. It is vitally important to keep your guard up if conditions are forecasted to go downhill. Never assume tornadoes can’t happen in Indiana in only specific months of the year.