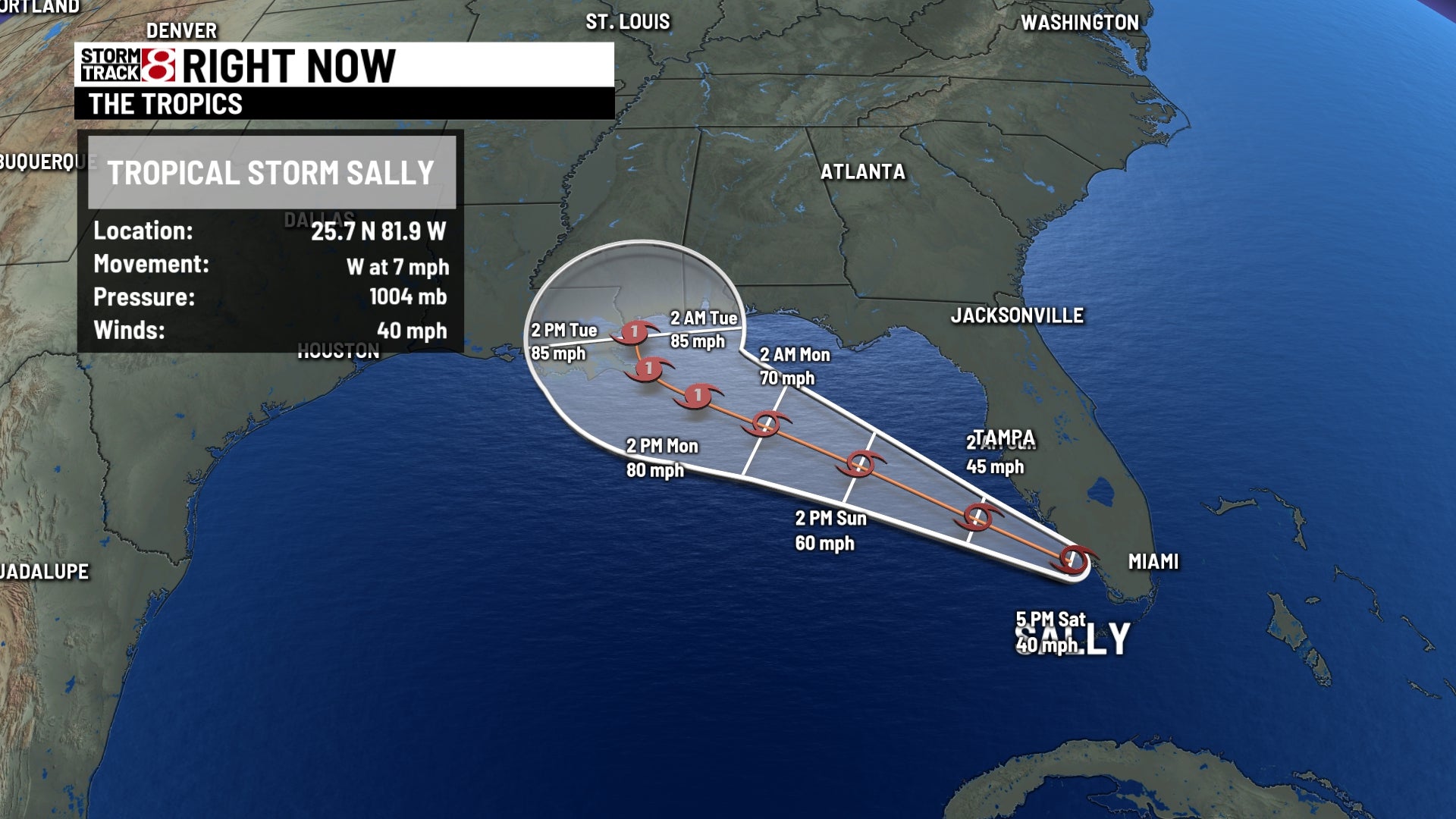 Sally — also the earliest 18th named storm on record — has already brought heavy rain and gusty winds to Florida Saturday as the storm moved into the Gulf of Mexico on Saturday.

Flood watches are in effect through Sunday for areas of Florida’s west coast including Tampa, Bradenton, Port Charlotte and Fort Myers. In these areas, 2 to 4 inches of rain is expected through the weekend.

Hurricane Watches and Tropical Storm Watches have already been issued along the Gulf Coast from Louisiana through the panhandle of Florida.

“While we ultimately don’t know where Sally will make landfall, much of Southeast Louisiana is in the storm’s cone and the risk of tropical storm force or hurricane strength winds continues to increase. This storm has the potential to be very serious,” Edwards said in a news release.

In New Orleans, Mayor LaToya Cantrell issued a mandatory evacuation order for residents outside of the city’s levee protection system. The evacuation will begin Sunday at 6 p.m. for the areas of Venetian Isles, Irish Bayou and Lake Catherine.

Most forecast models have Sally moving toward the northern Gulf Coast and likely making landfall somewhere between New Orleans and Panama City by late Monday or Tuesday, however if the track shifts farther west or slows down, landfall may hold off until Wednesday.

“The cyclone will likely become a hurricane in 2 to 3 days, although an increase in vertical shear could slow the rate of intensification over the northern Gulf of Mexico,” according to the National Hurricane Center.

Once it reaches that area of the Gulf Coast the steering patterns break down and the system meanders near the coast.

Whether the meandering is offshore prior to a landfall or onshore will not make much of a difference in terms of rainfall. In either case, because of the slow forward movement along the Gulf Coast significant flooding is possible.

As of right now, widespread rainfall accumulations of 4 to 6 inches are likely. However, there will be isolated areas right along the coast that could pick up more than a foot of rain.

Another system, Tropical Storm Twenty, has formed in the central tropical Atlantic, according to the NHC. Twenty has sustained winds of 35 mph.

Twenty is expected to strengthen to a tropical storm by tomorrow and a hurricane by next week, and if so, will be named Teddy. The previous record for the earliest 19th named storm is October 4, 2005.

So far this season, we have seen 18 named storms. The average for an entire season is 12. Early in the season, forecasters called for a very active season.

Another system to watch is a broad area of low pressure southwest of the Cape Verde islands. This system is now Tropical Depression 20.After Sally there are only three names left on this year’s official list: Teddy, Vicky, and Wilfred. After that the NHC will move on to using the Greek alphabet.

On Thursday the National Oceanic and Atmospheric Administration announced they are issuing a La Niña Advisory, meaning La Niña conditions are present in the central and eastern Pacific Ocean.

In a typical El Niño phase, much of the Pacific Ocean is characterized by warmer waters, whereas La Niña features a cooling of those same Pacific waters. In the case of hurricanes, La Niña weakens high atmospheric winds, which allows warm air pockets to grow vertically and develop into hurricanes.