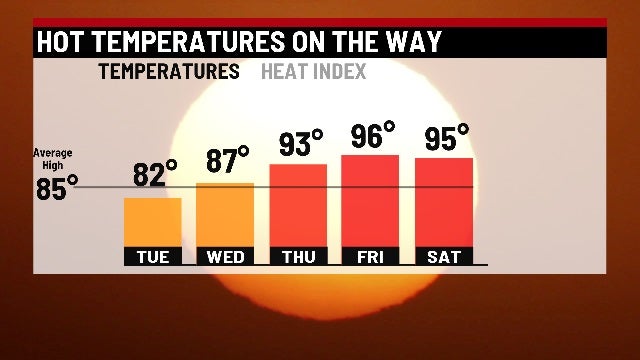 INDIANAPOLIS (WISH) — The remnants of Barry march toward central Indiana, bringing a couple of days of rain chances. The hottest air of the year looks to move in late week.

Remnants of Barry are in sight here in central Indiana, with a few areas already seeing light, but steady showers in the southern potions of the state. That said, as the system slowly moves northeast, we’ll likely only see isolated showers and storms across the area for the late night and overnight hours – so again, rain chances will be few and far between, at least for tonight.

Lows only fall to the lower 70s.

While severe weather is not a high concern, we can’t rule out a few rotating storms due to the nature of the system. Something to keep an eye on, especially with peak instability in the afternoon.

Rain chances should remain pretty high well into the evening, and will fizzle off to isolated showers into the overnight.

Widespread rainfall amounts of 0.50″-1.0″ will be common, but isolated areas could do a bit better with several heavy downpours in play.

A brief break for the high heat thanks to the rain, as highs only hit the lower 80s.

Showers and storms from Barry will pull away during the morning. With sunshine returning Wednesday afternoon, temperatures will surge into the upper 80s, which is just the beginning of dangerous heat and humidity settling in.

Highs starting Thursday jump to the middle 90s. With dew points in the 70s, heat indices will likely jump the 105°-110° – certainly hot enough for heat advisories and possibly heat warnings. At least 4-5 days (Thursday -Monday) will include very hot temperatures.