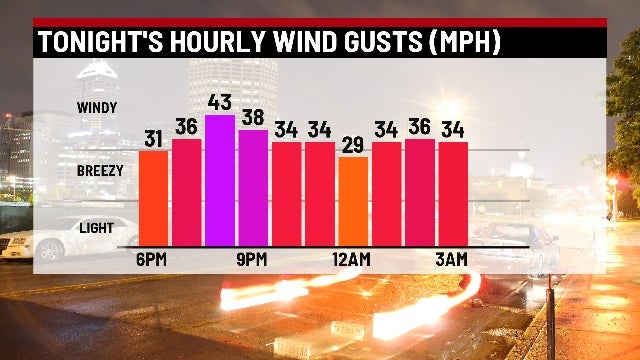 INDIANAPOLIS (WISH)– Steady rain comes to an end on Saturday night, and winds will pick up.

Winds may gust at times close to 40 miles per hour. Temperatures rise into the lower 60s right around midnight before they fall into the upper 40s, close to 50, by early Sunday morning.

SUNDAY: While winds drop off a bit, it’s still going to be breezy. Sustained winds will be between 8 and 15 mph with gusts near 20 early in the day.

Sunday starts off cloudy but dry. Clouds decrease as early as lunchtime bringing lots of sunshine for the afternoon. It’s going to be dry with seasonal temperatures for the Colts game. Highs climb into the lower 60s.

MONDAY: We’ll see a mix of sun and clouds throughout the day Monday. It’s going to be warmer with highs in the low to middle 60s.

8-DAY FORECAST: Clouds begin to increase late Tuesday. There’s a chance for a few showers late Tuesday night, but a better chance of rain comes on Wednesday and Thursday.

Temperatures fall into the low and middle 50s for the middle of the workweek. Colder air moves into the state late on Halloween. It looks like you’ll need a warm costume.

If the cold air arrives fast enough, there may be a few flurries possible late Thursday. We dry out Friday and next weekend, but temperatures fall below freezing in the early morning hours. It looks like the growing season will come to an end.