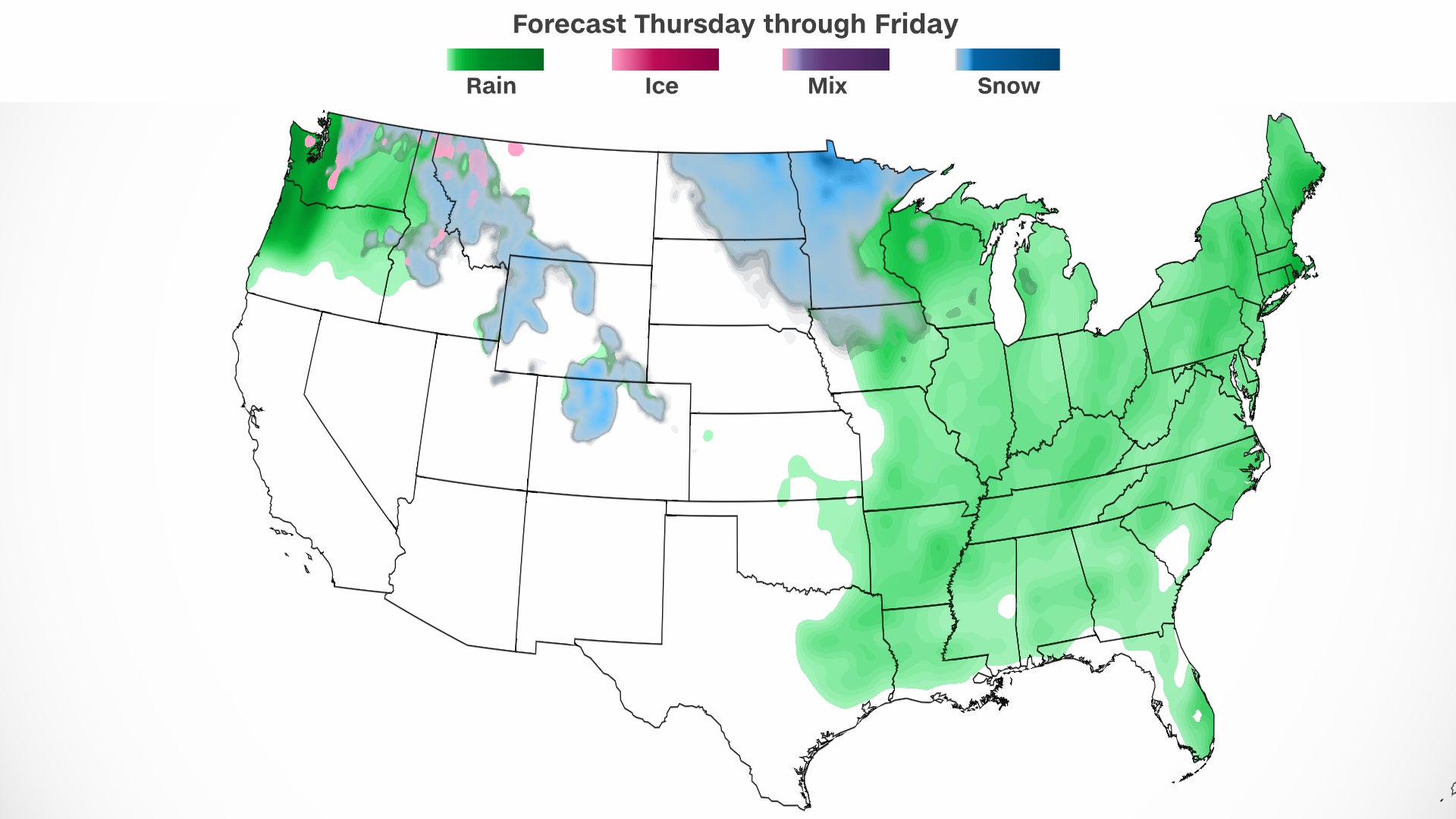 (CNN) — Rain, snow, wind and thunderstorms; this week has it all as autumn and winter battle it out from the Midwest to the East Coast.

The first significant winter storm of the season is on its way for many across the Dakotas and Minnesota, while heavy rain will swing through the Northeast by the early weekend.

This strengthening and wide-ranging weather system will move east from Omaha to New York City.

After a slight risk of severe thunderstorms from Texas to Oklahoma on Wednesday, this developing storm system will usher in enough cold air to create snow further to the north. A snowstorm with significant impacts is forecast across the upper Midwest from Thursday evening into Friday.

A winter storm watch is in effect for northeastern South Dakota where the threat is greatest.

This strengthening storm is forecast to bring near-blizzard conditions to tens of thousands of people across the Dakotas.

Sustained winds of 35 mph or greater are possible, with considerable falling or blowing snow, reducing visibilities under a quarter mile for at least three hours.

This storm could deliver just that as the wind and snow forecast for Friday appears considerable across the Upper Plains. These conditions can be especially hazardous when traveling on the roadways. Plan on driving restrictions along Interstate 29 between Sioux Falls and Fargo by Friday morning.

You may think it’s too early in the season to talk about snow, but if you’re across the upper Midwest, it’s pretty punctual, if not a few days early. Take, for example, Minneapolis/St. Paul, where the first snowfall of 1 inch or greater occurs around November 16. This Friday, November 12, the region could experience “numerous snow showers” that may be “heavy at times,” according to the Twin Cities National Weather Service office.

Snow is likely to blanket the ground with 2 to 5 inches from the eastern Dakotas to central and northern Minnesota as this storm pivots across the region. The heaviest snowfall totals will be found near the border of Canada, where over 6 inches or more is possible.

After the storm gives many their first taste of winter across the upper Midwest, it will continue to expand in size and move slowly eastward. The front half of the low pressure will draw precipitation and milder temperatures northward, allowing the threat for locally heavy rain from the Ohio Valley to New England. Expect a slow commute to and from work on Friday between Cincinnati and Philadelphia.

Rainfall totals will range between 1 to 2 inches through the early weekend, but localized accumulations could reach 2 to 4 inches across southern New England. While temperatures will remain conducive for rain, higher elevations along the Catskills and central Appalachians could see some light snowfall as temperatures hover around freezing.

Temperatures behind the cold front will plummet 15 to 25 degrees by the weekend for many East Coast cities, just enough to remind us that winter is right around the corner.