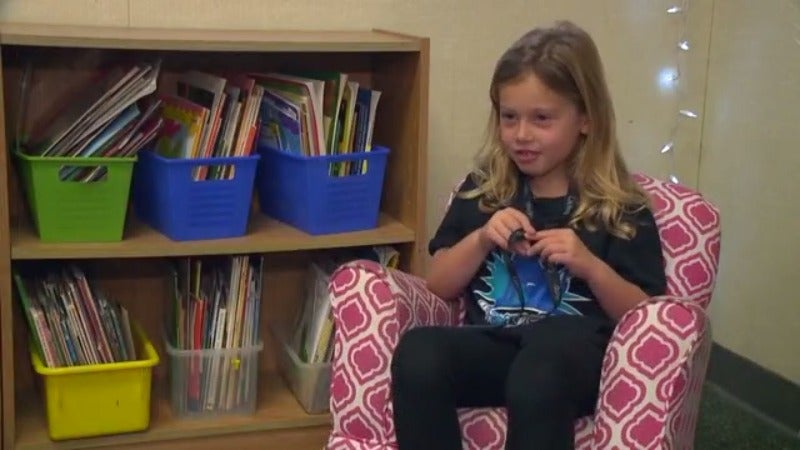 VISTA, Calif. (WISH) — A 5-year-old California girl has a heart filled with compassion for her classmates and a willingness to roll up her sleeves and help.

The little girl sold cookies and hot cocoa to raise money to pay off negative lunch balances at her school.

Coloring in her classroom at Breeze Hill Elementary School, this shy girl has a big heart and a worthy cause.

Katelynn Hardee said she did it so fellow students “can have lunch … and snack.”

Her idea: “I can give give money to the lunch people that don’t have the money.”

She’d overheard another student’s mother saying she was having a hard time paying for something. That’s when the wheels in her young mind started turning.

Karina Hardee, Katelynn’s mother, said, “She’s very inquisitive and so she started asking me a bunch of questions and I tried to answer as best as I could without too much for a 5-year-old and just explained to her that some people aren’t as fortunate as us.”

She sold cookies in the shapes of a snowman and a snowflake.

Her mother said, “She sat out there for probably about three hours and sold through all all the cookies, all the hot cocoa.”

Then they still had to find out if donating was even possible.

Karina Hardee said, “I just left a note saying my daughter held a hot cocoa fundraiser over the weekend and would love to donate the money to any of the negative accounts.”

The money Katelynn raised paid off the lunch balances for 123 students just ahead of the Christmas season.

Katelynn is seeing firsthand how far an act of generosity can go.

Her mother said, “Her actions do create awesomeness.”

Katelynn was honored by her school with an award for her act of generosity.

CNN Newssource contributed to this report.