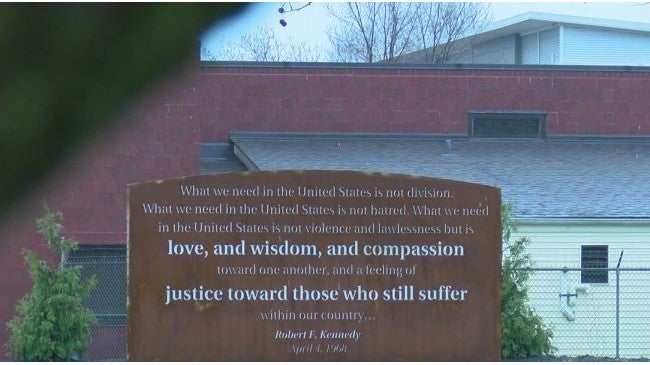 Indianapolis is preparing to commemorate the 50th anniversary of the assassination of Dr. Martin Luther King Jr. with a series of special presentations at the famed Kennedy-King Park on the near west side.

Tuesday, audiences gathered in the Indiana Historical Society theater for a screening of the documentary “A Ripple of Hope.” Completed in 2008, the documentary draws heavily on the footage of Senator Robert F. Kennedy’s speech in Indianapolis the night King was assassinated. Following the film, a panel discussion will be held including Ms. Kerry Kennedy, daughter of Robert Kennedy, U.S. Representative John Lewis, filmmaker Dr. Donald Boggs, and other authors and historians.

Wednesday the commemoration events will begin at 9:30 a.m. with a 150-child youth march led by Ms. Kennedy and Representative Lewis, marching from Old School 27 into Kennedy-King Park. Speakers will address the crowd following the march around 10:30 a.m.

At 5 p.m. the official commemoration event will take place at Kennedy-King Park, including speakers, musical numbers, multicultural presentations, and poetry readings. A community dinner and reception will follow.

For more information on the events, which will go on rain or shine, visit the Kennedy-King Memorial Intiative’s website.

On April 4, 1968 news of King’s death hadn’t fully reached the city of Indianapolis. That evening, Senator Robert F. Kennedy was scheduled to make a political speech on his presidential candidacy at what is know Kennedy-King Park. As the news reached Senator Kennedy, he knew he would likely be the voice who would break the tragedy to the waiting crowd.

“It was impactful to say the least,” remembers Abie Robinson, who was 24 years old on that night in April 1968. Robinson had just finished a term with the Navy and was interested in the political changes happening in Indianapolis.

“That’s how I learned of (King’s) murder, through (Kennedy,)” said Robinson. “The leader of the movement that was making things better, a positive force behind what was happening had been killed.”

Kennedy took the microphone, and with the WISH-TV camera rolling, he began his speech.

“For those of who you are black, and are tempted to be filled with hatred and mistrust of the injustice of such an act, against all white people, I would only say that I can also feel in my own heart the same kind of feeling,” said Kennedy. “I had a member of my family killed. But he was killed by a white man.”

Robinson says this may have been one of the first very public occasions where Bobby Kennedy spoke of the assassination of his brother, the late President John F. Kennedy.

“That night in that moment I went from a feeling of rage and anger and want for revenge in some manner, to realizing and during the course of the speech, the things that he said, the words that are on that wall” said Robinson, referencing the new plaque in Kennedy-King Park, “that that would be contradictory. If you believed in Martin Luther King and what he stood for, his message, how could you act in any other way but in a way that shows you believe it takes love to conquer hate?”

“What we need in the United States is not violence and lawlessness, but is love and wisdom and compassion toward one another,” said Kennedy, a portion of a quote now inscribed on the plaque.

Robinson says since that day, he has felt inspired to redouble his efforts to seek peace in our communities.

“To continue the dream the Dreamer had,” Robinson said, “and see what we can do about making a change in this country and this world.”