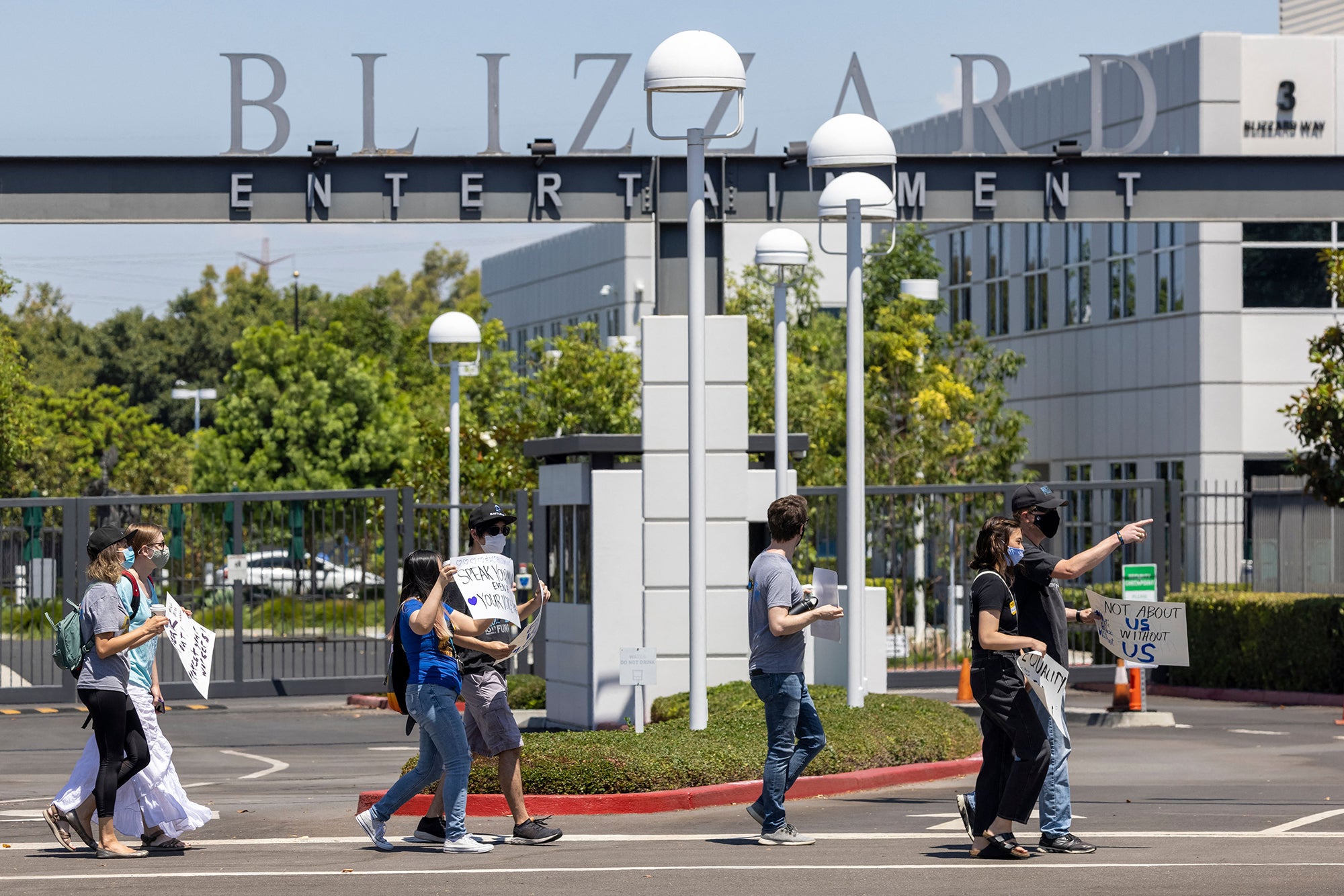 Employees of the video game company, Activision Blizzard, hold a walkout and protest rally to denounce the companys response to a California Department of Fair Employment and Housing lawsuit and to call for changes in conditions for women and other marginalized groups, in Irvine, California, on July 28, 2021.  (Photo by DAVID MCNEW / AFP) (Photo by DAVID MCNEW/AFP via Getty Images via CNN)
by: Rishi Iyengar, CNN Business
Posted: Sep 15, 2021 / 05:52 AM EST / Updated: Sep 15, 2021 / 05:52 AM EST

(CNN) — Activision Blizzard employees have filed a complaint accusing the gaming company of unfair labor practices, alleging that it unlawfully cracked down on their organizing efforts that took place in the wake of widespread harassment and discrimination allegations.

The California-based gaming company “threatened employees that they cannot talk about or communicate about wages, hours and working conditions” and also “engaged in surveillance” and “interrogation” of employees advocating for better working conditions, according to a complaint.

The charge was filed on Friday with the National Labor Relations Board by prominent media workers’ union Communications Workers of America (CWA), both of which shared a copy of the complaint with CNN Business.

Activision Blizzard did not immediately respond to a request for comment.

The company engaged in “worker intimidation and union busting,” CWA said in a statement on Tuesday.

“Activision Blizzard’s response to righteous worker activity was surveillance, intimidation, and hiring notorious union busters,” CWA’s national organizing director Tom Smith said in a statement. “We have filed these charges to ensure that the actions of ABK management will not go unanswered,” he added. (It was not immediately clear how many employees backed the complaint; CWA declined to comment beyond its statement.)

It’s the latest development after months of scrutiny against Activision Blizzard by US government authorities as well as dissent from its own employees.

The backlash began in July with a lawsuit filed by California’s Department of Fair Employment and Housing.

The lawsuit alleged a “frat boy” work culture where multiple female employees were subjected to gender discrimination, sexual harassment, and unequal pay, and that “the company’s executives and human resources personnel knew of the harassment and failed to take reasonable steps to prevent the unlawful conduct, and instead retaliated against women who complained.” (In its initial response to the lawsuit, the company said it would investigate the allegations but also described them as “inaccurate” and “distorted.”)

Several former Activision Blizzard employees had already begun sharing their experiences on social media in the wake of the lawsuit, but the company’s effort to downplay the suit’s claims prompted more than 2,000 current and former workers to sign a petition slamming that response as “abhorrent and insulting.”

Activision Blizzard CEO Bobby Kotick tried to dial the temperature down, admitting in a note to employees that the company’s initial response had been “tone deaf” and that it was hiring an outside law firm to investigate the claims.

But that didn’t stop dozens of employees from staging a walkout at the company’s campus in Irvine, California, with hundreds more joining virtually. Some of the demands included greater pay transparency and an end to mandatory arbitration.

The first high-profile departure from the company was announced last month, when Activision Blizzard COO Daniel Alegre told employees that J. Allen Brack, president of the company’s Blizzard Entertainment studio, would be leaving his post.