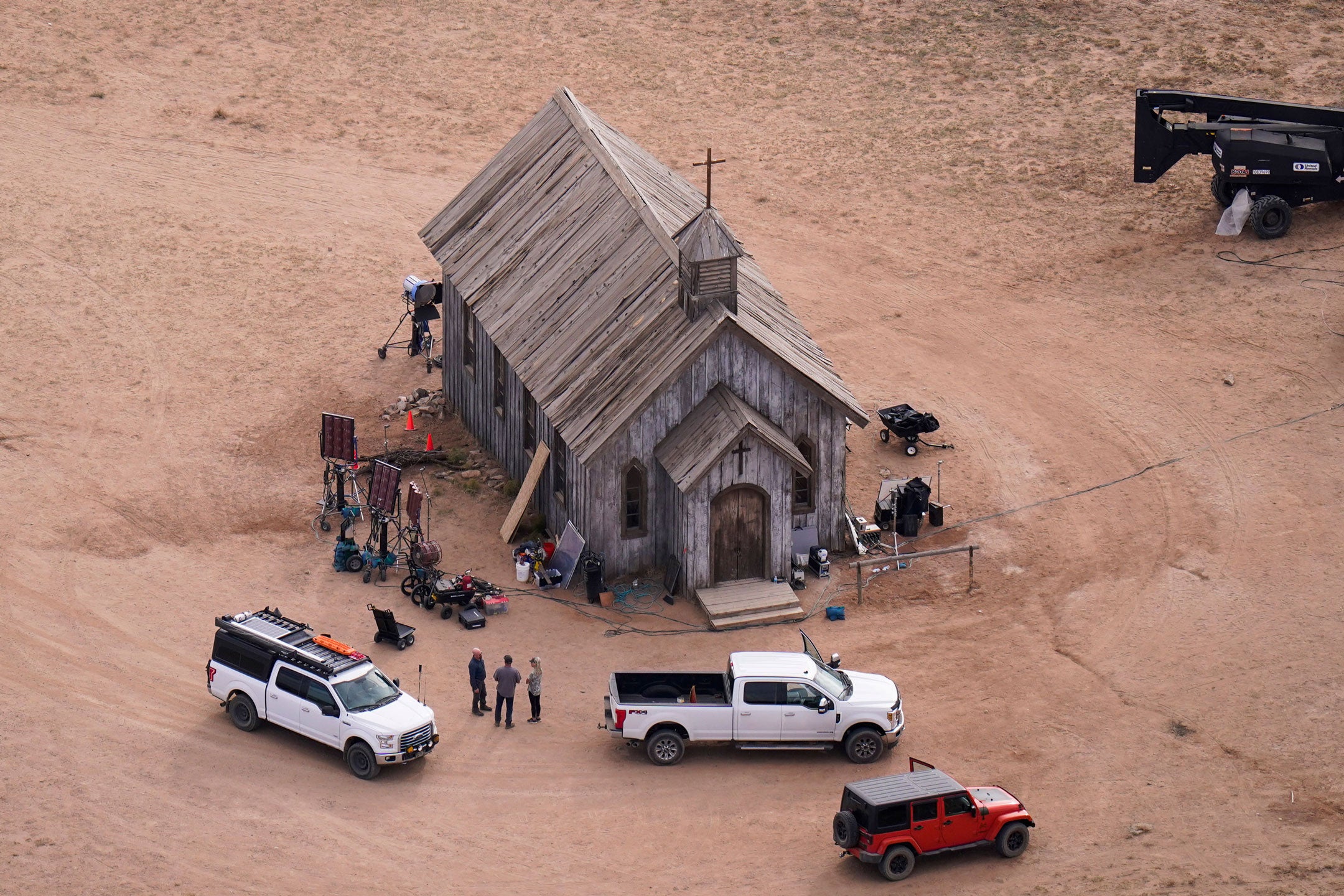 FILE - This aerial photo shows the Bonanza Creek Ranch in Santa Fe, N.M., on Saturday, Oct. 23, 2021. A judge on Friday, Dec. 10, has decided that the assistant director who handed Alec Baldwin a prop gun that killed a cinematographer on a New Mexico film set must make himself available for an interview with state workplace safety regulators. Local news outlets reported that a district judge on Friday granted the state officials' request to issue a subpoena to Dave Halls, assistant director for the movie "Rust." (AP Photo/Jae C. Hong, File via CNN Newsource)
by: Josh Campbell
Posted: Jan 15, 2022 / 06:30 AM EST / Updated: Jan 15, 2022 / 06:48 PM EST

(CNN) — Alec Baldwin has turned over his cellphone to law enforcement officials as part of their investigation into the fatal shooting of cinematographer Halyna Hutchins on the set of the film “Rust,” the Santa Fe County District Attorney’s office told CNN.

A spokesperson for the Santa Fe County Sheriff’s Office confirmed to CNN the actor provided his phone to law enforcement officials in Suffolk County, New York, who have been assisting New Mexico authorities with obtaining the device.

“The Santa Fe County Sheriff’s Office does not yet have physical possession of the data to be retrieved off the Baldwin phone,” Rios added, but noted “this is in process.”

Hutchins was fatally shot Oct. 21 during a rehearsal for a scene in a church at Bonanza Creek Ranch. Director Joel Souza was also injured in the shooting.

Late last year, Baldwin told ABC’s George Stephanopoulos the scene was going to show Baldwin cocking the gun and he and Hutchins were going over how she wanted to position his hand before the gun went off, saying then, “I would never point a gun at anyone and then pull the trigger.”

Aaron Dyer, Baldwin’s civil attorney, confirmed in a statement to CNN his client voluntarily turned over his cellphone to authorities Friday morning.

“But this matter isn’t about his phone, and there are no answers on his phone. Alec did nothing wrong. It is clear that he was told it was a cold gun, and was following instructions when this tragic accident occurred,” Dyer said in the statement.

“The real question that needs to be answered is how live rounds got on the set in the first place,” the statement added.

What officials are looking to obtain

A search warrant was issued for Baldwin’s cellphone last month, according to court documents from Santa Fe County, New Mexico.

Officials are looking to obtain messages, call logs, digital photos and videos, as well as any private messages sent on social media platforms in relation to the production of “Rust,” the warrant said. It also looks to obtain any deleted videos, photos and messages on the phone having to do with the movie.

In a video posted on his Instagram account earlier in January, Baldwin said he was cooperating with authorities, saying the process of authorities requesting his phone for the warrant takes time and they have to “specify what exactly they want.”

The actor added any suggestion he was not complying with the search warrant was “a lie.” In the video, he went on to add he is “working toward, insisting on, demanding” the truth about what happened.

Dyer said last month the actor was cooperating with authorities and they were confident the evidence will show the actor was not responsible for what happened.

Hannah Gutierrez Reed, the armorer on the set, loaded the gun with what she thought were dummy rounds before Baldwin used it on set, lawyers for the armorer had said in November.

Jason Bowles, Gutierrez Reed’s lawyer, said at the time there was a box of dummy rounds labeled ‘dummy’ and the armorer took from that box and loaded the handgun “only to later find out — and she had no idea — she inspected the rounds, that there was a live round.”

“Now we don’t know, however, whether that live round came from that box. We’re assuming it did,” Bowles said.

In the complaint filed this month, Gutierrez Reed accuses PDQ Arm and Prop, LLC and its founder Seth Kenney of violation of trade practices, false and deceptive product labels, and false and material misrepresentations after, Gutierrez Reed alleges, Kenney sold her a cache of dummy ammunition with live rounds mixed in.

The complaint also includes allegations of wrongdoing by several others involved in the production.