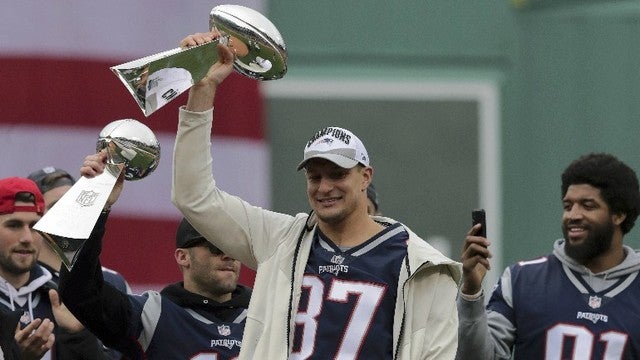 In a post on the team’s official Twitter page, video from the event shows Gronkowski holding the Lombardi Trophy, which was sporting a baseball-sized dent, during an appearance at the Boston Red Sox home opener on April 9.

.@RobGronkowski left a mark on this organization.

According to several players on the team, Super Bowl LIII MVP and Patriots wide receiver Julian Edelman was preparing to throw the first pitch of the game with Gronkowski and cornerback Stefon Gilmore.

When he told his teammates he needed to warm up, Gronkowski decided to utilize the trophy as a make-shift baseball bat.

“We’re thinking, ‘He’s not going to swing the bat,'” safety Duron Harmon said. “‘He’s not going to do it.’ And literally at the last second, when he throws the ball, we see him go from a batting position to a bunt.”

It was the “ding” heard around Patriots nation when the baseball made contact with the trophy, leaving a huge dent on the back of the trophy’s football.

“Everybody went wild, like the bunt just won us the World Series,” cornerback Jason McCourty said.

Teammates said after it happened, both Edelman and Gronkowski said they would pay for the cost of repairs, but Stacey James, the Patriots vice president of media relations, said for now the franchise will “keep it and tell the story.”

“If anybody could do it and get away with it, it’d be Mr. Gronkowski,” Harmon said.