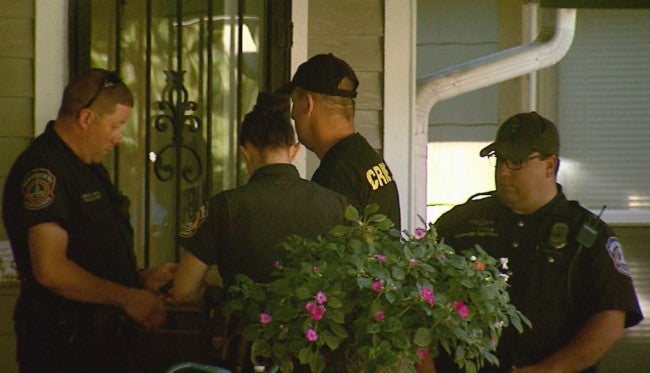 INDIANAPOLIS (WISH) — The Guinn family has lived in their Emerson Heights home since 1985. The couple has been married even longer, 45 years to be exact.

“We trust each other and we enjoy each other’s company,” said Paula Guinn.

On Tuesday night, a woman did not enjoy the company of three men that forced their way inside her home on the 700 block of North Emerson. Once inside, the men pointed their guns at a woman and demanded items.

The suspects snatched firearms and other items as they made their way out of the home. Police were left with only vague descriptions of the suspects.

“I don’t know if they are looking for drugs or money, or money for drugs, I don’t know what. It’s a shame they have to go and break in people’s homes,” said George Guinn.

The invasion happened in the same week and less than a mile away from another home invasion. On Monday in the 700 block of North Bosart, a suspect pulled a gun on a homeowner. In return, the homeowner pulled a gun and shot the suspect.

In the Guinn’s neighborhood, neighbors hold regular neighborhood watch groups. In some cases, residents are being asked to walk together as couples during the evening to watch for suspicious activity.

Despite the proximity of the two home invasions, the Guinns don’t appear to be phased by the investigations. Mostly, the couple will tell you that their neighborhood remains quiet, despite an occasional issue here and there.

“I don’t see anything bad about this neighborhood,” said Paula.

Police are still looking for information in the North Emerson home invasion. Anyone with information about this incident is urged to call 911, or if you wish to remain anonymous, call Crime Stoppers at 317-262-TIPS (8477).  Callers can also text “INDYCS” plus tip information to 274627 (CRIMES).

We Stand Together / 42 mins ago