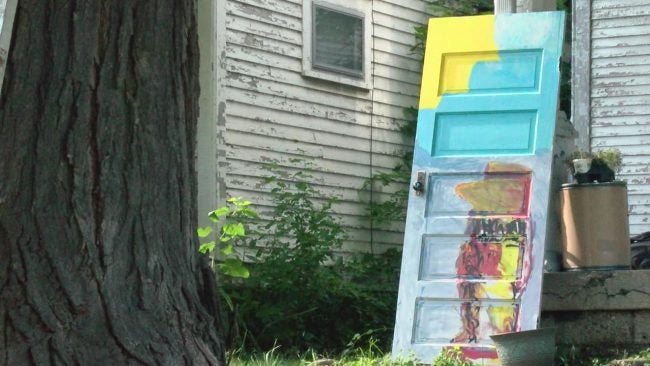 INDIANAPOLIS (WISH) — Local artists are working on a project to engage and inspire people living in the United Northwest Area and they’re using old doors.

DeAmon Harges and several others came up with the idea for the “Door Project” after finding a bunch of old doors in an alley.

They wanted to do something that would get their neighbors involved and most are getting paid to be creative.

“They love doing the doors you know and I think one of the things that we discovered is that people like to tell stories,” said DeAmon Harges, artist.

Harges said the stories came from people living in the United Northwest Area.

“We start discovering what’s here already that most people don’t know and we discovered a bunch of artists,” said Harges.

Harges and others are working on several art installations to highlight their neighborhood. The Door Project even received a $67,000 dollars grant from Reconnecting to Our Waterway to pay people to create the work.

“We want you to not just look at this as a grant to bring artist from the outside what we wanted to do is to support artists from the inside and the first thing you do is to incentivize to recognize and celebrate them.”

Harges said each artist will have to sign a contract. They will get paid $150 for a large door, $75 for a medium door and $50 for a small door. Some artists are feeling inspired by the project.

“Art itself is always meditative kind of practice so just working on this piece or any other piece is always like a relaxing moment,” said Jamahl Crouch, artist.

Crouch is just one of many artists working on a door.

He just finished his first one and is now working on his second.

“This particular door is based on the concept of time, so at the bottom you have this guy who’s holding up this hour glass,” he said.

Crouch said each door and design tells a different story about someone’s perspective on life in the United Northwest Area.

“You’ll start to see a lot of people you know personal struggles and personal victories just kind of show through these pieces,” said Crouch.

Harges said once the 50 or more doors are completed, it will be part of a labyrinth in September. They still have to finalize a lot.