Local website hacked by someone claiming to be ISIS 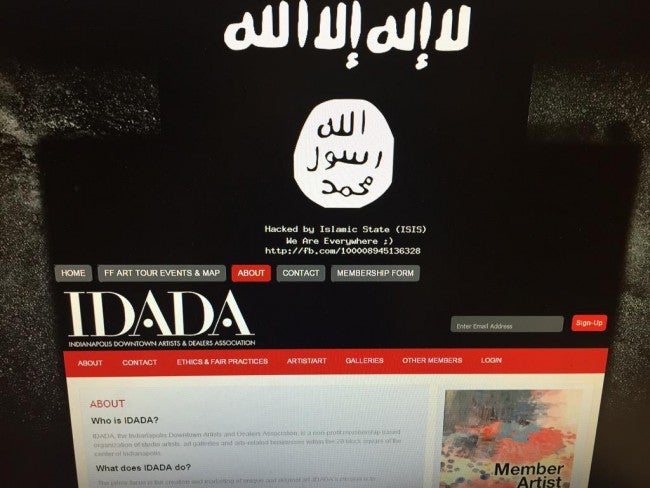 INDIANAPOLIS (WISH) – Hackers claiming to be with ISIS have taken over the Indianapolis Downtown Artist and Dealers Association website.

IDADA is a local art nonprofit. When someone visits its website, the ISIS logo and Arabic writing appear at the top of the page and then music begins playing. The website also has a message in English that says “Hacked by the Islamic State (ISIS). We are everywhere ;)”

Indianapolis Department of Homeland Security Chief Gary Coons said several other websites in Indianapolis have also been hacked. Coons did not release the specific websites, because it is an active investigation. Coons told 24-Hour News 8 that Homeland Security has not confirmed these hacks are actually ISIS.

Homeland Security is working to restore the sites and find out who is behind the hacks.

The hacks reached beyond Indianapolis this weekend. Several other businesses in Cincinnati, Dayton and Pittsburgh, Pennsylvania were also hacked.

In Pittsburgh, Eyeflow.com had the same logo and Arabic writing as IDADA’s website. The company’s founder says the business may have been targeted because of its global charity work.

“When you hear of beheadings and things, you don’t think ISIS can actually affect you. It’s kind of this other world over there. This is the first time it’s hitting home, like ‘wow ISIS can get their tentacles over here,'” said Eyeflow.com CEO, Phil Laboon.

That business got its website back up within a few hours, and it’s working with the FBI to help track the source. The CEO says the company will enhance its website security on Monday.

IDADA released a statement Monday afternoon that indicated the organization was working with the FBI and the website would be down for a while.

“We never thought we would be thrust into global current events, especially of this subject matter. We do not feel this was a personal attack on Indianapolis Artists – as shown through national headlines,” the statement said. “We just seem to have been hit as randomly as the next organization. The private information of our members was not compromised, so we do not feel our members should have any reason for concern there.”

The hack message also included a link to Facebook. The public version of the page doesn’t show much, and most of it is in Arabic. The person does belong to several online hacking groups.

“You monitor social media, you see what ISIS is hitting and what they’re targeting on the computer, and you try to monitor that as closely as you can,” said Coons.

Coons said they are no known threats here locally, but the department is still monitoring these websites and social media. Coons recommended everyone with websites keep a close eye on them, and report anything out of the ordinary.

“They’re (ISIS) constantly looking for vulnerabilities in people’s websites – especially facing websites that they know people will go to so they can get their message out,” said Coons.

David Carlson, Religious Studies Professor at Franklin College, said many of the targets are young people between 18 and 29 years old who may have been bulled in some way.

“ISIL comes along with its capacity to use social media,” said Carlson.

“I’m not surprised that that’s the way recruitment is going,” said Victoria Zeiner, a Franklin College student. “If your target is that young age group … it’s a way to get right in front of our faces.”