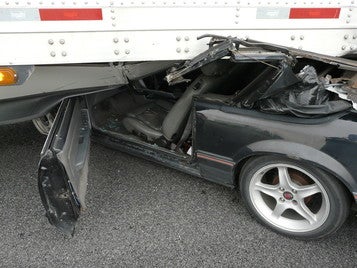 HUNTINGTON COUNTY, Ind. (WANE) — A New Haven man is lucky he was not seriously hurt after getting stuck under a moving semi-trailer.

Indiana State Police said the 40-year-old driver lost control of his car and went under the trailer.

The crash happened shortly after noon on I-69, north of the Markle exit.

According to ISP, the semi driver did not realize the Mustang was wedged under his trailer and kept driving for another half mile.

The car driver was able to get himself out of his car and refused medical treatment.