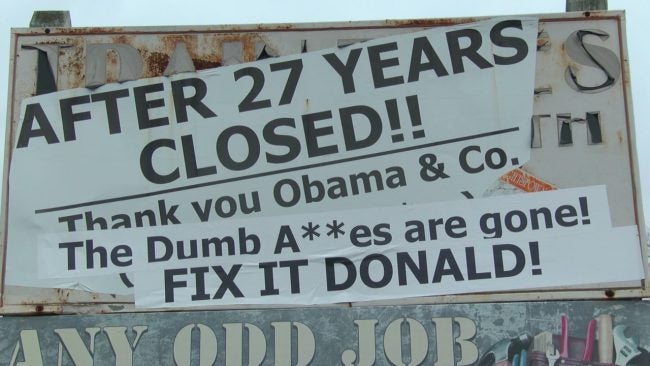 KNIGHTSTOWN, Ind. (WISH) — A political sign at an old business in Knightstown is causing controversy with some people living in the community.

The owner of the old business put up the sign more than three years ago but recently made some changes. He had a message for the Obama administration when his railroad business closed after 27 years. This past weekend he put up a new sign for the Trump administration.

But some people living in town said they are hoping to turn this sign into something else.

“There’s a lot of people offended by the sign,” said Amanda Abott, a resident. “They say it makes the town looks bad and trashy, and we just want to do whatever we can do to help.”

The sign is right across the street from the Speedway gas station on Main Street in Knightstown. The message overlaps the name of business, Carthage Knightstown Shirley Railroad, which used to be a staple in the community.

“It was a great attraction, lots of kids used to come,” Abott said, “They did a pumpkin patch, and it was just really good memories. They did a train robbery.”

Abott said she and her family know the owner of the railroad. The Carthage Knightstown Shirley Railroad or CKS stopped running in 2013 because of the economy.

“It’s his property; he could do whatever he wants with the sign,” said Abott. “But the sign did make me think that maybe he needs help to get the railroad started again.”

Abott and other people in town are hoping to come up with a plan to get a different message across.

“We want to try to make a negative into a positive like we did with the cross situation,” said Kevin Richey, resident.

Abott and Richey are part of a group called the Matthew 5:40 movement. It was just last December when a man filed a lawsuit against the town of Knightstown. The man claimed the cross on top of the town’s Christmas tree violated his First Amendment rights.

Richey said the group turned around and raised money for the man’s family after learning about their hardship.

“I want the world, the community, and the nation to know just how great this town is and how we reach out to others in need,” Richey said. “Whether they want the help or not, we got to make the attempt,” Richey continued.

Richey said he’s now planning to reach out to the owner of the railroad to talk about the sign and what they can do help.

“We want to see what we can do to listen to really what his needs are and whether to sell the property or perhaps another sign honoring the railroad history in this town,” he said.

24-Hour News 8 talked with the owner of the railroad on the phone. Tom Allison said since the sign went up years ago, he only had nine formal complaints. He said the property is still for sale. As for the sign, Allison said he’s optimistic about the new administration.