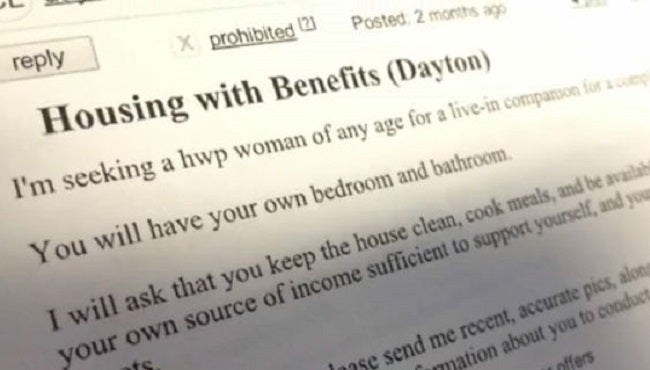 The station has been digging into this story for months, finding ads like these on Craigslist, locally. They all are advertising free rent if the person provides sex, is a friend with benefits or a bed partner. But we found it’s potentially illegal, dangerous, and hard to prosecute.

“This one is saying they want a live-in companion. You get your own bedroom and bathroom. All you have to do is cook the meals, clean the house and be available for me sexually,” read Detective Melanie Phelps with the Montgomery County Sheriff’s Office.

The people who wrote these ads are looking for a roommate in the Miami Valley area, but not just any roommate.

They say they want a friend with benefits, an open minded white female or bed partner. All offering what appears to be sex for a free room.

We found that can be illegal.

“There is an implication that could be criminal by the place of the ad. They are asking someone for sex for rent, but prosecuting that on the ad itself would be difficult,” said Dayton Assistant Prosecutor Andrew Sexton.

He said the wording of the ad plays a big part in the legality of it. If the entry actually says “sex” in it, it’s getting close to being illegal but using the phrase Friends with Benefits is harder to prove.

Ultimately, Sexton said the ad itself is not illegal, but if that ad is answered and sex is involved in exchange for rent. that’s prostitution..a crime in the state of Ohio. and it doesn’t matter if both people agreed to it.

“The problem isn’t the consensual act between the parties, it’s the fact that it’s done for hire with something of value. In these cases it’s rent,” said Sexton.

Detective Phelps is in charge of the Montgomery County sex trafficking unit and goes undercover. She said the reason these ads are so concerning is because they could be targeting young women who have no other options.

“When you look at living on the street or living in somebody’s house and OK I sleep with him occasionally but I’m safe, I’m warm and I have food, so sometimes it comes down to the basic need of the individual,” said Phelps.

Both Phelps and Sexton believe ads like these could open up another avenue for sex trafficking.

“It’s a good situation for them at the beginning and then it becomes dangerous, it becomes violent and it turns into a situation where they are there against their will,” said Sexton.