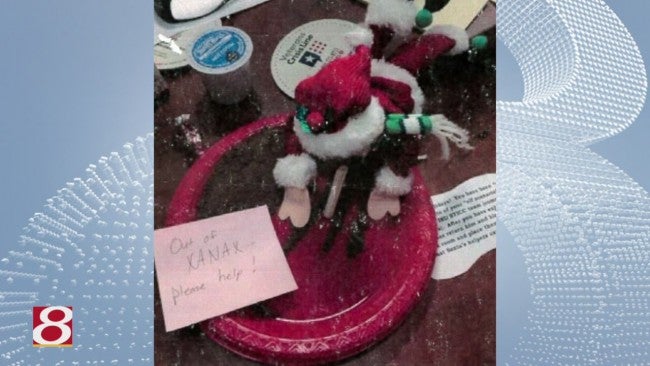 INDIANAPOLIS (WISH) – Several veterans are outraged that a social worker at the Roudebush VA Medical Center still has her job.

That anger stems from what the VA considers an “inappropriate email” she sent to her co-workers. There were words and pictures in it that appear to poke fun at veterans struggling with mental health problems and suicide.

The pictures were taken inside the seamless transition clinic at Roudebush in Indianapolis. The clinic helps returning vets transition to life back home.

Robin Paul manages the clinic and sent the email to her co-workers.

“It makes me sick, it makes me angry, very angry,” said John Thomas. He served in the Korean and Vietnam Wars and is one of the leaders at American Legion Post 249 in Indianapolis.

“I can’t understand anybody who would do anything like this to us.”

The first picture shows the elf acting as a gynecologist towards a female doll.

The next shows the elf “self-medicating” after he didn’t get his requested prescription. A post-it note in the picture reads “out of Xanax, please help.”

Another picture depicts the elf hanging from Christmas lights by its neck. The caption reads “caught in the act of suicidal behavior.”

“I can’t stress enough how this would hurt the family, the veterans, and anybody around them,” he said.

“I would like to sincerely apologize for the email message and I take full responsibility for this poor judgment. I have put my heart and soul into my work with Veterans for many years. I hold all Veterans and military personnel in the highest regard and am deeply remorseful for any hurt this may have caused.”

VA representatives said the incident has been handled internally. Paul still has her job. But Ken Hylton, the commander for Indiana’s American Legion, thinks she should resign or be fired.

“I’m not too sure that an apology is enough in some cases,” he said. “We at the American Legion, Department of Indiana believe this sort of insensitive behavior alongside abuse of government time and equipment should not be tolerated whatsoever.”

Even though she apologized, Hylton wants her to take it a step further. He said, “Not only does she owe us as veterans, she ought to think she owes her clients and her patients a deep apology.”

“This is just too much,” added Thomas. “We need to do something about it. and hopefully Commander Hylton will get his wishes.”

The Indiana American Legion is also upset at the timing of this issue. The email was sent last December but no action was taken until news of it came out Monday.

“The Indianapolis VA Medical is committed to treating our Veterans and the health conditions they face with the utmost respect and compassion. Our mission is to provide the highest level of medical and mental health care which is not reflected in the email. The email is totally inappropriate and does not convey our commitment to Veterans. While we cannot comment on specifics due to confidentiality, the matter had been administratively addressed. We apologize to our Veterans and take suicide and mental health treatment seriously, striving to provide the highest quality.”